The alleged Israeli rejection of the Hamas offer came against a backdrop of reports suggesting that progress has been made towards striking a prisoner swap deal. 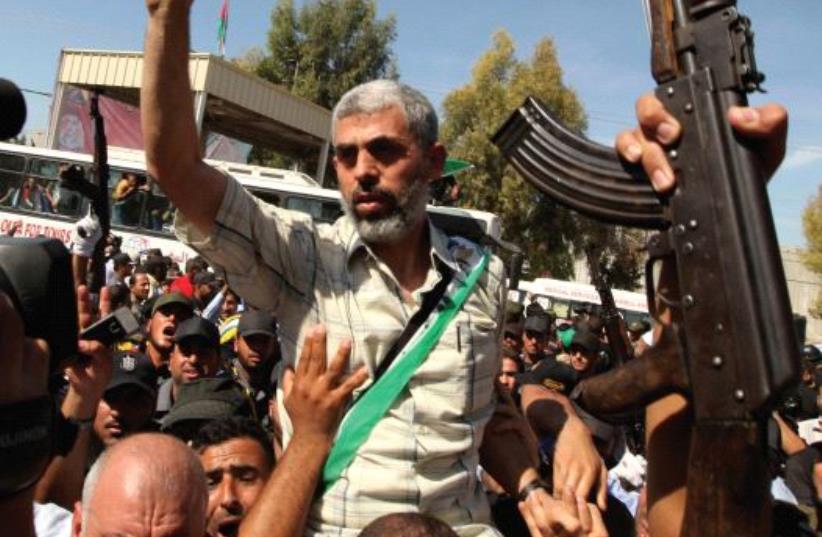 Yahya Sinwar arrives at the Rafah crossing between Egypt and Gaza on October 18, 2011, after being released by Israel as part of a prisoner swap for kidnapped soldier Gilad Schalit
(photo credit: REUTERS)
Advertisement

A senior Hamas official claimed on Monday that Israel has turned down an offer to receive information about the condition of four Israelis held in the Gaza Strip in return for the release of Palestinian prisoners.

The offer was relayed to Israel through the Egyptians, who continue to serve as mediators in the indirect negotiations between Israel and Hamas to reach a prisoner-exchange agreement.

The alleged Israeli rejection of the Hamas offer came against a backdrop of reports suggesting that progress has been made toward striking a prisoner-swap deal.

Last week, Egyptian General Intelligence Chief Abbas Kamel was quoted as saying he speaks every day to Israel and the Palestinians on several issues, including a potential long-term ceasefire deal that would include a prisoner exchange agreement.

Kamel said such a deal should start with the release of elderly, female, teenage and sick Palestinian prisoners held in Israeli prisons.

A guard is seen at an observation tower along a wall of Gilboa Prison, from where six Palestinian prisoners escaped, on September 6. (credit: AMMAR AWAD/REUTERS)

In September, Hamas proposed what it described as a “road map” for reaching a prisoner exchange deal with Israel. According to the road map, Israel would release an unspecified number of prisoners, especially the elderly, females, teenagers and the sick, in return for information about the condition of the four Israelis held by the Gaza-based terrorist group.

But Khalil al-Hayya, head of the Arab and Islamic Department in Hamas, claimed that Israel has rejected the Hamas proposal.

“We called it a humanitarian deal,” Hayya said in an interview with the Qatari-owned Al Jazeera network. “We are talking about the release of the women, children and the elderly, as well as sick prisoners.”

Hayya refused to reveal the number of Palestinian prisoners his group is demanding in exchange for the bodies of IDF soldiers Hadar Goldin and Oron Shaul, who were killed during the 2014 Israel-Hamas war. Hamas is also believed to be holding two Israeli citizens, Hisham al-Sayed and Avera Mengistu, who entered the Gaza Strip on their own in 2014 and 2015.

Hayya refused to provide any details about the condition of the four Israelis, but said Hamas does not distinguish between Israeli soldiers and civilians.

“They are Israelis who carried out security and military activities in the service of Israel,” he said. “We don’t talk about the condition of the four. This is part of the negotiations [with Israel].”

The Hamas official expressed dissatisfaction with the lack of pressure on the Israeli government from the Israeli public to secure a prisoner-exchange agreement with Hamas.

“Apparently, there isn’t enough pressure from Israeli society,” Hayya lamented. “It seems those we are holding are not important for Israel. The Israeli army does not care about them; the Israeli society also does not seem to care.”

Hayya said that by rejecting the Hamas “humanitarian deal,” Israel was hindering any progress in the indirect negotiations held under the auspices of the Egyptians.

“There is no progress on this issue because Israel is placing obstacles,” he said. “We presented a road map, and we insist on it. We are ready to move forward as soon as possible, but Israel must be prepared to pay the price. Unless Israel pays the price, its prisoners will not see the light.”

Hayya threatened that Hamas will be forced to “kidnap” Israeli soldiers to secure the release of Palestinian prisoners in wake of Israel’s alleged rejection of the offer.

“The Palestinian prisoners held by Israel are prisoners of war,” Hayya argued. “Israel has left us no means to free our prisoners other than kidnapping soldiers.”