Easy Dent has selected the most professional dental clinics in Romania and Moldova. The trip abroad is carried out with five to 10 patients who are accompanied by a professional from Easy Dent. 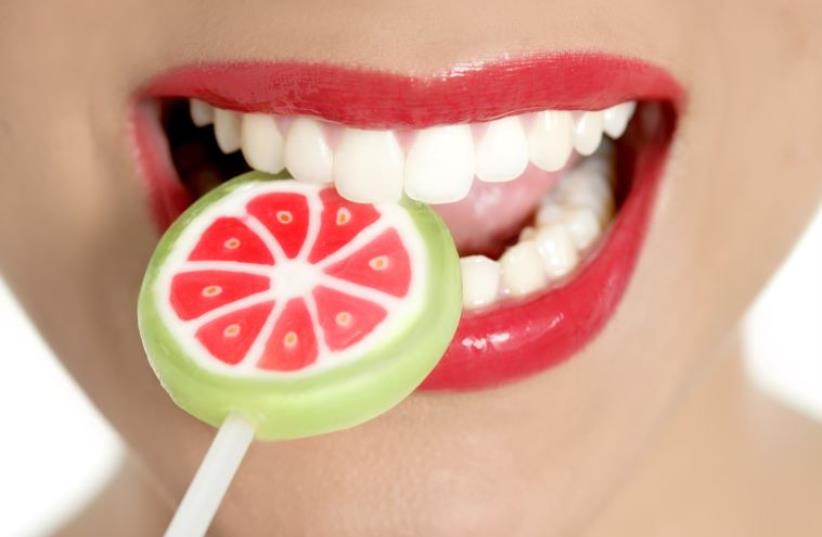 A woman with perfect teeth chews on a lollipop
(photo credit: INGIMAGE)
Advertisement
After Rami Levy’s prices put the big chains in their place, Cofix slashed the prices of espresso, and low-cost airlines dramatically reduced the prices of overseas flights, businessman Benny Rosenberg has started the next price revolution in Israel in the field of dentistry.Rosenberg is offering complex dental treatments at qualified dental clinics abroad, at prices ranging from 40%-50% compared to dental treatments in Israel, with the price including flights, hotel accommodation and guidance for the complex dental treatments, such as crowns, dental implants and surgical surgery.The treatments are performed at Israeli-certified dental clinics in Romania and Moldova, while Rosenberg’s company, Easy Dent, has clinics that provide pre-dental work before traveling abroad and the medical follow-up after the client’s return to Israel. Easy Dent has selected the most professional dental clinics in Romania and Moldova. The trip abroad is carried out with five to 10 patients who are accompanied by a professional from Easy Dent throughout the entire process.In a pilot conducted by Easy Dent in the past year, the patients had complete satisfaction in the process, and by 2020, the company expects to bring about 350 patients for dental care abroad.An Easy Dent survey showed that due to the high cost of complex dental care in Israel, more than 30% of Israelis who need dental care are unable to pay the required costs, neglecting their dental health.