Delivering opening remarks, Yuval Rotem, director-general of the ministry said youth spend some nine hours a day on social media so there needs to be a coordinated response. 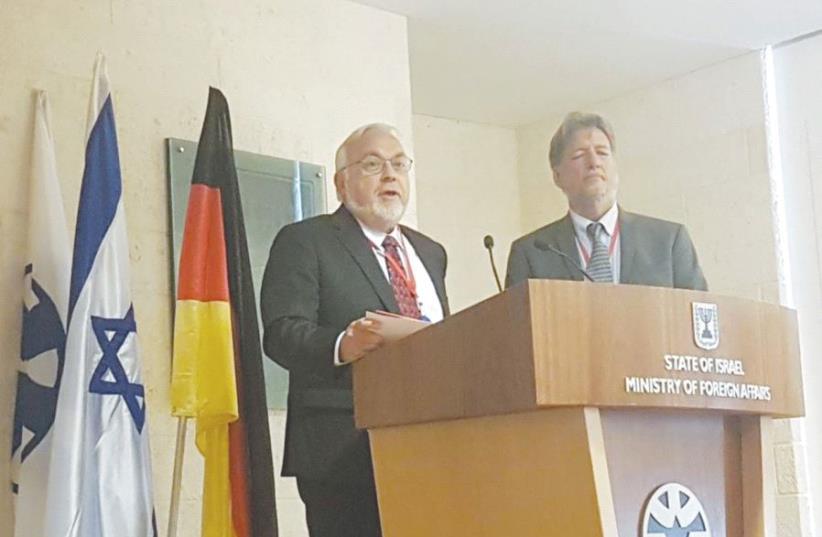 RABBI ABE COOPER, associate dean of the Simon Wiesenthal Center, addresses the ‘EchoChamber Conference’ at the Foreign Ministry in Jerusalem yesterday.
(photo credit: FOREIGN MINISTRY)
Advertisement
“There will be no progress in the fight against terrorism unless we all agree that there is one standard, no matter who the perpetrators and targets are,” Rabbi Abe Cooper, associate dean of the Simon Wiesenthal Center, said Monday at a conference about cyber hate speech at the Foreign Ministry in Jerusalem.Looking to the refrain that “what starts with the Jews never ends with the Jews,” Cooper said: “All efforts will be for naught when the people of Israel are continuously subjected to a double standard.”He referred to a recent BBC headline that made the Palestinian perpetrators of Friday’s deadly knife attack in Jerusalem appear to be the victims while ignoring the death of an Israeli border police officer.Titled the “EchoChamber Conference,” the event was a collaboration between the Simon Wiesenthal Center, the German foundation Konrad-Adenauer- Stiftung’s Israel office and the Foreign Ministry.Delivering opening remarks, Yuval Rotem, director-general of the ministry said youth spend some nine hours a day on social media so there needs to be a coordinated response.“This is what the new generations base their narratives on and this means we need to adapt... one of the main challenges is the rise of hate speech and the use of social media for promoting terror. If incitement and terror are becoming global, then so should our response,” he said, stressing the need for global cooperation through a wide coalition of different entities.Julia Klöckner, a German MP and Christian Democratic Union (CDU) deputy chairwoman agreed. “It is our chance to influence the future and be a good example for the young people,” she said.Noam Katz, deputy director- general of the ministry’s Media and Public Affairs Division, called the digital revolution a real achievement for humankind, but said “with the good things come the bad” and that there must be a “reassertion of authority by states.”“They bear responsibility for the welfare of their citizens.All stakeholders need to work together with the Internet companies and civil society, which are the real stakeholders. It has to be a joint effort.”A key principle in that effort, he said, is transparency.Discussing the question of increased government regulations on social media, Cooper told The Jerusalem Post it’s a battle between “which big brother” is preferable, and suggested that perhaps just the threat of increased government control would spur the social media companies to be more proactive in countering hatred and incitement on their platforms.He also expressed concern about the impact of the “echo chamber” in the political arena whereby the opinion of young people are manipulated by the content available to them.“That’s not really freedom,” he remarked, warning: “We’re in for a rough ride.”