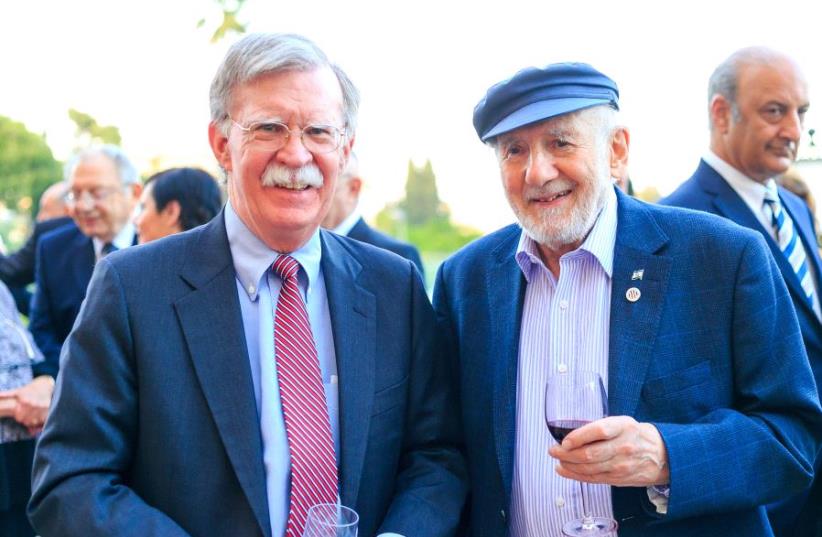 Walter Bingham poses with former US ambassador to the UN John Bolton, whom he has interviewed on his radio program
(photo credit: Courtesy)
Advertisement
Among Anglo-journalists working in Israel, Walter Bingham, a Jerusalem-based radio talk show host, has long been regarded as something of an institution.At the age of “93 and 150 days,” as he tells it, Bingham still tirelessly covers breaking news events and is frequently front and center at important press conferences – always armed with his large black tape recorder and microphone.Indeed, Bingham can regularly be seen during the best and worst of times, fearlessly canvassing the capital’s streets with his omnipresent recorder, black cap and white beard – occasionally with a licensed, loaded sidearm.Last week, Bingham, who was born in 1924 in Germany – which he narrowly escaped in the Kindertransport at age 15 to London, where he became a Military Medal winner during the invasion of Normandy – was awarded a Guinness World Record as the world’s oldest living radio talk show host.On Monday, Bingham, who emigrated from London in 2004 and currently hosts two weekly broadcasts – Walter’s World and The Walter Bingham File – on Israeli National Radio and Israel News Talk Radio, respectively, described his circuitous path to Israel.“I was in Germany during Kristallnacht and escaped with 7,500 other children to England. But I was brought up strictly Zionist and my dream was always to live in Israel,” said Bingham.But it wasn’t until the age of 80, nearly 15 years after his wife died, that the great-grandfather of two made the move, two years after his daughter – his only child – made aliya from South Africa.“I decided that I was getting old and didn’t have anybody in England except my grandson, who I didn’t want to be a burden to, so I decided to be near my daughter in Cape Town, but she said, ‘Don’t bother Daddy, I’m making aliya.’ And a couple years later I followed.”Asked how it feels to be the oldest working radio talk show host in the world, Bingham replied: “On a good day I feel like I’m 40, and on a bad day, like 50.”Still, he concedes that the many hills of Jerusalem have become progressively more difficult to walk.“In Jerusalem, all roads only go uphill, and every week they get steeper,” he said with a chuckle.Bingham, a licensed pilot, who studied political science at London University and worked as a fashion model and film actor – including two small roles as a wizard in the first two installments of the Harry Potter series – said he embarked on his journalism career in radio 50 years ago.“After writing for a few local papers, I hosted Jewish radio programs at two stations in London,” he said.“One of the broadcasts was eventually for Israel National Radio where I still have a show called ‘Walter’s World’ every week,” he continued. “After I made aliya, I started a weekly program called ‘The Walter Bingham File’ on Israel News Talk Radio, which is a Fox News affiliate.”Bingham has gone on to broadcast nearly 1,000 programs in Israel about subjects ranging from politics, security, culture, education and general-interest pieces.He said a colleague first approached him about the Guinness Prize category for the world’s oldest living radio broadcaster two years ago, but was informed that there was someone older than him still broadcasting.Last July, Bingham took another shot at the title and submitted a second application, which Guinness accepted and approved. On June 4, he was officially contacted by the prize committee to confirm his winning designation.Despite achieving the prestigious award, he was decidedly modest.“It’s just another piece of paper you can hang on the wall, but it is interesting,” he said. “And I doubt that someone will catch up to me anytime soon.”Asked the most important lesson he learned as a broadcaster, Bingham cited adaptability, the value of research and being aggressive when necessary.“You have to adjust your interviews,” he said. “Sometimes you have confrontational interviews when you must be aggressive, and sometimes you have interviews that are friendly, so you have to adjust your style. But, as a journalist, I always believed that if they throw you out the front door, you have to get in through the back.”Among Bingham’s favorite broadcasts are interviews with such notables as former US ambassador to the UN John Bolton, attorney Alan Dershowitz and columnist Charles Krauthammer.Bingham hopes, however, his new award will give him the necessary journalistic capital to land two more interviews.“Once I have the certificate, I think I should get interviews with President [Reuven] Rivlin and the prime minister,” he said.“I think that with this qualification, I should be able to do it.”