Orly Levy-Abecassis will remain a lawmaker, without membership in any faction. 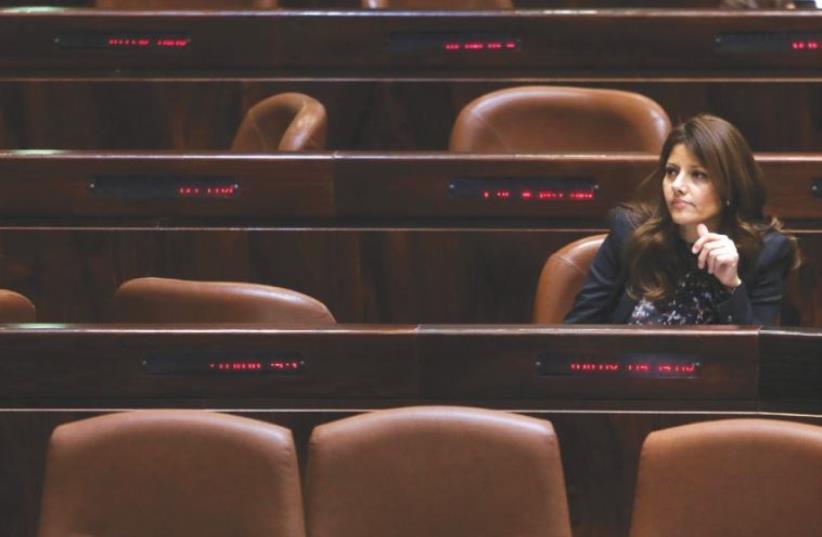 MK ORLY LEVY-ABECASSIS is pictured alone in the Knesset in this photo from January 2015
(photo credit: MARC ISRAEL SELLEM)
Advertisement
The Knesset House Committee voted 10-2 on Wednesday to approve Yisrael Beytenu’s request and declare that MK Orly Levy-Abecassis has quit the party. Orly Levy-Abecassis will remain a lawmaker, without membership in any faction.The primary consequence is that if Levy-Abecassis does not resign from the Knesset, she will not be able to run in the next election with any of the parties represented in the current legislature.In a detailed letter in February, Yisrael Beytenu faction chairman MK Robert Ilatov told House Committee chairman Yoav Kisch (Likud) that Levy-Abecassis has been acting independently and in many occasions voted against Yisrael Beytenu’s stances. Ilatov provided several examples in the letter that demonstrated her separation from the party.“The matter is clear, as has been said many times and demonstrated daily by her actions in the Knesset, MK Levy-Abecassis never decided to do the right thing and officially resign from the faction of her own will, or at least resign from the Knesset and return the mandate that was given to her by our constituents,” Ilatov wrote.Levy-Abecassis told the House Committee that disappointment with her party for not insisting on social legislation as a condition for joining the coalition in May 2016 had led her to act with disdain for her party’s guidelines.“[Yisrael Beytenu party chairman] Liberman denied the fact that he was conducting coalition negotiations, while doing so without talking about social issues,” she said. “I was not changing my positions for personal benefit – it was the party chairman who neglected our social agenda that we were elected to serve. They are acting out of revenge here [by asking to remove her from the Knesset faction].”Ilatov responded to Levy-Abecassis and said her announcement that she refuse to not join the coalition, ahead of Yisrael Beytenu signing the coalition agreement, harmed efforts to include social issues in the agreement.