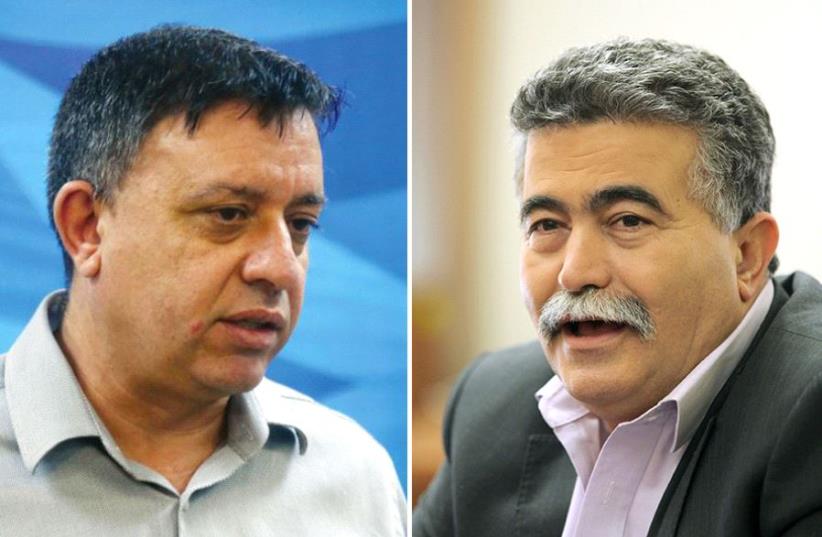 Gabbay and Peretz
(photo credit: MARC ISRAEL SELLEM)
Advertisement
Former environmental protection minister Avi Gabbay, who made a point of limiting himself to a clean campaign in the first round of the Labor leadership race, changed his tune and fiercely attacked his competition, MK Amir Peretz, over the weekend.In a debate between the two candidates in Monday’s runoff race on Channel 2 Saturday, Gabbay accused Peretz of misleading the public when he says that he beat Prime Minister Benjamin Netanyahu in the 2006 general election.He reminded him that while Labor under Peretz did receive more Knesset mandates than Netanyahu’s Likud, he was beaten by Kadima under Ehud Olmert.“You lost to Ehud Olmert, and he wasn’t a major politician,” Gabbay said. “As the head of the Histadrut, you allowed Netanyahu to abuse the citizens. If you lost to Olmert, it’s hard to see how you could beat [Yesh Atid chairman Yair] Lapid,” When Peretz predicted that if he would win Monday’s race, polls would give Labor 22 seats, Gabbay responded that there are polls indicating that only 6% of voters see him as fit to be prime minister.“This is a sign that there is a problem,” Gabbay said.Gabbay told Peretz, “People are disgusted by your politics.”Peretz told him that it would not hurt him to be more modest.In an interview with Yediot Aharonot, Gabbay mocked Peretz’s argument that his main advantage over Gabbay is his experience.“After not succeeding in getting to power in 35 years, as he rolled between parties and as head of Labor in the past, why should he succeed this time?” he asked. “The public wants a different kind of politics. I know how to bring it, and apparently Amir cannot.”Defeated Labor leadership candidates Isaac Herzog and Erel Margalit announced Friday that they would support Peretz in the race.Herzog and Margalit finished third and fourth, respectively, in Tuesday’s first round of voting. They were both wooed by Gabbay, who visited both at their homes, but decided to endorse Peretz instead.“Sitting on the fence is not an option when matters of essential importance must be decided,” Herzog said after many of his advisers and supporters urged him to remain neutral. “Amir’s combination of experience on security, diplomatic and socioeconomic issues tipped the balance for me.Experience is important for leadership, and Amir’s advantage was clear.”Herzog said he did not receive anything in return other than commitments to maintain the Zionist Union, the partnership with MK Tzipi Livni, and efforts to build a larger political bloc ahead of the next election.MKs Ayelet Nahmias-Verbin and Manuel Trajtenberg, who supported Herzog in the first round of voting, also backed Peretz.At a hastily called Tel Aviv press conference, Margalit said he decided to endorse Peretz because he connected to him on socioeconomic, security and national issues.“What Netanyahu has destroyed, we will build back together,” Margalit said.Both Margalit and Peretz emphasized at the press conference how little they have in common but said they could complement each other well. Peretz said they would restore hope for people who have given up on the possibility of achieving peace.“My experience and his innovation together can serve the people and State of Israel and help bring down the government of Netanyahu,” Peretz said.During the campaign, Margalit called Peretz corrupt and said he should quit politics, due to irregularities in his party membership drive, and Peretz repeatedly mocked Herzog’s idea of building a Center-Left bloc.Gabbay received endorsements on Friday from MKs Stav Shaffir, Eitan Cabel, Miki Rosenthal and MK Zouheir Bahloul, who heads the party’s Arab sector. Rosenthal supported MK Omer Bar-Lev in the first round of voting.“In his short time in politics, Gabbay has proven his uniqueness,” Bahloul said. “He is not scared of making difficult decisions, he has a backbone of values, and he is a doer. I believe in his ability to work together with me to connect Labor to the Arab sector and build young Arab leadership in the party.”Former MKs Ophir Paz-Pines, Michael Bar-Zohar and Ami Ayalon also endorsed Gabbay on Friday.“Avi is a good man who gives us real hope of stopping the 40 years of right-wing rule,” Cabel said. “I think that with Avi, for the first time in years, we can persuade new sectors to believe in us and support our path.”Eytan Halon contributed to this report.