Rather than indicating a somewhat petty excuse for infidelity, the findings actually reflect growing sense of dissatisfaction in many marriages. 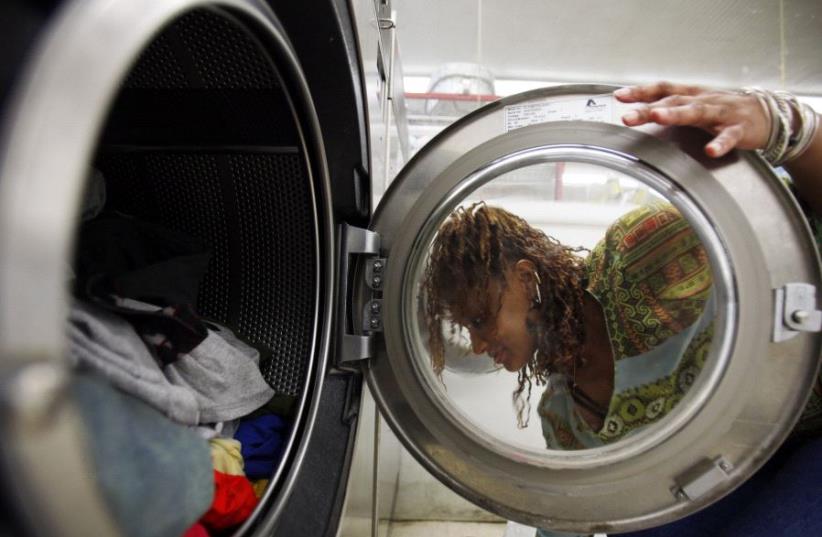 A woman loads laundry into the washing machine at a laundromat in Cambridge, Massachusetts July 8, 2009.
(photo credit: REUTERS/BRIAN SNYDER)
Advertisement
The leading cause for Israeli women looking to have extramarital affairs online is a lack of support with household chores, according to a new study by extramarital affair dating site Gleeden.Women in general are signing up for Gleeden in greater numbers due to the coronavirus lockdown forcing them to live with their partners 24/7. In fact, one October study by the site found a 250% increase in Israeli women signing up for the site since the coronavirus pandemic started, with 41% looking to "break free from their 24/7 cohabitation with their husbands."But rather than simply due to the lockdown, a new study found the real source of unhappiness and longing for extramarital romance comes from a lack of support in household chores.The study found that a majority (57%) of Israeli women have taken to the website to look for an affair due to being upset of their husbands' lack of participation in household chores.Many studies have shown that despite widespread efforts to boost gender equality in all aspects of life, women on average spend at least 74 minutes more on housework than men do. In addition, they also only have around 2 hours and 45 minutes of downtime daily, while men have on average at least 3 hours and 20 minutes each day.But rather than indicating a somewhat petty excuse for infidelity, the findings actually reflect a growing sense of dissatisfaction in many marriages. In fact, 84% of respondents have already fought with their husbands about exactly this, which only further contributes to general dissatisfaction over feeling unsupported.Having surveyed over a thousand Israeli women on their site, Gleeden discovered that the lack of help their husbands seem to contribute to household chores is at the root of overall unhappiness in their marriages. This, explained Sybil Shiddell, Israel country manager for Gleeden, is due to how society has traditionally assigned housework as being for women, and how failure to keep up with this housework can make a woman feel like a failure to society's expectations."Cleaning, cooking, doing laundry, running errands, and taking care of the children are still considered to be women’s responsibility, who eventually find themselves submerged by chores with little or no time to spare on themselves," Shiddell said in a statement."However, society has that if a woman can’t successfully carry out all these tasks, she cannot be properly considered a good wife, nor by her husband, nor his family nor herself. This belief ends up taking a huge toll on her, who juggles trying to do everything to big detriment of her self-care and well-being.”This is compounded by anther factor, that men who don't help around the house are seen as slackers, and that many women find lazy men less attractive. In fact, nearly a quarter (22%) of respondents said they want affairs because their lazy husbands are no longer attractive for them.This ties in with a 2015 study conducted by the University of Alberta in Canada, which found that men who are seen as more active and helpful around the house are also seen as more attractive, and thus are more likely to enjoy a happy sex life with their partners.