Netanyahu on Twitter: Israel would mull an amended Saudi Initiative

The premier took the time on Independence Day to answer questions from social media users. 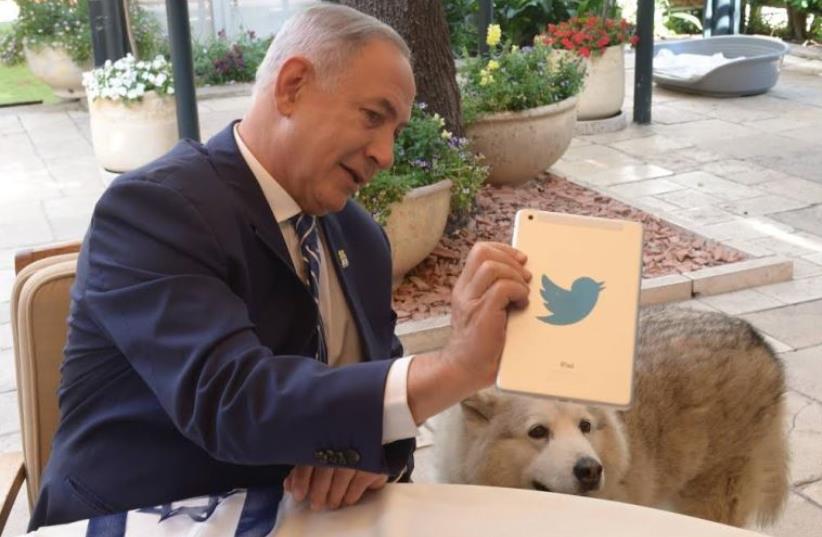 Prime Minister Benjamin Netanyahu answers questions on Twitter
(photo credit: GPO/AMOS BEN GERSHOM)
Advertisement
Israel is ready to talk about an amended Saudi Peace Initiative, Prime Minister Benjamin Netanyahu said on Thursday during a Twitter chat he held in the courtyard of his Jerusalem home in honor of Israel’s 68th Independence Day.One of the questioners asked him in Arabic about the 2002 Saudi Initiative, otherwise known as the Arab Peace Plan, which calls for a two-state solution on the pre-1967 lines with a just settlement for Palestinian refugees. In exchange the Arab world would offer Israel normalized relations.“Why don’t you accept the Arab initiative and what are the reasons why it is not implemented,” Twitter questioner @abosarah7 asked.Netanyahu responded, also in Arabic, that an updated initiative which “addresses our concerns merits further discussion. Israel will always seek peace.”In Arabic, Hebrew and English, the prime minister fielded a number of questions about the two-state solution and the peace process with the Palestinians has been frozen since April 2014.In response to Sam Rubinstein from Brown University, Netanyahu said in a short video response, “I am willing to meet President Abbas today, right now. He can come to my home here in Jerusalem or I can go to his home here in Ramallah. Now I want you to forward that question to President Abbas and see what he says, #askAbbas.”


In a separate response, Netanyahu said, “My vision of peace is clear. Two states for two peoples, a demilitarized Palestinian state that recognizes the Jewish state. It is about time.”On the issue of why increased US military aid was necessary, Netanyahu said, Israel shares vital intelligence with the US."Israel is only real democracy in world’s most volatile region. Grateful for US aid.”Netanyahu has held a live Facebook chat in the past but Thursday’s 90-minute event marked the first time he fielded such questions on Twitter, where the hashtag for the event #askNetanyahu trended. Netanyahu’s office scheduled the Twitter chat earlier this week, drawing the ire of a number of media organizations that used the opportunity to ask the prime minister why he was refusing to grant them interviews.He has not given a sit down interview to the Israeli press since last year’s general election.In the run up to the event, a slew of people on Twitter used the hashtag to troll Netanyahu with questions such as: “What’s it like to be a war criminal? Do the murders of all those women and children make it hard to sleep?” The trolling prompted some to speculate on Twitter that the event was a mistake. Netanyahu made light of that speculation when he responded to one questioner who wanted to know if he would fire the person who came up with the idea for event. Netanyahu joked that the person responsible was his dog and he was going to give her a treat.


Another person asked, “Do you regret making this hashtag yet?” Netanyahu responded: “Heck no. Enjoying every minute.”The Prime Minister didn’t answer the trolling questions, but he did accept a number of questions about his treatment of Palestinians.“Why has Israel killed more than 2,000 Palestinian children since 2000?” @danielwickham93 asked.Netanyahu responded, “Every child’s death is a tragedy.Sadly, Palestinian terrorists hide behind children and fire rockets from schools.”In one Arabic question from Oman, he was asked, “When are you going to stop killing Palestinians, besieging them and taking their land, and property?” Netanyahu responded: “I hope that there will be peace, and wars will come to an end.Unfortunately, terrorists are still threatening our citizens that is why we have to protect them.”Netanyahu’s spokesman David Keyes said the prime minister answered 38 of the 41,218 questions sent to him in Hebrew, Arabic and English.Some of the questions were tough while others were funny.He added that he believed the event was a success. It was an opportunity for Netanyahu “to spread the truth and combat the lies about Israel using powerful medium and technologies.”But a few of the questioners used the event to seek favors from Netanyahu.Tzvi Zucker asked if there were “any positions available in your office for a talented and hardworking American oleh with some chutzpah?” Netanyahu said, “Immigrants contribute greatly to Israel. Send CV.”Australia’s ambassador to Israel, Dave Sharma, asked Netanyahu if he would visit his country again. “You got it! I love Australia. Been there twice.Thrice would be nice!,” wrote back Netanyahu.Al Jazeera correspondent Mehdi Hassan asked Netanyahu if he would agree to be interviewed by his network. Netanyahu said, “I hope one day you’ll invite me to your headquarters in Qatar.”Netanyahu also fielded a number of tongue in cheek questions, including about his own job performance. (Netanyahu currently is prime minister, foreign minister and economy minister.) “Do you worry that your Foreign Minister isn’t fully committed to his job? We don’t hear much from him on diplomatic strategy,” asked one person on Twitter.Netanyahu responded, “I speak to the foreign minister every day. We see eye to eye on everything.”To the question of Edward Said or Bernard Lewis, he said to Heather K. Hughes, “You can do better than that, #What went wrong with your question.”Shahar Goldfinger, who Tweets under the handle “TheguyfromTV” asked Netanyahu “Kirk or Picard? Netanyahu responded, “Spock is themes logical answer.”The prime minister ended with, “Thank you Twitter, this was more fun than I thought. Same time tomorrow?”
Advertisement
Subscribe for our daily newsletter