Fuad ‘never missed a memorial ceremony for a fallen soldier.’ 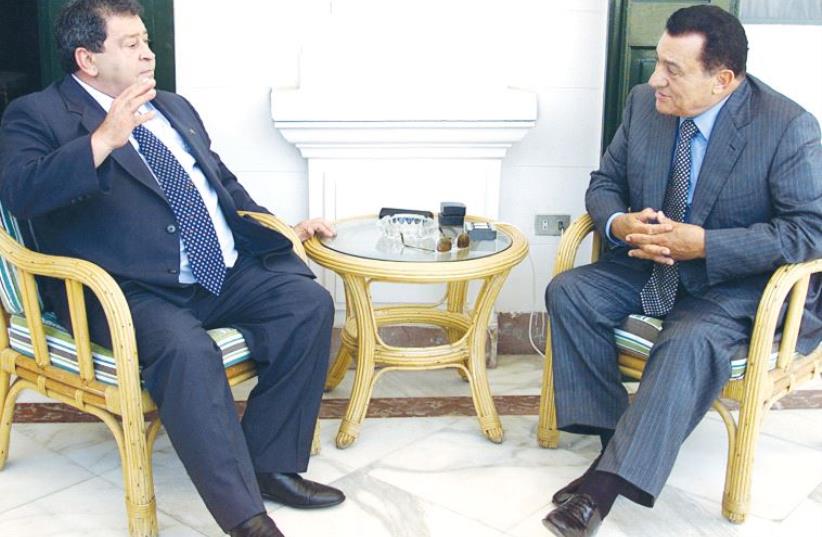 EGYPTIAN PRESIDENT Hosni Mubarak (right) listens to Labor Party head and defense minister Binyamin Ben-Eliezer during their meeting in Alexandria in July 2002.
(photo credit: REUTERS)
Advertisement
Two former IDF officers who fought alongside the late Binyamin “Fuad” Ben-Eliezer in numerous battles recounted a warm and caring commander, who “did not know the meaning of the word distance” when it came to subordinates, and even as a busy defense minister, never missed a memorial event for a fallen soldier from his unit.Lt.-Col. (res.) Shlomi Groner, head of the Shaked Commando Unit Association, joined the elite Sayeret Shaked reconnaissance battalion in 1967, shortly after the Six Day War. He recalled arriving at the unit as “a scared cadet,” fresh out of training, just as Ben-Eliezer took command of the battalion, replacing mythical former commander and Beduin-Israeli Amos Yarkoni.As he rose through the ranks, he formed a special bond with Ben-Eliezer, Groner said. “Even though he was a commander, and I only became an officer later, we were very close.”Sayeret Shaked was formed in 1956 to counter terrorist infiltrations from the southern borders. Although it was disbanded in the 1980s, the group first became an organized military unit under Ben-Eliezer’s command, Groner said.“He drew up training programs and missions and convinced Southern Command to expand its jurisdiction, to cover the Suez Canal, Gaza and the Jordan Valley, where we dealt with terrorist intrusions,” Groner said.“He commanded the unit during its most difficult time, the War of Attrition, a long conflict with many casualties. It was a very difficult war. Ariel Sharon was then OC Southern Command, and he was very happy that this unit existed.”The unit sustained many casualties in its battles against terrorists, and Ben-Eliezer “was a very determined commander during its most difficult time,” Groner said. During down time, Ben-Eliezer sat with his soldiers around the fire, eating and “drinking coffee with us and the Beduin trackers.”During times of danger, he led soldiers into “all of our battles,” Groner said. “He had the ability to mix charisma with a wide-ranging strategic view.”“He saw Sayeret Shaked as the peak of his military career, even though he went on to command bigger units. Shaked was always close to his heart,” Groner said.“He was deeply tied to the unit’s fallen members and their families. He had an unusual visual memory and remembered each and every casualty and their relatives. He supported and hugged the bereaved, and even during his toughest, most stressful political roles, like defense minister, he did not miss a single memorial ceremony.”Ben-Eliezer got up on stage at each ceremony with tears in his eyes and remembered the fallen, he added. “I can’t compare him to anyone else. He always hugged and helped. There was no precedent for this.”Brig.-Gen. (res.) Amazia Chen joined Sayeret Shaked in 1962 as a conscript, and later became an officer and a reservist in the unit. He met Ben-Eliezer for the first time at the end of May 1967, when he was called up as a reservist along with the general IDF call-up ahead of the Six Day War.Ben-Eliezer was Sayeret Shaked’s deputy commander at that time.Chen installed .03 caliber machine guns on six-wheeled vehicles before the war broke out.“Fuad led the operations and activated the battalion, which was attached to the 8th [Armored] Division in Sinai. These forces stopped the 10th Egyptian Division,” Chen said.After defeating the Egyptian forces, Ben-Eliezer was ordered to take his battalion and engage a Palestinian commando unit that had been hiding in sand dunes near El-Arish in the Sinai, from which they ambushed the IDF. He completed the mission as ordered, Chen said.Following the war, in December 1967, Fuad asked Chen to remain as a career officer, which he did.“A day later, on January 1, 1968, we were at the Jordan Valley, and Fuad arrived with a plan” to stop a wave of Palestinian terrorist attacks from Jordan, Chen said. The unit conducted operations south of the Dead Sea, killing 65 Jordanian soldiers and Fatah members without sustaining any casualties of its own. Ben-Eliezer’s plan included monitoring roads on which the unit would encounter terrorists who crossed the border from Jordan.Later, Chen recalled, Ben-Eliezer was wounded in a counter-terrorism operation, when his helicopter came under Jordanian fire near Petra.Across a huge area, stretching from the Suez Canal to the Jordan Valley, Ben-Eliezer’s battalion conducted “dozens, if not hundreds of operations, and I was there under his command.Usually we completed the operations with no casualties,” he said.Chen last spoke with Ben-Eliezer by phone on Thursday, three days before he died at the age of 80.“I talked to Fuad every week,” Chen said. “He was a good person. I loved him.”