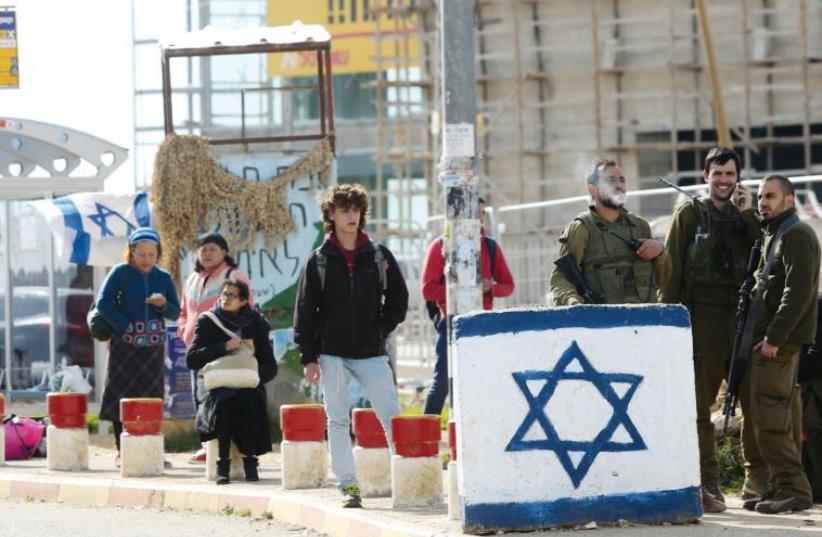 IDF soldiers patrol the Gush Etzion Junction in the West Bank, in January
(photo credit: MARC ISRAEL SELLEM)
Advertisement
The IDF announced Wednesday that it had resolved a multi-day standoff with a 15-year-old right-wing activist who had been defying a ban against him being in the West Bank where his parents live.Although earlier Wednesday, the right-wing NGO Honeinu said that he would remain in his parents house, having nowhere else to go, the IDF said that a living space had been found for him in the South during the six months that he is banned from the West Bank.Previously the IDF had said that the minor is suspected of violence against Palestinians and public disturbances against the IDF.The minor received on May 31 administrative restraining orders to stay out of Judea and Samaria for six months and break contact with various other activists from IDF Central Command.A security source added that there are multiple indictments pending against the minor for actions which harm state security in the West Bank.Earlier Monday, the right-wing NGO Honeinu put out a statement from the minor’s father saying, “my son has nowhere to go. He lives here, his family lives here…The consequences of expelling a minor from his house are unconscionable. Who will take responsibility? Who will take care of the boy?” Originally, the minor was supposed to live on a temporary basis with his grandparents in Petah Tikvah, including under limits from going out at night.However, Honeinu said that the intense conditions of being under quasi-house arrest and regular visits by police made it so that the Petah Tikvah option could not continue.Also on Wednesday, Honeinu successfully enlisted the Council for the Wellbeing of Children to appeal to the IDF to alter its treatment of the minor.In a letter to the IDF, the Council wrote that it was well aware that the fact of being a minor did not grant impunity to violate the law. However, at the same time, the Council said "we do not pursue the purposes of preserving the law and public order using any and all means" and that the IDF should be exercising more thoughtful discretion about the impact its measures are having on the minor.The IDF responded Wednesday to the letter that "security authorities act with the purpose of balancing the minor's needs with security needs which emanate from the threat which he poses to the security" of the state. It added he was represented by a lawyer at all stages.Although the IDF has been issuing more restraining orders to right-wing activists to stay out of the West Bank in recent years, and especially following last July’s Duma Jewish terror attack, it is still rare for them to be issued against minors.The IDF explained late Monday that the restraining orders were issued after it received “classified, concrete and well-grounded information that the minor was involved in recent months in violent actions against Palestinians residents near Yitzhar and participated in disturbances against security forces.”It added that the minor has also egged-on other minors to break the law and take part in activities which endanger state security.Further, the IDF said that the minor had had several chances to stay in his parents’ house provided he did not move around to other West Bank areas.However, when he continued to violate these conditions, the IDF was left no choice but to restrain him from being in the West Ban area entirely.