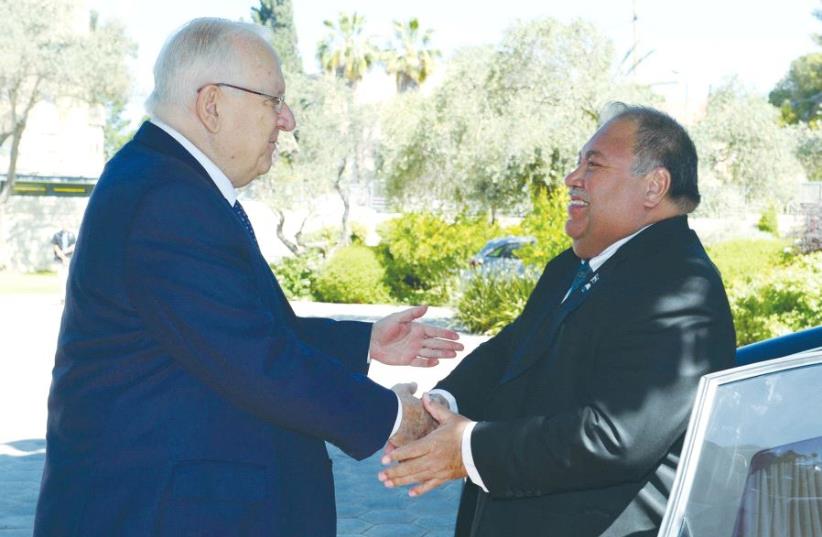 NAURU’S PRESIDENT Baron Waqa assures President Reuven Rivlin
(photo credit: MARC NEYMAN/GPO)
Advertisement
platitudes that are part and parcel of formal interchanges between the leadership of Israel and visiting foreign dignitaries, expressions such as “our closest ally” or “one of our most loyal friends” will frequently escape the lips of the president or the prime minister.Such epithets can usually be taken with a grain of salt, except when it comes to the smallest island states in the South Pacific.When President Reuven Rivlin welcomed Nauru’s 14th President Baron Waqa and his delegation on Sunday, he was absolutely sincere in all the compliments he heaped on Nauru, because Nauru is Israel’s most unconditional and uncritical friend, invariably voting for and with Israel in every public forum in which they are both members – including the United Nations.Waqa noted the presence of Ambassador Marlene Moses, Nauru’s permanent representative at the United Nations, saying: “She doesn’t have to take instructions from us on how to vote at the UN. She knows – and she always supports Israel.”Referencing Israel’s bid for a seat on the UN Security Council in 2019, Waqa assured Rivlin that Israel never has to lobby Nauru on this or any other issue. “We have already given our support,” he said, adding that such support would continue for as long as Nauru continues to exist.“We came a long way via New York, but were eager to come to show solidarity with Israel and its people.”Commenting on the fact that his country is “a speck in the vast ocean” of the Pacific, Nauru’s president said that it covers an area of only 21 sq.km. and has “a humble population of 10,000 who are all loyal and strong supporters of Israel.”Waqa suggested that it was in Israel’s best interests to get closer to all the nations of the Pacific, which he said are like one family. He pledged that Nauru would work to bring the other islands of the Pacific closer to Israel.He was also grateful, for Israel’s medical help, in cooperation with Australian and New Zealand medical teams, in getting rid of Nauru’s diabetes problem. He also thanked Israel for its technology which had helped Nauru to purify its water.The Nauru delegation came to Israel from New York, where the UN Ocean Conference had taken place, discussing the rising sea levels, which in some parts of the world are threatening to engulf land masses. From Israel the delegation will proceed to Bonn, Germany, for another ocean conference.Many of the populations in the Pacific islands are devout Christians, who know their Bible very well. Rivlin said that when he was in Micronesia some years ago, he was impressed by the fact that the children knew their Old Testament better than Israeli children.Waqa said that like ancient Israel, Nauru has 12 tribes, and this is reflected in the 12-pointed white star in Nauru’s flag. “But we lost 10,” said Rivlin, to which Waqa replied that there is a legend in his country that its people are descended from the Lost Tribes of Israel.The presidential visit from Nauru gave rise to hope that Rivlin will be visiting Australia within the next 12 months.Next year, Israel will celebrate its 70th anniversary, said Waqa, but even before that, on January 31, Nauru will celebrate its 50th anniversary of independence. Waqa invited Rivlin to join in his country’s jubilee festivities and to also attend a meeting of the Pacific Island Forum that includes all the leaders of the Pacific.Rivlin said that he would be pleased to do so on his way to Australia.He said that Israel was proud to have helped Nauru in the past and would always be willing to share its knowledge and technology with it.