Out of thousands of hours at sea, 60% was spent in operations, navy chief says 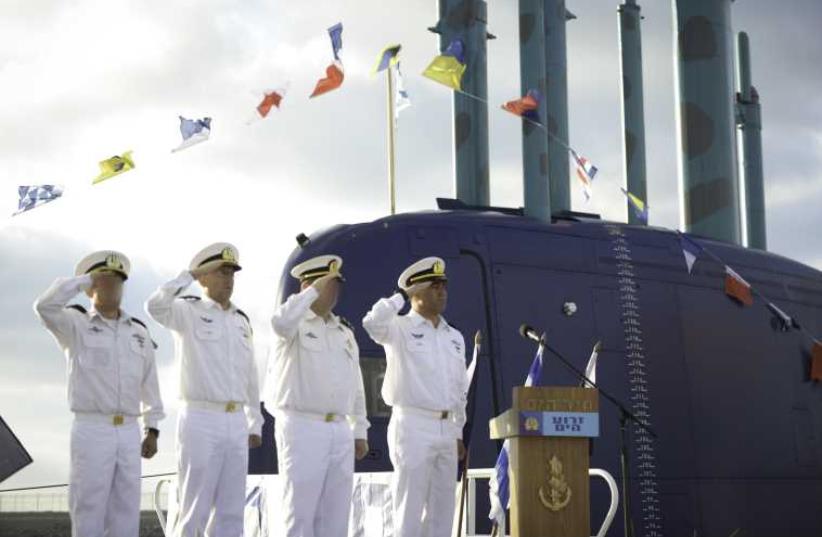 Navy receives new submarine flotilla commander‏.
(photo credit: IDF SPOKESMAN’S UNIT)
Advertisement
The Israel Navy’s Submarine Flotilla (Shayetet 7) received a new leader this week.The officer, who can only be named as Capt. D., took up the post on Sunday, the navy said on Monday, and replaced Capt. G, who completed a fouryear term as commander of the flotilla.During a ceremony attended by OC Navy V.-Adm. Ram Rothberg and the commander of the Missile Boats Flotilla, Capt. Eyal Harel, senior navy commanders made reference to the large number of covert operations submarines carried out in recent years.“Dozens of missions, hundreds of hours at sea in sensitive enemy areas. There is no sector that you did not penetrate, no challenge that you did not overcome. You conducted unique operational cooperation that were breakthroughs with the Missile Boats Flotilla and the naval commandos,” Rothberg said.“You created an operational culture, and a new combat cooperation in the branch, and you succeeded,” he continued.“The results of your actions were a fixed feature on the desk of the IDF General Staff, and enabled in many cases for brave and decisive decision making, with you being at the forefront, the core. You are the ones they trust.”The outgoing Submarine Flotilla commander said that recently, out of thousands of hours at sea, more than 60 percent were spent in operations.The flotilla today has six crews and two models of the Dolphin-class submarine, he said, citing a “new basis that is being built” in the form of new-generation Dolphin Air-Independent Propulsion (AIP) subs. The navy ordered three AIP-enabled new generation Dolphin-2’s from Germany.The INS Tanin arrived at the Haifa Navy Base in September, and received weapons and communications systems from domestic defense companies.The fifth Dolphin-class vessel (and third Dolphin-2), the INS Rahav, expected to arrive in the coming months. The submarines work closely with other navy ships, naval commandos, the IAF and infantry units.“The variety of missions they carry out is getting wider,” Capt. G. said. “The secret of the success is in the quality of the people and their special spirit, which units us all.”The incoming commander, Capt. D, who until now headed a department in the IDF General Staff’s Operations Branch, said he first served in submarines 21 years ago.“I got here as a lieutenant after years of service in the Missile Boats Flotilla, and I came here in light of my understanding of the importance of submarines in attaining victory at sea,” he said. “Today, a very different Submarine Flotilla exists than the one I came to, different in its size and power, and also in its technological and operational complexity, and its large contribution to state security.”In late March, a senior Israel Navy source said advanced weaponry, much of it supplied by Iran, is flowing into Syria and Lebanon. The navy is spending a large share of its operational time dealing with smuggling of advanced weapons, according to the source, who added, “Such weapons pose a challenge to all Western navies in the area.”He said the northern front has become unified, and that Lebanon and Syria can no longer be viewed as separate entities.