Netanyahu praises US for backing Israel's stance on Hamas 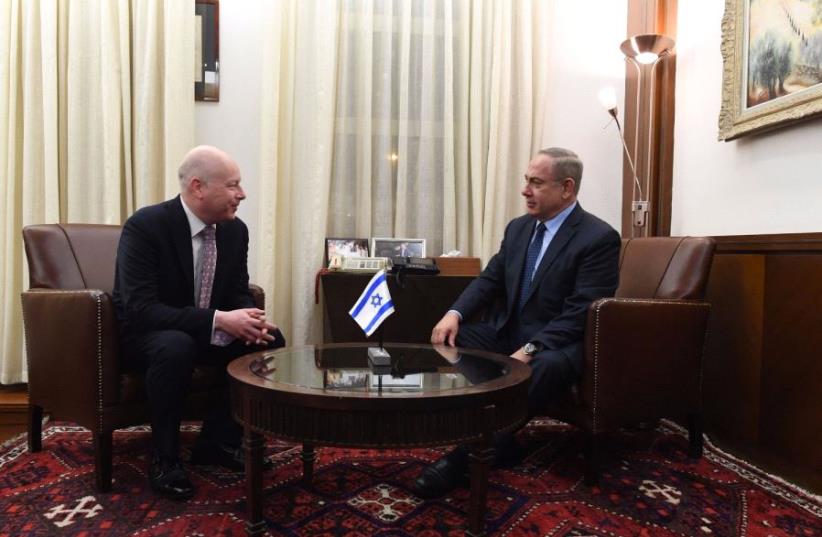 Netanyahu, Greenblatt
(photo credit: KOBI GIDEON/GPO)
Advertisement
Prime Minister Benjamin Netanyahu commended the US on Thursday for making clear that Hamas must disarm, recognize Israel and accept previous agreements."I would like to commend the statement by the American administration in Washington,” Netanyahu said of a statement put out Thursday morning by Jason Greenblatt, President Donald Trump's special representative for international negotiations, regarding the recent Fatah-Hamas reconciliation agreement.Greenblatt's statement read: “All parties agree that it is essential that the Palestinian Authority be able to assume full, genuine, and unhindered civil and security responsibilities in Gaza and that we work together to improve the humanitarian situation for Palestinians living there.”The United States, it continued, “reiterates the importance of adherence to the Quartet principles: any Palestinian government must unambiguously and explicitly commit to nonviolence, recognize the State of Israel, accept previous agreements and obligations between the parties – including to disarm terrorists – and commit to peaceful negotiations. If Hamas is to play any role in a Palestinian government, it must accept these basic requirements.”Netanyahu said he was “pleased” that Greenblatt made those principles clear.“We want peace; we want a genuine peace and because of this, we will not conduct negotiations with a terrorist organization in diplomatic disguise," Netanyahu said.Greenblatt, meanwhile, traveled from Israel to Egypt on Thursday to discuss the Palestinian reconciliation efforts with Cairo, which played a large role in brokering the deal.“The United States is closely monitoring the reconciliation efforts and is in frequent contact with Egypt, the Palestinian Authority and Israel,” the White House said in a statement announcing the visit. “Special Representative for International Negotiations Jason Greenblatt has traveled to Egypt to meet with senior officials about the status of reconciliation. He will also work with the Government of Egypt on the basic principles outlined in his earlier statement today so we can help facilitate an enduring peace between the Israelis and the Palestinians.”Greenblatt's statement came two days after the security cabinet met and announced that Israel “will not conduct diplomatic negotiations with a Palestinian government that relies on Hamas” unless it recognizes Israel and stops terrorist activities, in accordance with Quartet principles established more than a decade ago.In addition, the statement said Hamas must be disarmed, the bodies of Israeli soldiers and the Israeli citizens held by Hamas must be returned, and the Palestinian Authority must assume full security control over the Gaza Strip – including at the border crossings, where it must prevent the smuggling of arms into the coastal strip.Other conditions set by the security cabinet for continued negotiations with the PA are that it continue to thwart Hamas terrorist activity and the building of terrorist infrastructure in the West Bank, that Hamas be cut off from Iran, and that funds and humanitarian supplies will flow into Gaza only through the PA and other internationally recognized mechanisms set up for this purpose.