Earlier this week, police said that they had arrested two Palestinian men for allegedly raping and urinating on a mentally disabled woman in south Tel Aviv. 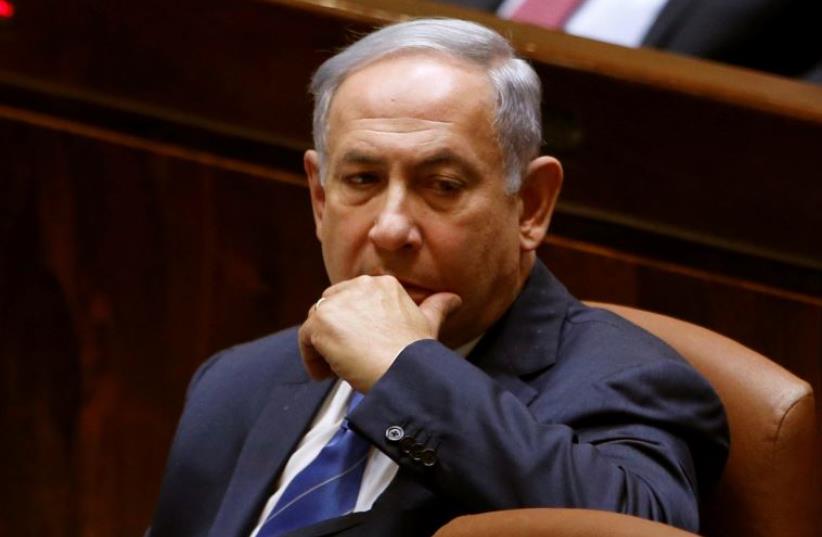 Prime Minister Benjamin Netanyahu at the Knesset
(photo credit: REUTERS)
Advertisement
Prime Minister Benjamin Netanyahu expressed regret on Friday over a Facebook post in which he lashed out at the media and the Left for failing to condemn an alleged rape of a mentally disabled Jewish woman by three Palestinian men.Earlier this week, police said that they had arrested two Palestinian men for allegedly raping and urinating on a mentally disabled woman in south Tel Aviv in what police say was a nationalistically motivated crime.The incident took place on Independence Day earlier this month, at the 20-year-old victim’s aunt’s apartment.During the act, Imad Aladin Dragame, 42, allegedly filmed the rape, which police say was carried out by two other Palestinians – including a minor – who urinated and spit on the woman while shouting anti-Semitic slurs at her and threatening to murder her aunt and brother if she complained.The news of the arrests and allegations prompted Netanyahu to write an angry Facebook post denouncing the press and the opposition for not loudly condemning the incident.Netanyahu's post elicited harsh reaction from Zionist Union and Meretz lawmakers who accused the premier of failing to speak up on behalf of rape victims prior to the alleged incident."This is a shocking crime that demands condemnation from wall to wall, but such a condemnation has not been heard for some reason – not in the press and not throughout the political spectrum," the premier wrote. "One can only imagine what would happen if [Jews were alleged to have gang raped a Palestinian woman]. We will exact justice from all of the participants in this cruel act."On Friday, however, Netanyahu retracted his statement."With regards to the post that I wrote last night, the incident as was reported on evoked great pain and deep shock," the premier wrote. "Nonetheless, it was not proper of me to comment on a matter before it was investigated upon, and I regret this."Channel 10 reported on Friday that the real impetus behind Netanyahu's retraction was a lack of evidence that has become increasingly apparent during the course of the police investigation."The case is weak from an evidence standpoint, particularly in light of pictures and video clips found on the cell phones of the suspects which indicate a sexual relationship between the suspects and the young woman that had been ongoing for quite some time," Channel 10 quotes a police source as saying.While police sources say that the investigation is continuing, legal analysts believe that prosecutors will not have enough evidence to indict the men currently in custody.Police and the government were also criticized for waiting over a week before announcing the arrests in the case.MK Michal Rozin (Meretz) asked Public Security Minister Gilad Erdan to clarify earlier this week why police waited to alert the public about a gang rape in south Tel Aviv, saying doing so may have helped a fugitive suspect evade arrest.“At the same time that one of the suspects is on the run, police prevented the publication of the case. It’s possible that this decision has prevented the police from catching the third suspect,” Rozin wrote in a letter sent to Erdan’s office Wednesday.Hiding stories like this “seriously harms the process cases like this deserve,” she said, and asked whether this was a case of neglect.Rozin also stated that the delay was more glaring because the victim had issued her complaint on May 12, the day after the assault, which contradicts a statement made during a remand hearing for one of the suspects on May 17 in which the police officer present said the complaint was first issued on May 16 by the victim’s aunt.The case involves brutal allegations of a gang rape by three Palestinians from the West Bank who reside in Israel, including a minor. One of the suspects – a 42-year-old father of three from Nablus – is suspected of filming the rape, which was allegedly carried out while the suspects spit and urinated on the 20-yearold mentally disabled woman and made anti-Semitic comments, leading police to assert the case involves nationalist motives.All three were residing in the same apartment building as the victim, her aunt and her aunt’s boyfriend. The third suspect remains at large.Tel Aviv police issued a statement on the case only on Wednesday after they were grilled by crime reporters in a closed WhatsApp group about why they had failed to inform the public about the case, even though three remand extensions had already been held.