Adv. Mariam Kabaha previously served as the regional commissioner for equal employment opportunities in Haifa and the North. 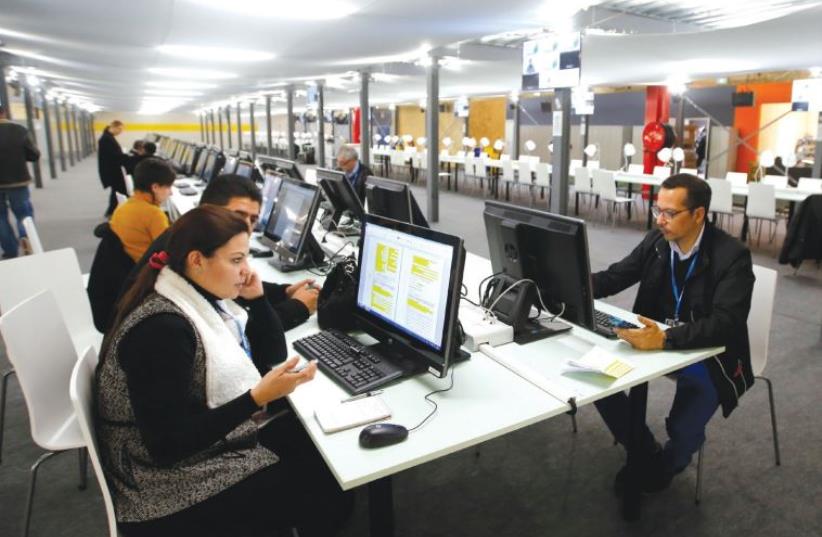 JOURNALISTS AT work at their desks.
(photo credit: REUTERS)
Advertisement
The government unanimously approved on Sunday the appointment of Adv. Mariam Kabaha to serve as National Commissioner for Equal Employment Opportunities in the Economy Ministry.“This appointment has symbolic and practical importance. We have two major tasks in the field of employment – to increase the employment of Arab women and ultra-Orthodox men,” said Prime Minister Benjamin Netanyahu.“The appointment serves the achievement of a national objective. Mariam Kabaha is talented, worthy and I wish her success.”Kabaha previously served as the regional commissioner for equal employment opportunities in Haifa and the North.Among her recent achievements of note, she founded the Forum for Advancing Equality at Work in the Arab Sector, which aims to increase awareness among the Arab population of their rights; provides access to the available tools to help them; and increases enforcement in the field of equal employment.The groundbreaking forum, which began its activities in January 2015, marks the first time that government bodies and NGOs involved in the field have joined forces in one working group with a common goal.The committee for the selection of a new national commissioner, headed by Amit Lang, director-general of the Economy Ministry, submitted its recommendation to the prime minister last month.The committee, comprised of Lang and Ilan Ram, representative of the Civil Service Commission; Adv. Amy Palmer, director-general of the Justice Ministry; Prof. Guy Mundlak, representative of academia; and Nurit Tzur, representative of the public – reviewed 59 applicants before unanimously recommending Kabaha.She replaces Adv. Tziona Koenig- Yair, who established the Equal Employment Opportunities Commission in 2008 and served as its first commissioner.The commission was established with the goal of eradicating discrimination in the labor market. Within this framework, the EEOC deals with 16 grounds of discrimination, including race, sexual orientation, religion, age, military reserve duty, pregnancy, fertility treatments, ethnicity and political views.The EEOC has held five annual conferences; dealt with 5,267 complaints; managed 68 legal proceedings; given more than 700 lectures; created and executed two strategic programs; and will soon publish – for the first time ever – a booklet of recommended practices for workforce diversity based on the experiences of employers in Israel.