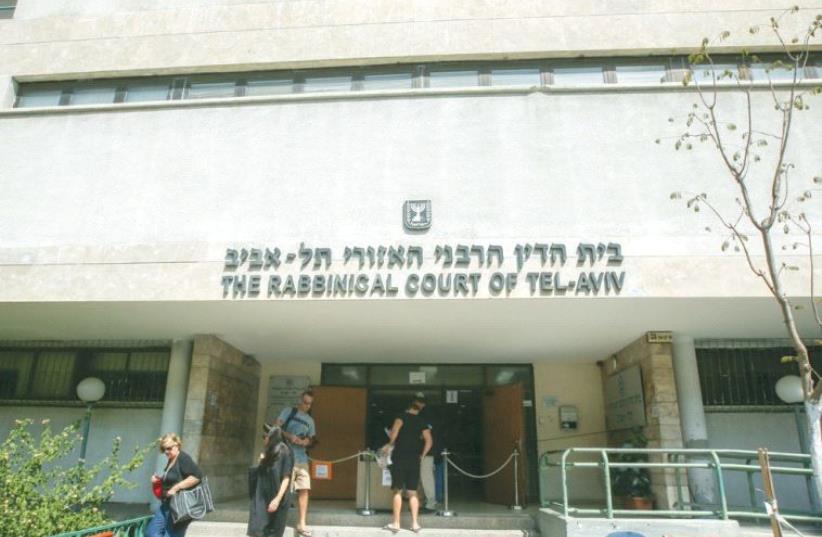 THE RABBINICAL COURT of Tel Aviv
(photo credit: MARC ISRAEL SELLEM/THE JERUSALEM POST)
Advertisement
The new rabbinical courts advocate selected to join the rabbinical judges appointments committee is virtually unknown to the leading women’s rights organizations, a fact that has caused concern that the choice was made due to political considerations.Religious Services Minister David Azoulai of Shas appointed attorney Rachel Dotan to the position several weeks ago, although this has only come to light in recent days.Several women’s rights groups and advocates have now expressed concern that the new appointee will weaken the liberal voice on the critical appointments committee, although a senior official in the Religious Services Ministry said that Dotan would be completely independent and objective.The membership of a female rabbinical courts advocate on the appointments committee originated in legislation, passed in 2013, designed to give women a voice on the panel, which had hitherto been comprised of men alone.It stipulated that at least four out of the 11 committee members be women, given that four men, the two chief rabbis and two Supreme Rabbinical Court judges are automatically guaranteed places on the panel.After the legislation was approved, then justice minister Tzipi Livni appointed Dr. Rachel Levmore, an expert and authority on Jewish marriage and divorce law, to the position after consulting with the leading women’s rights organizations.In the last 12 months, Levmore, together with Justice Minister Ayelet Shaked, Zionist Union MK Revital Swid and Israel Bar Association representative Efrat Rosenblatt were able as a bloc to significantly influence the recent appointments of 33 rabbinical judges to the regional rabbinical courts and the Supreme Rabbinical Court.In order to reassert haredi influence over the committee, Shas inserted a clause into its coalition agreement with the Likud after the 2015 elections, stipulating that the religious services minister, not the justice minister, appoint the rabbinical court advocate to the panel.In appointing Dotan, Azoulai did not consult with any of the central women’s rights organizations The Jerusalem Post has learned.Neither were the other members of the appointments committee directly informed of the selection, and were made aware of Dotan’s appointment only in a letter issued by committee chairman and Infrastructure Minister Yuval Steinitz.None of the major women’s rights groups contacted by the Post said that they were familiar with Dotan.A senior official in the Religious Services Ministry who wished to remain anonymous told the Post that the minister had looked for a candidate for the position “who is totally objective and who is not involved in politics or has political connections.” The official added that finding a candidate without “political connections” had been difficult.“We didn’t find many [female] rabbinical court advocates like Rachel Dotan. Most were connected with one organization or another,” said the official.He insisted that Dotan has no political connections to the Shas Party or any other political group, and also noted that once appointed there is no way to remove her from the committee.“She has a great deal of experience, she knows the system well and her only agenda is the good of the rabbinical courts and who will be a good judge.”However, one very well placed source, who also wished to comment anonymously, told the Post they believed Dotan would comply with demands made by Shas and its senior leadership regarding possible appointees.A senior official in one of the leading women’s rights groups, who wished to comment off-record, said that as far as they could discern, Dotan did not have extensive experience in family law litigation in the rabbinical courts in recent years.“The law to secure a place for a female rabbinical courts advocate on the committee was a minor step in compensating for the complete lack of voice for women within this totally patriarchal system,” said the official.“We fear that the new appointment could jeopardize the whole aim of the law, and instead of granting women a voice in the appointments process, it could actually strengthen the male political system even more.”The director of the divorce rights organization Mavoi Satum, attorney Batya Kehana Dror, said that she hopes Dotan would be able to overcome political pressure when making appointments.“The entry of women to the rabbinical judges appointments committee is an important guarantee to the selection of fitting rabbinical judges who will act with justice and equality towards women,” said Kehana Dror.“I hope that the new appointee, which was entirely the choice of the Shas party, will be justified and that attorney Rachel Dotan will be able to show independence, determination, and personal integrity when selecting rabbinical judges, in the face of the various political pressures she will have to deal with.”Dotan declined an interview request for this article.According to the director of the Rabbinical Courts administration, Rabbi Shimon Yaakobi, between six to nine new rabbinical judges will be appointed in the near future.