‘Next year in Jerusalem’

At Balienjera, the only Ethiopian restaurant in Tel Aviv, customers are served authentic cuisine – with a side of the Zionist dream 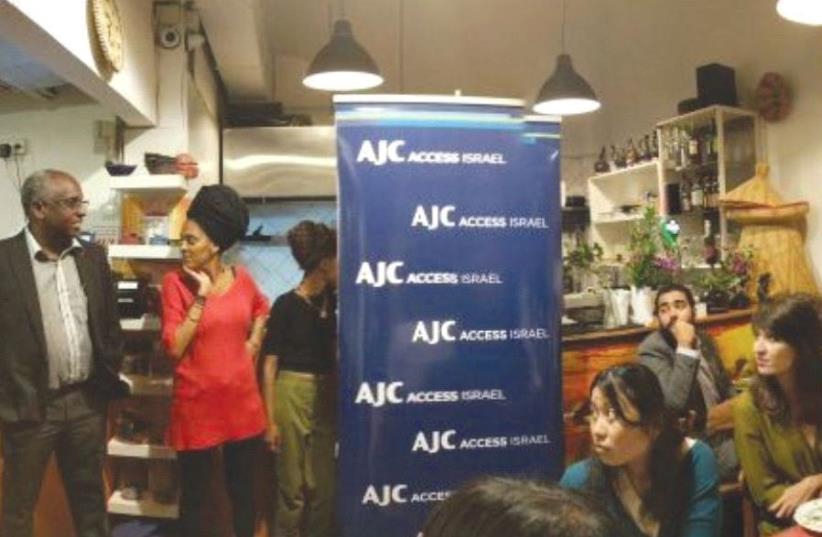 Balienjera restaurant hosts a delegation of diplomats for an event sponsored by the American Jewish Committee
(photo credit: THE AMERICAN JEWISH COMMITTEE)
Advertisement
Balienjera, a small, unassuming restaurant tucked into the alleyways of Tel Aviv’s Kerem Hateimanim neighborhood, mirrors the story of its owner, Fanta Prada: It is the product of hard work and an earnestness to show the uniqueness of the Ethiopian people and culture.Prada immigrated during Operation Solomon in 1991 – a swift, covert operation that airlifted more than 14,000 Ethiopian Jews to Israel in 36 hours. Although coming to Israel had always been a dream for her and her family, the trajectory from being a struggling immigrant to enjoying a successful career as a model, lawyer and now restaurateur was not easy.Earlier this month, Balienjera hosted a delegation of diplomats for an event sponsored by the American Jewish Committee. The evening’s purpose was to better acquaint the diplomats with Ethiopian culture and have them see that Israel is a lot more diverse than meets the eye.“Israeli society is fascinating in the sense that it has a lot of colors, cultures and religions, all interacting simultaneously,” Avital Leibovich, director of the AJC’s Jerusalem office and a retired IDF lieutenant-colonel, said after the dinner. “By exposing the foreign diplomats to the Ethiopian-Israeli community, we share domestic challenges and ways of resolving them, which we are proud of.”As a child, Prada lived in a Netivot absorption center with six brothers. Overcoming the vast cultural gaps was difficult. By opening her restaurant in Tel Aviv, Prada hoped that more Israelis would become acquainted not only with Ethiopian food, but with Ethiopian-Israelis and their culture.“We hope this will help combat preconceived notions about the culture. We opened near Shuk Hacarmel [the Carmel Market] so it would be accessible to a wide array of people,” she tells The Jerusalem Post by phone.Her niece, Ashager Araro, who attended the AJC dinner, marvels at Prada’s story and believes it represents not only the story of Ethiopian Jews, but Israel itself.“This is a story of entrepreneurship. We’re a hard-working people,” she told the diplomats.“She is a woman who came when she was very young to Israel,” she went on, referring to Prada. “She did not know the language. She finished her law degree and opened a successful business. This is something her parents would never have imagined possible. I think this is a story of Israel.”When Araro’s own family arrived in Israel, her grandmother got on her knees and kissed the ground on behalf of ancestors who had yearned to be Israel and would say “next year in Jerusalem.”“Our story is not unique,” Araro, who works for the pro-Israel NGO StandWithUs, told the diplomats. “In every house in Israel, everyone has a similar story – they ran away from antisemitism and looked for a safe place. This is what unites us as a country.”While the diplomats broke bread – or injera – with each other, they learned that while Ethiopian-Israelis regard coming to Israel as a miracle, it is a life not without its struggles.Fentauhun Assefa-Dawit, executive director of Tebeka, an NGO established in 2000 to protect the rights of Israel’s approximately 150,000 Ethiopian olim, was also on hand to explain that while much progress has been made regarding equality, there’s still much to be done.“People dreamed and the dream came true,” Assefa-Dawit told the diplomats. “They wanted Israel, Jerusalem, Zion, the freedom to be Jewish without being called names. But every immigration has its challenges.”Tabeka has a robust legal department with five full-time lawyers, two retired judges and 10 to 15 lawyers working as volunteers to help the olim overcome bureaucratic obstacles.“We fight discrimination, but also work with the system so that Israel will be a just, tolerant and equal society,” Assefa-Dawit explained.As such, Tebeka campaigned for body cameras for policemen (an initiative approved in August as a pilot program by the Israel Police and Public Security Minister Gilad Erdan), the establishment of cultural awareness courses at the police academy, and a campaign encouraging more Ethiopians to join the force.For her part, Prada is upbeat.“I’m a very optimistic person,” she tells the Post. “I think we’re making progress, but people need to be more educated. People aren’t born racist – they just need to be exposed to different cultures.”