The organization is calling on the public to contact them if they know of a survivor in need. 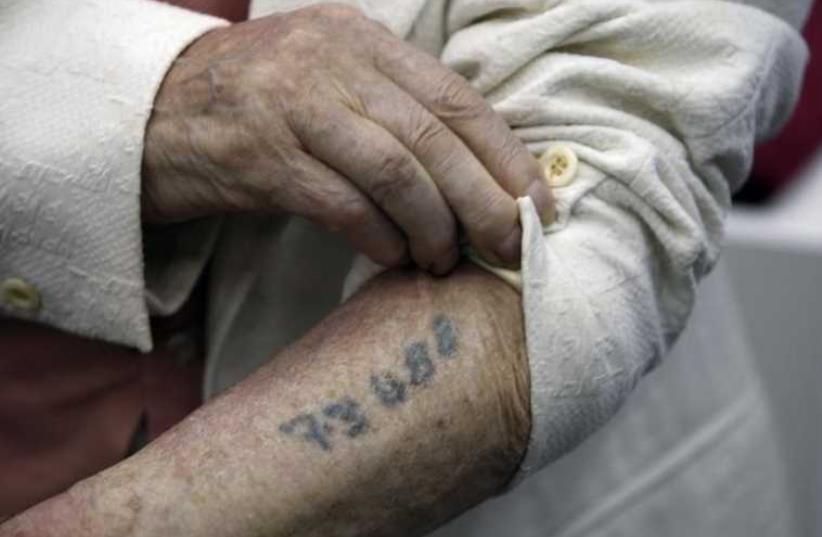 A Holocaust survivor shows his prisoner number tattooed on his arm, Yad Vashem, Jerusalem
(photo credit: REUTERS)
Advertisement
Many impoverished Holocaust survivors cannot afford air conditioning units and suffer in the scorching summer heat. For the elderly, especially those suffering from illness, the high temperatures can be dangerous to their health and well-being.The Association for Immediate Help for Holocaust Survivors launched an urgent campaign this week to install air-conditioners in the homes of Holocaust survivors throughout the country.“The forecast is that this will be one of the hottest summers ever,” organization director Tamara More told The Jerusalem Post on Tuesday.“We had a severe heat wave this week and we are really scared that elderly people will die. There is not that much awareness of the dangers of heat to the elderly in Israel and there is no government initiative to install air conditioners for the elderly, so we decided to launch this project,” she explained.Currently, there are some 45,000 survivors living below the poverty line in Israel, More said. She estimated that most of them do not have air conditioning or they have a very old unit which may not work well.“Our organization takes care of around 3,000 Holocaust survivors and we have already installed air conditioners for the vast majority of them,” she said.The organization, comprised only of volunteers, assists survivors in every aspect of their lives – from driving them to hospitals, to preparing food according to their dietary needs, from legal counsel to emotional support, as well as helping to renovate their homes.As such, the nonprofit has rallied to assist them ahead of the hot summer months, collecting old air conditioning units as well as purchasing new ones and installing them with the help of six companies throughout the country that are volunteering their time and installers to the cause.More explained that there is roughly a month left to install air conditioners for many needy Holocaust survivors ahead of the busy summer months when installers are too swamped with requests to volunteer.“So now we are calling on the public at large: Whoever knows of a survivor in need, please don’t hesitate to contact us,” she said.She added: “We are taking care of 3,000 survivors but the authorities do not share with us information about additional needy survivors even though they don’t assist them in this respect and so we really need the public’s help.”More said the organization is also looking for donations of new and used air conditioning units that are no more than five years old as well as monetary donations of any amount to help purchase new units.According to More, the association does not receive any government funding, or even financial support from other organizations that receive compensation funds from Germany.Due to a lack of funding for the initiative, the operation will be limited to Holocaust survivors who are alone in the world and who live below the poverty line.“Mainly we are calling on Holocaust survivors who are alone and in need and we are calling people who know survivors, maybe a neighbor, to let us know or tell them of the initiative and see if they are interested,” she said.In addition, she said the organization is looking for further volunteers who have time to assist mainly in the organization’s offices.“We really hope that people will respond to the desperate need to install these air conditioners and donate toward this goal, as this is indeed a life-or-death issue,” she said.Holocaust survivors who need help as well as the general public interested in making donations or volunteering can call the association’s hotline in English: 03-525-7888 or contact them via email at [email protected]