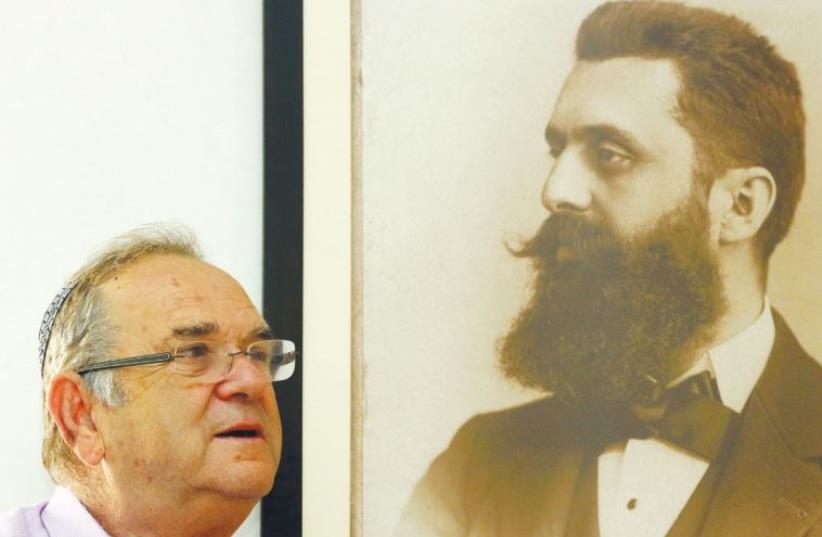 WORLD ZIONIST ORGANIZATION head Avraham Duvdevani speaks in his office
(photo credit: MARC ISRAEL SELLEM/THE JERUSALEM POST)
Advertisement
While Zionism is still very much alive, it needs to become “more relevant to what’s happening now,” according to Avraham Duvdevani, the chairman of the World Zionist Organization.Sitting in his Jerusalem office opposite a huge portrait of modern Zionism’s founder, Theodor Herzl, Duvdevani pounds his desk as he proclaims, in Hebrew, “We have to create a boom to get into the consciousness of Israelis and Jews everywhere that Zionism still exists. It’s alive, breathing and kicking, active and important. This is a message especially relevant to a generation that thinks the word ‘Zionism’ is a joke.”Duvdevani, who at 70 is at the peak of a stellar career in Zionist institutions, talk to The Jerusalem Post ahead of the 37th World Zionist Congress in Jerusalem from October 20 to 22.Duvdevani is credited with resurrecting a moribund organization after being cajoled into taking the top job in the WZO five years ago.“When I took over the WZO, with the money of the Jewish Agency, we had an annual budget of $13 million. We expanded the budget to $32m., almost $20m. more.Where does the money come from? First of all, the government gives us a lot of money, as well as Keren Kayemeth LeIsrael-Jewish National Fund, depending on the issue at hand.”Duvdevani outlines several examples of the wide range of projects in which the WZO is engaged: encouraging immigration to Israel in the Diaspora through Zionist education and aliya programs, monitoring and combating anti-Semitism around the world, funding Israeli teachers to teach Hebrew at Jewish schools abroad and nurturing a new generation of Zionist leaders.He still sees the WZO’s main challenge as promoting aliya.“Our job is to make sure there are Jews in the Diaspora who can be brought on aliya.Our job is to go to the homes of these Jews, knock on their doors, and say, ‘Moshele, come home! Your home is not here. Your home is in Israel. Here in London or New York, you have an address. Maybe you’re having the time of your life here. But it’s an address. It’s a hotel. Maybe it’s five stars, but it’s a hotel. Your home is in the Land of Israel.’ That’s the Zionism we’re talking about.”The WZO’s biggest weakness, according to Duvdevani, is its lack of funding for public relations to get the word out about its many accomplishments.“Our main problem is that most people don’t know what we’re doing, because we don’t have a budget for PR. I would like to be able to invest in a public relations department to tell the whole Jewish world about what we’re doing.“At the very least, people should know that we have a Zionist Congress. In 1950, after the establishment of the state, the whole country followed the daily goings-on at the congress, which took place over 10 days. It was a national event. During our last congress, there wasn’t a word in any newspaper about it. There were 2,000 delegates from all over the world and it lasted three days, but there wasn’t a mention in the media. I wasn’t involved then, but now that I am involved, I said to myself, ‘This time, the whole country will know there is a congress.’” This is an excerpt from an article published in a special magazine published by The Jerusalem Post and the WZO which is available in the latest issue of The Jerusalem Post.