Once again: garbage in the streets of Jerusalem

Garbage is piling up in the Holy City, and everyone is pointing fingers. 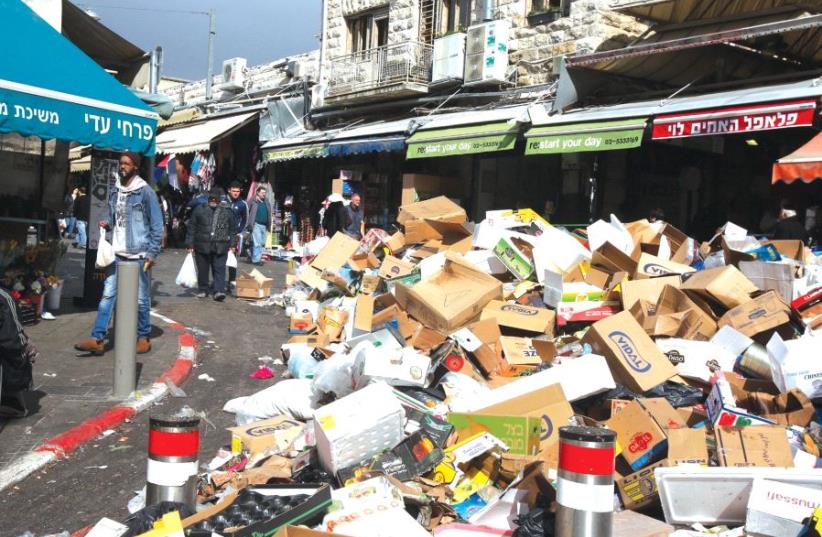 A ‘garbage mountain’ at the Mahaneh Yehuda shuk, a result of the municipal strike in January 2017.
(photo credit: MARC ISRAEL SELLEM)
Advertisement
A group of Jerusalem Municipality workers protested budget agreements that they say have not been fulfilled by staging a demonstration in front of the Finance Ministry on Sunday morning. The workers spread large quantities of garbage at the entrance to the ministry and blocked adjacent streets in the capital for several hours.
Demonstrators placed signs attacking Finance Minister Moshe Kahlon, such as “Kahlon gave up Jerusalem,” on the piles of garbage. Media reports said the water supply to the ministry was temporarily blocked by the demonstrators and that Finance Ministry Director-General Shai Babad had filed a complaint with the Israel Police against the protesters.
This comes amid a struggle between the municipality and the ministry, or as some would say, between Jerusalem Mayor Nir Barkat and Kahlon.
On Thursday, Barkat sent a letter to Prime Minister Benjamin Netanyahu and cabinet ministers said the Finance Ministry was reneging on its commitment to provide agreed-upon budgeted funds to the capital.
Barkat said the move “is crossing a red line and an unprecedented breach of a ministerial agreement.” He added that if the funds are not transferred to the municipality, he will have to carry out cutbacks, including firing workers, freezing support to welfare NGOs and making wide-scale cuts to the budgets of local community administrations.
Later on Sunday, the municipality filed a petition with the High Court of Justice against the Finance Ministry. It claims the ministry unilaterally decided not to transfer NIS 105m. it had previously committed to deliver to the municipality.
After filing the petition, Barkat said: “The finance minister is bluntly running over the law... not following cabinet decisions and consciously and deliberately harming Jerusalem. I will not let political vengeance harm the residents of Jerusalem.”
This is the third consecutive year in which sanitation workers have protested the Treasury in the name of the municipality. Last year, garbage was piled up for days in the streets of Jerusalem.
Mayoral candidate and Jerusalem municipal opposition leader Ofer Berkovitch (Hitorarut) blamed Barkat for dragging the city into his personal issues with Kahlon.
“Once again Barkat is throwing the residents of Jerusalem into a personal and political battle,” he said. “Once again the garbage is piled on our streets, and the cleaning workers are littering the roads instead of cleaning them.”
“In recent years the special ‘capital grant’ [by the Finance Ministry] grew larger, and we demand that it will grow even bigger,” Berkovitch said. “But today it is clearer than ever that Nir [Barkat] is a burden to the city and its residents. Nir is the problem and not the solution.”
The Finance Ministry responded to Barkat’s letter by saying the special grant to Jerusalem doubled during Kahlon’s tenure and reached an all-time high.
“During the period of minister Kahlon, Jerusalem was given a special grant in an unprecedented sum of more than NIS 3 million,” the ministry said. “Moreover, Kahlon lowered corporate tax in Jerusalem to 7.5% to attract companies and factories to the city while encouraging government companies to move to the city.”
“Jerusalem is above any dispute, and the Finance Ministry will keep strengthening it and its residents just as it did until now,” it added.