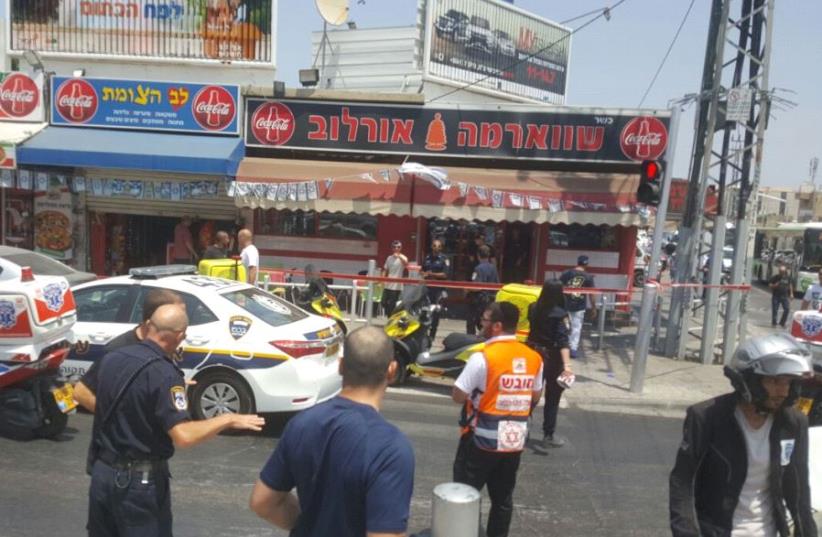 Scene of stabbing attack in Petah Tikva
(photo credit: ALON HACHMON)
Advertisement
A Palestinian man was indicted for attempted murder on Wednesday for a stabbing attack in Petah Tikva last month that left one man wounded.According to the indictment, Mansour Khatib, 21, from Kalkilya entered Israel illegally on July 24 with a knife, with the intention to carry out a stabbing attack against civilians. Once he arrived in Petah Tikva he stabbed the victim in the neck several times, leaving him seriously wounded.
Police arrest terrorist from Petah Tikva stabbing (credit: FACEBOOK)
Thinking he had killed his victim, Khatib fled on foot but was eventually stopped by a pizzeria worker, Shlomi Madar, who hit him with a large wooden pizza tray.The victim, an Egged bus driver from the Israeli- Arab town of Ara, was stabbed by Khatib in front of a downtown shwarma stand after apparently being mistaken for a Jew.According to the Shin Bet (Israel Security Agency), Khatib was imprisoned in 2015-2016 for unspecified terrorist activity.The military prosecutor has requested that Khatib’s detention be extended until the end of the proceedings.The attack came during a two-week period of Arab violence due to tensions surrounding the Temple Mount.“I did it for al-Aksa,” Khatib said after the attack.Shlomi Madar, the owner of a pizza restaurant who subdued the terrorist in Petah Tikva. (Alon Hachmon)">

Following a shooting attack by three Israeli Arabs from Umm el-Fahm, who killed three police officers at the capital’s Lions’ Gate on July 14, using weapons that had been smuggled onto the adjacent Temple Mount, authorities installed metal detectors at the entrances to the Mount, leading to days of Palestinian rioting.Clashes with security forces during the crisis left several Palestinians dead, and a 19-year-old Palestinian who infiltrated the Halamish settlement on July 21 stabbed to death three members of a family in their home.The metal detectors were subsequently removed.