“We expect the High Court to make sure that where the fence is designed to dispossess Palestinians, rather than protect security, it will be dismantled”. 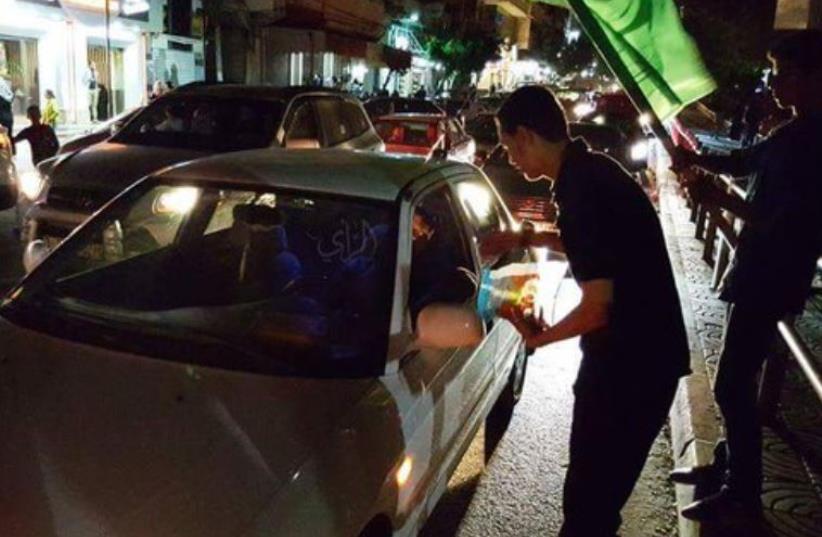 Youth in Tulkarm distributing candies
(photo credit: ARAB MEDIA)
Advertisement
Palestinians have petitioned the High Court of Justice to reroute six kilometers of the security barrier on grounds that it has caused disproportionate harm to farmers who were separated from their land by it.“After 102 petitions warning of future harm to Palestinians as a result of the fence, this is the first petition to address proven harm to Palestinian life in the years since the construction of the fence,” left-wing Israeli NGO HaMoked: Center for the Defense of Individuals told the media.It has filed a petition to the court on the matter on behalf of seven Palestinians from three West Bank villages in the Tulkarm area: Kaffin, Nazlat Isa and Akkabah. The NGO is represented before the court by attorneys Michael Sfard and Haya Abu Warda.“This petition is the inevitable result of 15 years of experience with the military’s seam-zone permit regime,” HaMoked executive director Jessica Montell said. “Rather than facilitating access, as the military promised, this cumbersome bureaucracy serves to dispossess entire Palestinian communities of their land, stripping people of their livelihoods and their sources of income, without even the pretense of a security justification.”“We expect the High Court to make sure that where the fence is designed to dispossess Palestinians, rather than protect security, it will be dismantled,” she said.The six km. of the barrier are located in Area C of the West Bank, which is under Israeli military and civilian control.
This territory likely would not be part of the area Israel plans to annex, Montell said.Since the completion of the barrier in 2005, the military has reduced the number of crossing permits, kept animals from grazing there and stopped the farmers from bringing equipment, pesticides and fertilizers onto the land, HaMoked said.There has been a 90% reduction in income as yield has dropped, orchards have dried up, and some of the land has lain fallow, it said.Initially pledges were made to the farmers that they would be given adequate access to their agricultural lands to enable them to farm the crops without harm, it added.But the prohibitions and red tape involved have effectively disposed the farmers of their land, a situation that has worsened over the years, HaMoked said.In 2014, the IDF approved 3,221 seam-zone permits, amounting to 75% of those requested. In 2018, the IDF issued 1,876 permits, representing 26% of the requests.Kaffin residents were given 1,800-2,000 permits annually between 2012 and 2014, HaMoked said. The number has dropped 85% to 350 a year. Akkabah residents received an average of 165-189 until 2014, it said. The number has dropped to 65, it added.“Recently, denials have also been related to agricultural reasons instead of just security rationals,” it said.“Ultimately, the clear result... is a drastic reduction of Palestinian presence and farming in the area, a reduction in the types of crops that can be grown in the seam zone, incurable harm to soil fertility and the crushing of farmers whose lives depended on their lands,” HaMoked said in its petition.“The concrete walls and barbed-wire fences that make up the separation fence shatter and trample every single one of the petitioners’ basic rights and the rights of members of their community: The rights to a livelihood, freedom of movement, family life, participation in cultural and social life, equality, dignity,” the petition says.