The PA minister was detained by police officers from his home in the east Jerusalem neighborhood of al-Suwaneh, near the Mount of Olives. 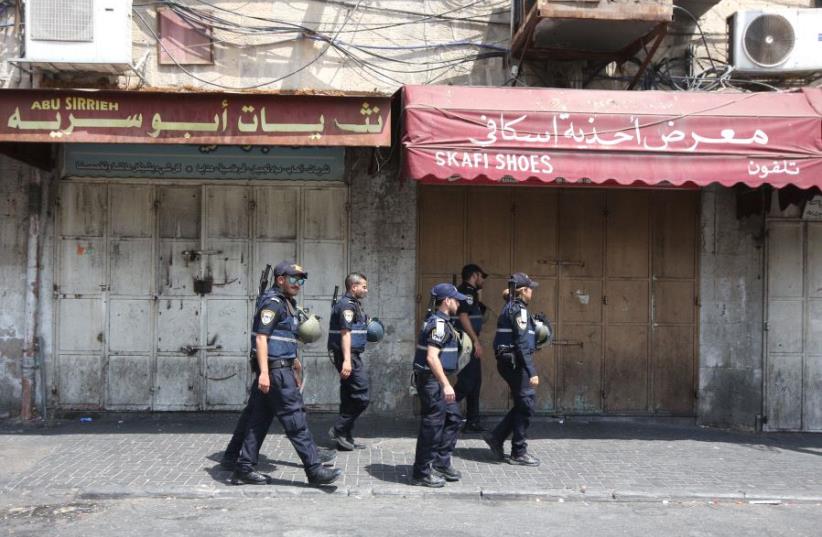 Police patrol Sultan Sulivan Road, Jerusalem, as security forces brace for disorder, July 21, 2017.
(photo credit: MARC ISRAEL SELLEM)
Advertisement
Palestinian Authority Jerusalem Affairs Minister Fadi al-Hidmi was detained for questioning on Sunday by police.His lawyer, Ahmed Safiyeh, said Hidmi was released six hours later. The lawyer said Hidmi was questioned about his activities in east Jerusalem, including various services he provides to the residents there.He described the detention as “politically-motivated,” claiming it came in the context of Israeli measures against east Jerusalem and its residents.This was the third time Hidmi had been detained since he was appointed minister in the PA government last April. He has also been summoned for interrogation several times by the police in the past few months.The minister was detained by police officers from his home in the east Jerusalem neighborhood of al-Suwaneh, near the Mount of Olives.Hidmi, a resident of east Jerusalem, holds an Israeli-issued ID card that grants him the status of permanent residency in Israel. He previously served as general-director of the east Jerusalem Chamber of Commerce.His detention comes in the context of the Israeli authorities’ efforts to prevent the PA from carrying out various activities in Jerusalem.The authorities suspect that Hidmi has been acting in violation of the 1994 Law for the Implementation of the Agreement on the Gaza Strip and Jericho Area, which prohibits the PA from carrying out political, governmental or similar activity within the area of the State of Israel, including east Jerusalem.The law states that the PA “shall not open or operate a representative mission, and shall not hold a meeting, in the area of the State of Israel unless written permission for this has been given by the State of Israel or someone authorized by it to do so.”In mid-October, Hidmi was detained by the police for several hours, apparently to prevent him from accompanying representatives of the Saudi Football Federation during a visit to al-Aqsa Mosque in the Old City of Jerusalem. In July, he was briefly detained by the police after accompanying Chilean President Sebastian Piñera to the holy site.Jerusalem police officers have in recent months detained the PA “governor” of Jerusalem, Adnan Gheith, also on suspicion of carrying out governmental and political activities in the city.