“Go out and tour our beautiful, developing country during Hol Hamoed,” the prime minister encouraged Israelis. 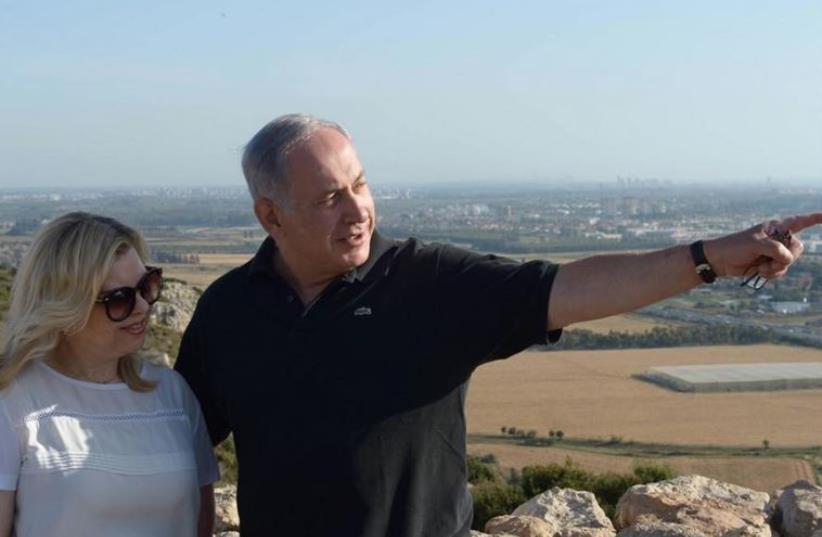 Prime Minister Benjamin Netanyahu and his wife, Sara, during a Passover excursion in northern Israel
(photo credit: AMOS BEN-GERSHOM/GPO)
Advertisement
MKs took advantage of the Passover break to tour the country with their families this week.Prime Minister Benjamin Netanyahu, his wife, Sara, and their oldest son, Yair, went to Zichron Ya’acov, where they visited Beit Aharonson – the Nili Museum, which tells the story of the first Jewish underground in pre-state Israel, which provided the British Army intelligence in its fight against the Ottoman Army in World War I.At the museum, Netanyahu was presented with letters his father, Ben-Zion Netanyahu, wrote to Alexander Aaronsohn, one of the founders of Nili and brother of the better- known founders Aaron and Sarah Aaronsohn.“They talked about the future of Zionism and the storm coming over the world with the rise of the Nazis, as well as the documentation of the Nili Underground, in which my father took part as a historian,” Netanyahu described the letters, adding that he was moved to receive them.The Netanyahu family also visited nearby Ramat Hanadiv, a garden in memory of Baron Edmond de Rothschild.“Go out and tour our beautiful, developing country during Hol Hamoed,” the prime minister encouraged Israelis.Meanwhile, Education Minister Naftali Bennett took a hands-on approach to seeing the country, posting to social media photos of himself hiking the Judean Desert with two of his children on his back.In a video that he posted online, Bennett swam in Wadi Rahaf, near the Dead Sea, recommended the trail to families with children, and joked: “There are some places without traffic jams.”Opposition leader Isaac Herzog’s office kept mum about his holiday plans, but he tweeted a picture of a beach, which he described as “under the sky by the Mediterranean Sea, here in the center of the country.”Some lawmakers took a multicultural approach, with MK Rachel Azaria tweeting a photo from a Beduin tent, where she said her family slept after a trip to the North, and MK Yossi Yonah took part in a meeting between Jewish and Arab Israelis, as well as Palestinians, where a band played Kurdish- Jewish songs in Arabic.Others spent the time volunteering, like MK Oren Hazan, who took part in a fund-raiser in Otniel in Judea for victims of terrorism, and MK Meir Cohen who, on the day before Passover, packed food for the needy.Some politicians chose to vacation abroad.Public Security Minister Gilad Erdan was spotted in Greece, at the same hotel as comedian and columnist Hanoch Daum.MK Shelly Yacimovich tweeted a photo of her cat climbing into her suitcase ahead of a trip abroad.