Analysis: Netanyahu waiting for Obama's successor in a gamble on Israel's security

The prime minister has asked for $5 billion in annual defense aid and says that he will wait to sign the new Memorandum of Understanding with Obama's successor if the US president doesn't agree. 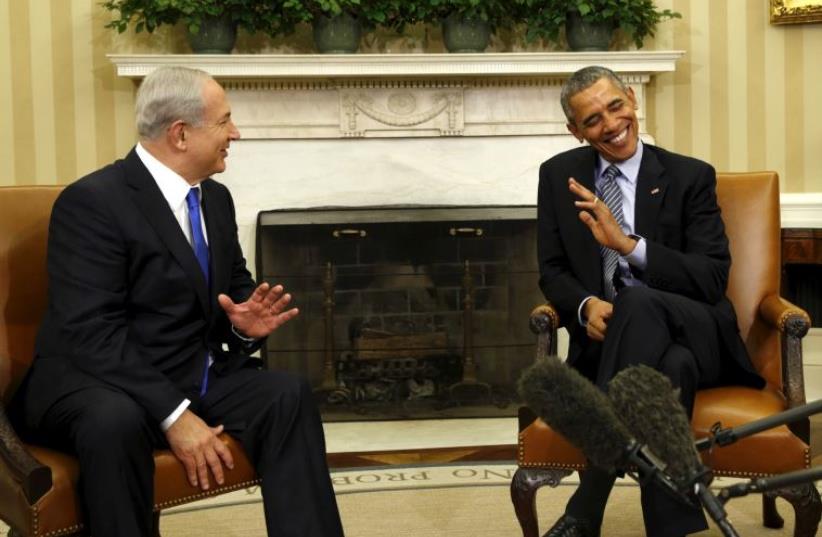 Prime Minister Benjamin Netanyahu shares a joke with US President Barack Obama during their meeting in the Oval office of the White House, in Washington
(photo credit: REUTERS)
Advertisement
If more proof was needed about the nature of Prime Minister Benjamin Netanyahu's behavior toward the administration of US President Barack Obama, it was given during Sunday's cabinet meeting. Netanyahu said that if Israel does not get what it wants in negotiations with the Obama administration on the new US defense aid package, then it will postpone signing the agreement until a new president enters the White House in January 2017, in an attempt to achieve better conditions.Despite Netanyahu's attempts to thwart the nuclear agreement between Iran and the six world powers, an unprecedented effort in the annals of international diplomacy that included intervention in internal US affairs, the Obama administration agreed to swallow the insult and discuss a defense aid compensation package for Israel. Negotiations between the two sides were launched during which Israel requested to raise annual military aid from $3 billion (Israel actually received an additional $400 million annually in recent years for development of anti-missile systems) to $5 billion. Israel wants the increased US aid in order to purchase additional advanced fighter planes, refueling planes, to develop its anti-missile systems and to develop new intel equipment, cyber technologies and advanced tanks.Netanyahu's threat came on this background. But it is the threat of a gunslinger that is out of bullets. The prime minister must have confused the two sides. The truth is that the United States is doing Israel a favor by agreeing to discuss enlarging defense aid, when they are still in the middle of a ten-year agreement, which does not expire until 2018.Even if we assume that Netanyahu is a seasoned negotiator driving a hard bargain, what can he actually achieve? If a Republican candidate is elected, then Netanyahu's gamble could pay off. There is no doubt that a Republican president, especially one that received campaign contributions from Sheldon Adelson, will be more open to fulfilling Netanyahu's requests. However, if Obama's successor is a Democrat, the chances of increasing financial aid are not great. If Bernie Sanders wins, defense aid will definitely not increase, and could even possibly decrease. If Hillary Clinton wins, the aid could grow, but certainly not to the $5 billion annually that Israel is requesting.In any case, it will be at least a year-and-a-half until that happens. This is valuable time which should not be wasted. Beggars can't be choosers. If Netanyahu's comments are only a bargaining tactic that will in the end bring an economic achievement to Israel during Obama's remaining tenure, we can praise him and say that because of his obsession with the Iranian nuclear program, he learned a lesson in the art of negotiation from the Grand Bazaar in Tehran. However, if the prime minister waits a year in the hope for an advantageous change of administration in Washington, it is clear that this leader is either a gambler or the security of Israel is not that important to him.