Clinton's consistency on Israel over the course of her lifelong career in public service is at the heart of Lieberman's pitch to voters. 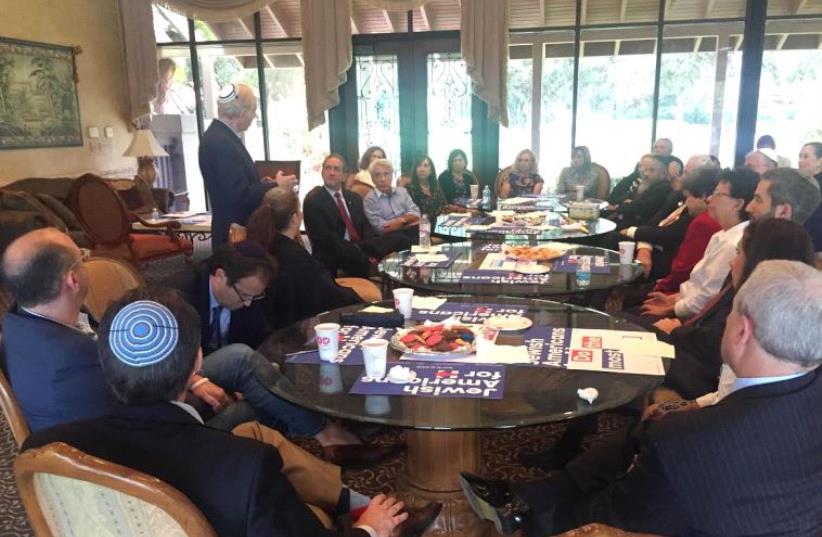 FORMER SENATOR Joe Lieberman speaks to voters at a synagogue in Boca Raton yesterday.
(photo credit: HILLARY FOR AMERICA)
Advertisement
NEW YORK -- Hillary Clinton dispatched to Florida one of her most effective surrogates to Jewish voters on Thursday, hoping to shore up support within a community that has repeatedly proven crucial to Democratic victories there.A political independent who leans heavily to the left, socially liberal and muscular on foreign policy, former Connecticut Senator Joe Lieberman tracks closely with the Democratic presidential nominee on a host of issues– and with many Jewish Floridians still on the fence just seventeen days before the general election.Addressing a temple in Boca Raton, a shul in Miami and a group of rabbi and community leaders, Lieberman emphasized that Clinton is precisely the type of candidate the Jewish community has been waiting for."On Israel and on matters of interest to the Jewish community– on general matters of open and tolerant societies, on civil rights and the like– she's had a very strong and consistent Jewish and pro-Israel record," Lieberman said in a phone interview. "He does not," Lieberman added, of her Republican rival, Donald Trump. "So its very hard to predict what he's going to do."Clinton's consistency on Israel over the course of her lifelong career in public service is at the heart of Lieberman's pitch to voters, some of whom remain skeptical of her, according to the former senator, in large part due to her experience within the Obama administration.They fear she will be an extension of an eight-year experience that has been turbulent for those who care deeply about America's relationship with the Jewish state. And yet they are fearful of a Trump presidency, given his willingness to disregard of decades-old alliances without much reasoning or warning, Lieberman explained.The majority of Jewish Americans reliably vote Democratic, and most of Florida's Jewish voters cast their ballots for Barack Obama– both in 2012 against former Massachusetts Governor Mitt Romney, and in 2008 against Arizona Senator John McCain, whom Lieberman endorsed. But Obama's support among Florida Jews dropped 9 points in the interim, and polls suggest that persuadable voters this year are particularly concerned with the administration's handling of relations with Israel."One of the things holding them up from deciding is their displeasure with some of the things President Obama has done," said Lieberman, who said he has been speaking with Jewish community leadership around the country over the past year. Lieberman was skeptical of the Iran nuclear deal, and told the audience at one of his events that Clinton had the credibility to enforce the agreement from a position of strength. "Hillary Clinton is not President Obama," he added, "and when you look at her record, she would come to the White House with an extraordinary record of support for Israel and very good ongoing relations with Israeli leadership across the political spectrum."Compare that to a man who has no experience in foreign policy whatsoever, Lieberman said."In addition to the increasing confidence that Hillary Clinton is not Barack Obama, I think that people in the Jewish community have watched the Trump campaign essentially marginalize itself with his positions on things like immigration, with comments that seem to divide people and make people worry about whether he'd have any capacity to unite the country and lead it," he said. "You know, he criticizes President Obama for sending mixed messages, but honestly, Donald Trump has sent a message to our allies in Europe and Asia that the US is not going to be an ally they can rely on."The Clinton campaign believes that Trump's illiberal tendencies will drive many of these voters– skeptical of the sitting president and willing to vote Republican– to her camp. The question for them is how to drive up turnout amongst Florida's Jews, who tend to be older voters, many of whom require assistance to their local polling stations.Congressman Lois Frankel of Southeast Florida's 21st district attended Lieberman's events on Thursday. He received several questions on Clinton's involvement in brokering an international nuclear deal reached with Iran last year, she said in an interview.Frankel opposed the deal once it reached the House for a vote."There has been a steady and I would say unfair drumbeat by some against President Obama, and I think in large part because of a perception– that could be real– of his relationship with [Prime Minister Benjamin] Netanyahu," said Frankel, who sits on the House Foreign Affairs Committee. "In any event, she's her own person– and he felt very good, and I agreed with him, that she'd be strong for Israel."Polling of the American Jewish community is infrequent, but campaign operatives believe that a late national surge in support for Clinton will directly impact her support within this constituency to her benefit. Polls over the summer that showed her securing roughly 67% of the Jewish vote– precisely what Obama net in 2012–were all conducted before a series of scandals and offensive episodes whittled Trump's support nationwide.Nevertheless, Democrats are not taking their chances in this critical state– which, if Clinton wins, will end Trump's electoral hopes for the presidency. One super PAC, called Jews for Progress, will launch a highly targeted campaign this weekend aimed at Jewish voters who are still undecided, persuadable, "or weakly committed," according to a source familiar with the campaign.Lieberman is featured in the media effort, which will consist of paid ads on social media and auto calls to more than 100,000 unique Jewish households in Florida.Given the extraordinary footprint both candidates have already left on the national consciousness, Lieberman 's first task upon arriving in the Sunshine State on Thursday morning was to figure out who, at this point, could possibly still identify as an undecided voter."It's a good question," Lieberman chuckled.