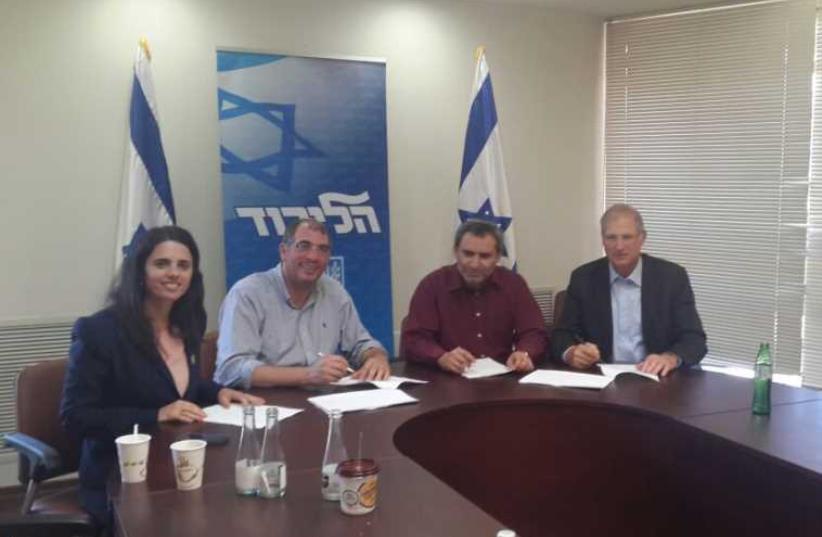 Likud and Bayit Yehudi sign coalition agreement
(photo credit: BAYIT YEHUDI)
Advertisement
Following marathon negotiations all night, the Likud and Bayit Yehudi struck up a deal Wednesday, completing the formation of Prime Minister Benjamin Netanyahu's coalition government a mere hour and a half before deadline.In a statement released Thursday morning, Bayit Yehudi confirmed that the agreement had been signed."Bayit Yehudi received the education and diaspora affairs portfolios for its leader Naftali Bennett, justice minister for MK Ayelet Shaked, agriculture minister for MK Uri Ariel, and the position of deputy defense minister," the statement read.Ayelet Shaked also confirmed the signing of a deal after a sleepless night. "Now, we're off to work," she said in a statement.Likud MK Ze'ev Elkin, who signed the agreement on behalf of his party, congratulated the completion of the coalition formation led by Netanyahu and wished success to its members.Opposition and Zionist Union leader Isaac Herzog reacted to the news on Thursday, reiterating that his party went to the opposition as promised from the beginning. "We don't have to say it every minute on every street corner. I don't have an intention nor did I have to be a fifth wheel of Netanyahu. I intend to replace Netanyahu," he said.Now that the agreement is finalized, the parties have seven days to swear in. They said they are planning to do so by next Wednesday, at which point Netanyahu will tell the Likud MKs who will be a minister and who will not, and portfolios will be decided upon.The Knesset is expected to start passing a bill Monday that would delay the implementation of the law limiting the number of ministers to 18 to the next Knesset. The process of legislating it may only be completed on Wednesday, which is why the swearing in will likely only take place then, on the final day, by law, that it can take place. Gil Hoffman contributed to this report.