Comment: The funeral of Shimon Peres as a snapshot of Jewish history

Before moving to Israel, Peres's grandfather Rabbi Zvi Meltzer hugged him and said, “My child, be a Jew." 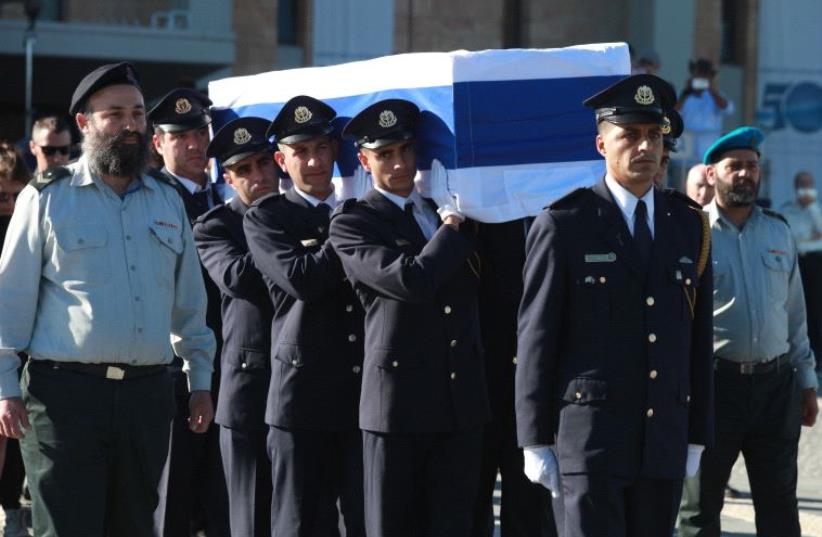 Shimon Peres's funeral.
(photo credit: KNESSET SPOKESMAN'S OFFICE)
Advertisement
In August 1942, Shimon Peres’s grandfather Rabbi Zvi Meltzer was marched by the Nazis along with more than 2,000 Jews of Vishneva into the town’s wooden synagogue, where they were burned alive.Seventy-four years later, the leaders of more than 70 countries – representing well over half of humanity – came to Jerusalem for Peres’s funeral.That, as much as anything, epitomizes the change the State of Israel has brought upon the Jewish people.As Elisha Aviner, the rabbi of my local synagogue, said Saturday morning, kings, princes, presidents and prime ministers dropped everything to pay respects for a little Polish Jew.Put in historical perspective, he said, that is nothing short of a miracle.It is also something that was not lost on Peres himself. On Wednesday, the day Peres died, his daughter Tzvia Walden said that he always saw the wonder, the miraculous, in the State of Israel. It was never lost on him.“He immigrated to Israel as a boy before the Holocaust,” she said. “From nothing, there became a state, which was a miracle in his eyes. And he lived with this sense of the miraculous, and never ceased to be in wonder that we have a state. He never took that for granted, and he never forgot the alternatives, what came before.”And, true to his grandfather’s wishes, he also always stayed a Jew.Peres often told the story that when he went to the train station in 1934 with the rest of his family to join his father who had already moved to Palestine two years earlier, his grandfather hugged him and said, “My child, be a Jew.”His son Chemi mentioned his great grandfather’s parting remarks in his eulogy to his father. “You never forgot to be a Jew,” he said. “And I promise you from here, that neither will I.”And Peres was a Jew, through and through. It was the universalistic, humanistic expression of his Judaism that was most appreciated by the leaders of the world who attended his funeral – his striving for peace, his wanting to heal the world.But he was also a particularist Jew: one who had regular Shabbat dinners with his family, who recited Kiddush, who placed in his will the stipulation that the one song he wanted sung at his funeral was Avinu Malkeinu – one of the central prayers of the Rosh Hashana liturgy.So on Friday, two days before Rosh Hashana, in Jerusalem – the capital of the reborn state Israel – David D’Or sang a quintessentially Jewish prayer, using a traditional cantorial arrangement.“Our Father our King, have compassion on us, on our children and our infants,” D’Or sang. “Our Father our King, inscribe us in the book of good life. Our Father and King, renew for us a good year.”The leaders of the world sat listening in rapt attention, some of them with eyes closed.The symbolism of the Jewish journey of the last 100 years captured in that one moment was jaw-dropping.