"I prefer to choose a General who will be strong and able to stand and face the pressure that will be put on them regarding Israel,” said Danon. 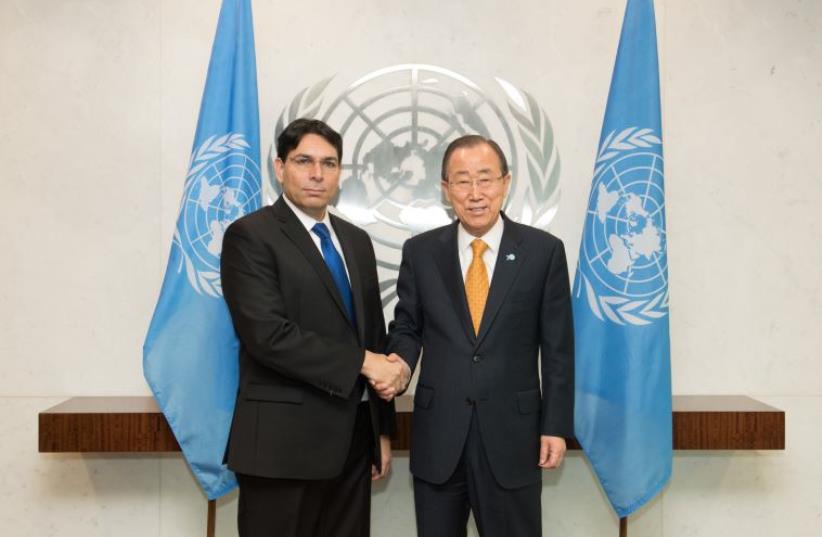 Israel's Ambassador to the UN Danny Danon with UN Secretary General Ban Ki-Moon
(photo credit: SHAHAR AZRAN)
Advertisement
NEW YOR K – Israeli Ambassador to the United Nations Danny Danon won’t reveal whom he supports to replace Ban Ki-moon as UN secretary- general, nor will he say which of the eight candidates he has met with privately.“Israel is only one vote in the General Assembly, but still people know that we are very active at the UN and they come get our support or blessing,” he told The Jerusalem Post this week.Danon, who will address The Jerusalem Post’s Fifth Annual Conference in New York next month, said he believes the race is still at its very early stages and he is not sure any of the candidates who were presented on Tuesday will be the final ones.“The bylaws are very vague, so basically someone could come at the last minute and join the race,” he explained.Danon emphasized that Israel would prefer that the elected candidate be “fair and balanced” toward the Jewish state.“We want someone who will be able to stand up in front of the pressure,” he added.“Some will say they want to choose a secretary, some will say they want to choose a general. I prefer to choose a general who will be strong and able to stand and face the pressure that will be put on them regarding Israel.”While he did not want to provide a name, Danon said there is a candidate among those introduced on Tuesday that he supports for the position.“I’m not the only one keeping the cards close to my chest. The superpowers are, too,” he continued.The General Assembly was formally introduced on Tuesday to eight candidates aiming to replace Moon in 2017. The candidates will go through three days of informal dialogues with the UN’s 193 member states and two observer states.While traditionally, the selection of a secretary-general has been conducted behind closed doors, this time General Assembly president Mogens Lykketoft said the process is “genuinely guided by principles of transparency and inclusivity.”“This is an historic moment,” Lykketoft said in his opening remarks as informal dialogues began. “As the UN grapples with multiple crises and the organization deals with some fundamental questions regarding its own role and performance, finding the best possible candidate to succeed Secretary-General Ban Ki-moon is absolutely crucial.”