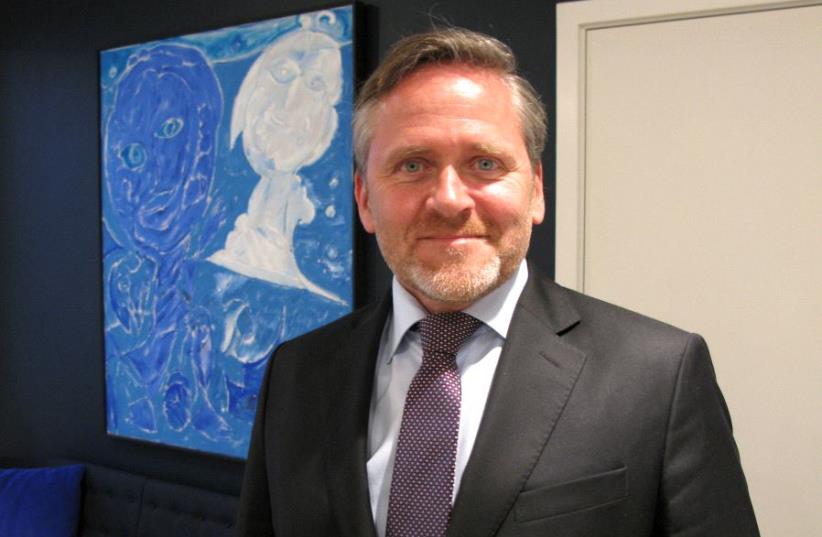 Denmark’s Foreign Minister Anders Samuelsen
(photo credit: REUTERS)
Advertisement
Foreign Minister Anders Samuelsen of Denmark, on a 36-hour first visit to Israel, met on Wednesday with President Reuven Rivlin, who thanked him for what the Danish government is doing on behalf of Denmark’s Jewish community.Samuelsen, speaking at the President’s Residence in the capital, said that Prime Minister Lars Lokke Rasmussen had condemned antisemitic incidents, in particular the February 15, 2015, attack against Great Synagogue of Copenhagen, in which a Jewish community member on security duty was killed (while a bat mitzva was in progress inside), while two members of the Danish Security and Intelligence Service were wounded, and had reached out to the community.“We fight antisemitism in Denmark,” Samuelsen said, and recalled with pride his country’s record in rescuing Jews from the Holocaust. “This visit reminds me of our history,” he said. “We have to remember...”Referring to his surname, which, he commented, had a Jewish ring to it, Samuelsen said that he did not know whether he had Jewish roots – “but I’m proud of my name.”Samuelsen was accompanied by a delegation that included outgoing Danish Ambassador Jesper Vahr and incoming Danish ambassador Charlotte Slente.Vahr is completing a four-year term.Rivlin spoke with Samuelsen following a meeting with a delegation from Jordan that had come to discuss stability and confidence building. The Jordanians had all come in their traditional robes.Rivlin said that he knew of Denmark’s important role in trying to bring the sides in the Israeli-Palestinian conflict together, but that this depends on mutual trust, which is difficult to achieve when Palestinian Authority President Mahmoud Abbas is unable to convince his own people. “We know that Abbas understands that it is in the interests of his people to go along with Israel, but he cannot convince them,” he said.He explained that Israel is not trying to gain time or to find excuses not to negotiate with the Palestinians, but that it is becoming increasingly difficult for Israelis to believe that anything positive will come from negotiations. “We voted on the Oslo agreement and it did not bring us anything,” he said, adding that after the 2005 withdrawal from the Gaza Strip, Israel suffered a barrage of rocket attacks.While Iran supports terrorist organizations and calls for an end to Israel’s existence, Rivlin could detect no signs for optimism in the foreseeable future.He was appreciative of the fact that Denmark is part of the international coalition dedicated to fighting Islamic State.Samuelsen, like so many other foreign ministers whose countries are not in the Middle East, advocated the two-state solution as a panacea for stability in the region and an end to violence, but conceded: “We realize that you live in a very difficult situation.”He emphasized the importance of standing together in the fight against terrorism and extremism.