The email was written by Anne-Marie Slaughter, who served as Clinton's director of policy planning at Foggy Bottom from 2009 until 2011. 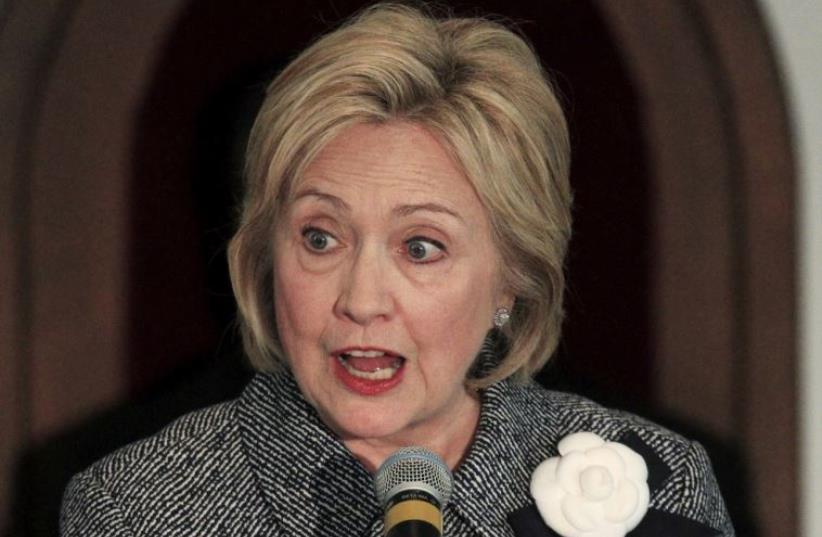 US Democratic presidential candidate Hillary Clinton speaks at the National Bar Association's 60th Anniversary of the Montgomery Bus Boycott in Montgomery
(photo credit: REUTERS)
Advertisement
A former top policy aide to then-secretary of state Hillary Clinton proposed a "pledge for Palestine" fundraising initiative that would have a "shaming effect on Israel" while bolstering the Palestinian leadership, newly declassified State Department emails show.Anne-Marie Slaughter, who served as Clinton's director of policy planning at Foggy Bottom from 2009 until 2011, wrote the email to senior Clinton staffers in late September 2010, just before the anticipated expiration of Israel's 10-month moratorium on construction in West Bank settlements.The Israeli government agreed to a temporary hiatus in building across the Green Line as a gesture to facilitate direct peace talks with the Palestinian Authority in late 2009. As the peace process was stagnating, Slaughter believed that the US needed to pursue "what may be a crazy idea" as a means of reigniting talks and expressing "a vote of confidence in a Palestinian state."Slaughter suggested that the US government solicit donations from wealthy philanthropists who would contribute to the Palestinian territories "as an expression of global solidarity with the Palestinians" while at the same time bolstering the political standing of Palestinian Authority President Mahmoud Abbas.The template for the initiative would be similar to billionaire investor Warren Buffet's "The Giving Pledge" campaign in which he urged fellow uber-wealthy captains of industry to give away large chunks of their fortunes to philanthropic causes.In the email, Slaughter believed that the initiative could also have a "shaming effect" on Israel since Washington anticipated that the government in Jerusalem "would be building settlement in the face of a pledge of a peace.""This is what diplomacy beyond the state should mean," Slaughter wrote.Israel is a topic that is oft mentioned in a batch of emails released as part of the trove related to the controversy over Clinton’s use of a personal email address.While serving as secretary of state, Clinton and her aides would often exchange advice on how to deal not just with Prime Minister Benjamin Netanyahu’s policies, but with his personality.Some of her interlocutors advise embracing him. Others suggest slapping him down. No one much likes him.The advice – at least what was solicited on her personal email – comes from associates who were not in government at the time of writing, among them Sidney Blumenthal, Martin Indyk and Sandy Berger.All three are Jewish. All three worked for President Bill Clinton when he had his own difficult relationship with Netanyahu during his first term as prime minister, from 1996 to 1999. Blumenthal was a political adviser, Berger was national security councilor and Indyk was ambassador to Israel.All three were in the private sector or the think tank world when they sent their notes to Hillary Clinton (Indyk later returned to the State Department as an Israeli-Palestinian peace broker in 2013-14, after she left office). And all three are likely to play a role in her administration should Clinton be elected president - she is currently polling as the Democratic front-runner.In a memo dated Sept. 30 2010, when the Obama administration was hoping to extend peace talks with the Palestinians past a period of a settlement freeze, Indyk argues for the importance of assuaging Netanyahu’s insecurities.“The reason for dwelling on Bibi’s psychology rather than his politics is that the latter all point in favor of making a deal,” Indyk writes. One of the key obstacles to advancing the talks, according to Indyk’s email: Netanyahu “seems to lack a generosity of spirit. This combines with his legendary fear of being a ‘freier’ (sucker) in front of his people.”His counsel: “Put your arms around Bibi: he still thinks we are out to bring him down. There is no substitute for working with him, even though he makes it such a frustrating process.”Berger, similarly, describes the difficulties of Netanyahu’s personality and the need to coddle him in a memo dated Aug. 24, 2010, when direct talks between Israelis and Palestinians resumed for a short period.Arab interlocutors are difficult, Berger says, but at least make clear what they will and will not accept. Netanyahu, he says, “either does not know himself or is not prepared to share.”Again, while Berger says that Clinton at times will have to be “tough” and push back against Netanyahu’s “most extreme demands,” he sees value in cultivating Netanyahu as a friend and confidante.“You are ideally suited to begin a series of in-depth conversations aimed at understanding his key concerns, how they can be met, what he would need from us and others,” Berger writes.Blumenthal peppers Clinton with advice frequently throughout her 2009-13 term as secretary of state, much of it examining polls. One from March 23, 2010 includes two polls of Israelis and American Jews on how each regards Obama.JTA contributed to this report.