Having come from Yad Vashem and its grim reminders, Steinmeier termed the current relationship of mutual trust between Israel and Germany as “miraculous.” 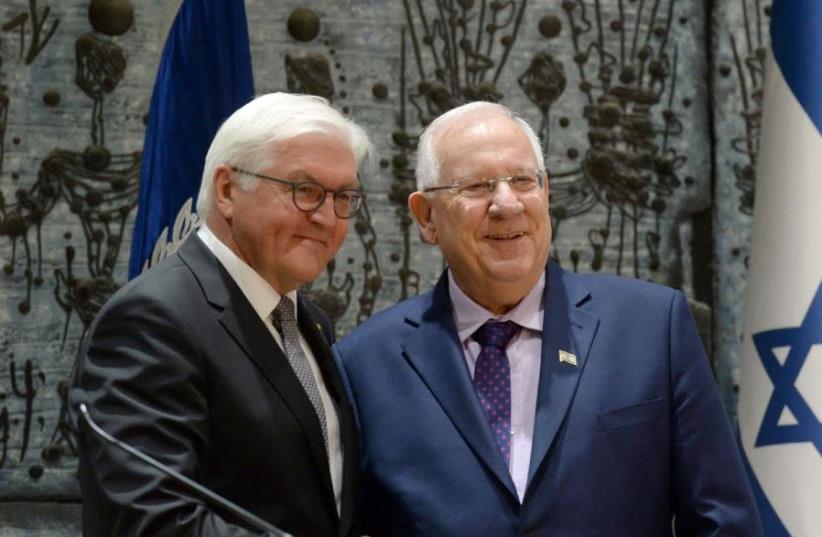 German President Frank-Walter Steinmeier meeting with Israeli President Reuven Rivlin
(photo credit: Mark Neiman/GPO)
Advertisement
Before attending a luncheon hosted by President Reuven Rivlin on Sunday, German President Frank-Walter Steinmeier emphasized the importance of maintaining the special relationship between Germany and Israel despite occasional disputes between the two countries.The luncheon at the President’s Residence came after Steinmeier placed wreaths at the graves of former president Shimon Peres and former prime minister Yitzhak Rabin on Mount Herzl and toured Yad Vashem. This was not his first visit to the Holocaust memorial and museum, as he had been there several times when he served as Foreign Minister, first from 2005 to 2009 and again from 2013 to 2017.Steinmeier said it was essential for him to visit Yad Vashem, implying that Germans would always have to be reminded of the inhumanity of their forebears, so that they would not sink to the same levels.Before that special relationship was established, Rivlin had been opposed to any relationship with Germany and had demonstrated against its first ambassador to Israel. But he welcomed Steinmeier with great warmth and enthusiasm, saying how happy he was to host and congratulate him on becoming President of the Federal Republic of Germany.Rivlin, who has known Steinmeier for years and met with him in several of his various capacities, said he was not surprised that the German president attained his present position.He called Steinmeier “a true friend of Israel,” and said the proof was in his choice of Israel as his first destination outside Europe since being elected president in March.Referring to the recent visits by German Foreign Minister Sigmar Gabriel and Steinmeier’s immediate predecessor, Joachim Gauck, Rivlin said that such meetings testified to the fact that “out of the traumatic past, which can never be forgotten, an honorable and special relationship can flourish between Germany and Israel.”Rivlin said that Steinmeier’s visit afforded the opportunity to thank his German counterpart for his contribution to that special relationship and to praise the German leadership for defending the principles of democracy in the world at large and in Europe in particular.Although there are many different shades of democracy, said Rivlin, everyone knows that democracy means freedom.And in a vibrant democracy there are many different voices, some loaded with criticism that is often difficult to bear. But because of Israel’s commitment to respect different ideas, it rejects the UNESCO resolution that casts Israel as an occupier of Jerusalem.“A nation cannot be an occupier of its own country,” he declared, “and we are not the occupiers of our capital.”Rivlin then voiced his appreciation for Germany’s opposition to distortions in the resolution.Rivlin then turned to Syria and said that, as a people which had known persecution and displacement more than any people in history, Israel could not be indifferent to the atrocities taking place on the other side of the border, and therefore a small hospital in Nahariya had become the world’s leading center for treating the wounded in Syria’s civil war, despite the fact the Syria is an enemy country. Israel provides medical treatment for all who need it, Rivlin said, and will continue to do so in the future.At the same time, he said, the international community must put an end to the humanitarian crisis that is harming not only the Syrian population, but endangers peace and stability in the whole region.Steinmeier had toured Jerusalem’s Mahaneh Yehuda market with Rivlin the previous night and had sampled local beer. He said it was a courageous gesture on Rivlin’s part to take him through the market, which he had found to be lively and colorful, although he imagined the stomachs of the respective security personnel for the two were churning.While at the market, the two presidents met and spoke with young Israelis and young German tourists. Some had come to work in volunteer projects for six months in order to strengthen the relationship, Steinmeier said, adding that this was also the purpose of his visit. “You know how often I came as foreign minister in good and not so good times,” he said, “and it was important for me to come now in my new position.”Having come from Yad Vashem and its grim reminders, Steinmeier termed the current relationship of mutual trust between Israel and Germany as “miraculous.” As good as things are, he said, he wanted more exchange visits and more friendship between the peoples of both countries.Alluding briefly to the friction surrounding the recent visit of Sigmar Gabriel, Steinmeier said, “The foundations of our relationship can withstand all such incidents. Our relationship is too important and too deep to be sabotaged by differences.”Steinmeier who later in the day spoke at the Hebrew University of Jerusalem, said the university conferred an honorary doctorate on him two years ago, an honor he treasured greatly.