‘Attempts to reach a Palestinian state are unrealistic’ 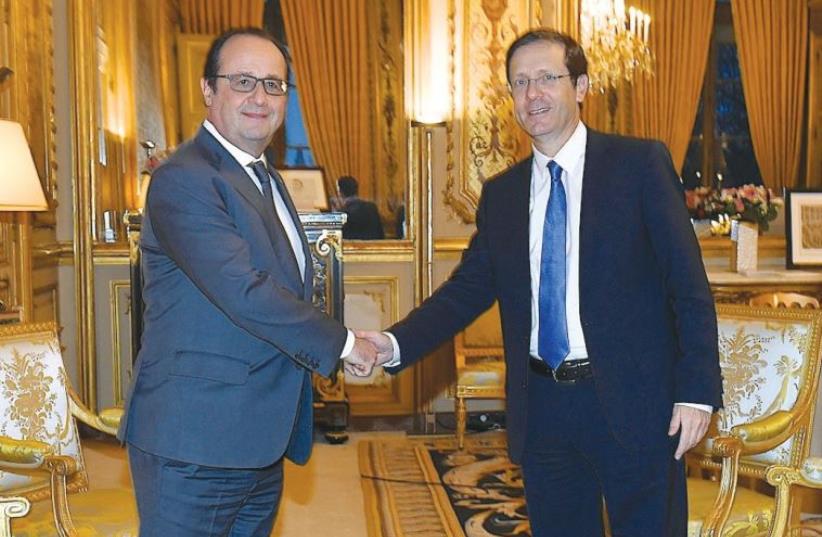 FRENCH PRESIDENT François Hollande welcomes opposition leader MK Isaac Herzog to Paris on Friday.
(photo credit: EREZ LICHTFELD)
Advertisement
PARIS – Opposition leader Isaac Herzog met on Friday at the Elysée Palace with French President François Hollande and Foreign Minister Laurent Fabius, presenting his new diplomatic plan of separation from Palestinian villages surrounding Jerusalem.The meeting lasted more than an hour and was described by a source close to Herzog as warm and friendly.Apart from discussing the diplomatic situation in the Middle East, the three spoke also at length about the French-Jewish community.The meeting in Paris took place against the backdrop of a French Foreign Ministry statement Friday morning condemning Israeli expropriation of farmland on the West bank, and the decision earlier in the week by EU ministers that all agreements with Israel are not applicable beyond the Green Line.Herzog told Hollande that “attempts to reach a Palestinian state now are unrealistic. A Palestinian state cannot be established currently because the Palestinians have no leadership that controls the whole territory and that could lead such a move.’’ Herzog added that, “First we must separate between Israelis and Palestinians, this is what all efforts must be focusing on; a separation that will be accompanied by security and economic measures, in a way that will bring about calm on the ground.’’ Referring to the latest decision by the EU and to the UN resolution proposed by France on Palestinian statehood, Herzog noted that “such decisions only reward terrorism and the BDS movement. They nullify the possibility of advancing regional moves.”Herzog added that “Israelis won’t accept anyone imposing decisions on them. Israel is a sovereign state, hence any such decision or step only damages Israeli public willingness to advance toward a change in the Middle East.’’ He called upon France to stop advancing any international resolutions which hurt Israel.Regarding the French-Jewish community, Hollande told Herzog that he is in constant contact with the Jewish leadership, and intends to meet again with the heads of the CRIF [French-Jewish umbrella organization] very soon.Prior to his meeting at the Elysée, Herzog and his wife, Michal, visited the Rue Pavee Synagogue in the old Paris Jewish quarter, founded by Herzog’s great grandfather, Rabbi Joel Leib Halevi Herzog, in 1914.Herzog signed the synagogue’s visitors book on the page after his father, the late president Haim Herzog, signed when visiting the shul in the late 1980s.On Monday evening Herzog is to take part at a ceremony commemorating prime minister Yitzhak Rabin, organized by the Paris Municipality. French Prime Minister Manuel Valls and Paris Mayor Anne Hidalgo are also to take part in the ceremony.