Huckabee on US action on UN vote and Kerry speech: ‘Cowardly betrayal of Israel'

Huckabee, a frequent visitor to Israel, arrived on Monday and will leave on Thursday as part of a delegation representing the Jewish Chamber of Commerce in the US. 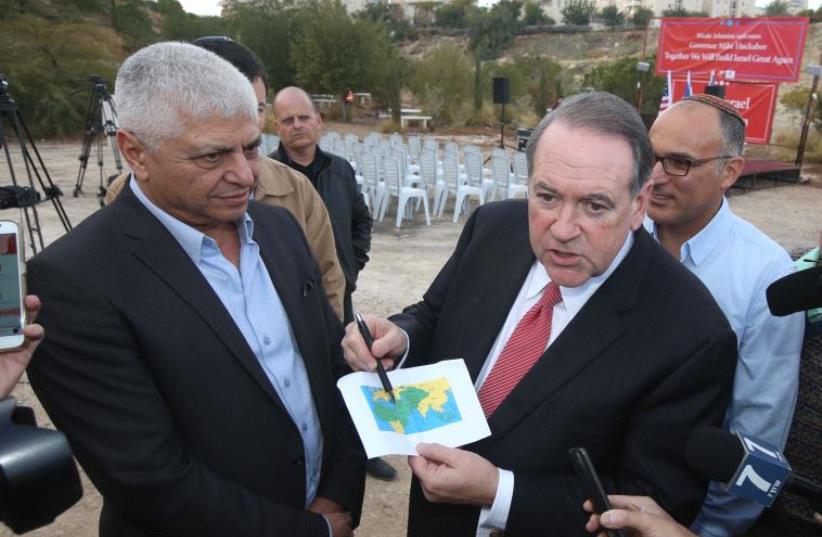 Mike Huckabee with Ma'ale Adumim mayor Beni Kashriel, pointing to Israel on a map of the world for journalists
(photo credit: MARC ISRAEL SELLEM/THE JERUSALEM POST)
Advertisement
Washington’s behavior in orchestrating the anti-settlement resolution at the UN, as well as Secretary of State John Kerry’s subsequent speech blasting the settlements, was a “cowardly betrayal” of Israel, former Arkansas Gov. Mike Huckabee said Tuesday.In an interview with The Jerusalem Post, Huckabee said those actions were likely a combination of vindictiveness by the Obama administration and an effort to tie the hands of the incoming Trump administration.“The way this administration is behaving in its last days of power is like a person who has to leave an apartment because the lease is up, and before they leave they are going to break every window, pull the plumbing out of the walls, and punch holes in the ceiling,” he said.“Last year the UN took one resolution on Russia, one on Syria, one on North Korea, and one regarding Iran,” Huckabee said. “They had 20 regarding Israel. Anyone – and I don’t care how much they hate Israel – anyone with even a tinge of objectivity cannot possibly believe that Israel deserved 20 spankings, and Russia, Iran, North Korea and Syria deserved only one each. I mean, no one in his or her right mind can say that the UN has become anything but a farce, rather than a force.”Huckabee, who waged an unsuccessful campaign last year for the Republican nomination, and was then subsequently offered – and turned down – a cabinet post by President- elect Donald Trump, said he hoped that Trump would take actions to “defund the UN.”“It is a waste of taxpayer money,” Huckabee, said. “The money could be better spent on US veterans; it could be better spent put in the Atlantic Ocean and let the fish feed on it.”Huckabee, a frequent visitor to Israel, arrived on Monday and will leave on Thursday as part of a delegation representing the Jewish Chamber of Commerce in the US. The visit was co-sponsored by The Yes! Israel Project.Huckabee, who met Netanyahu on Tuesday before going to Ma’aleh Adumim and then Amona, said the UN “embarrassed itself with its recent action,” as did the US by not only standing by and letting the resolution pass, “but apparently encouraging it to happen.”It is not the settlements that are illegitimate, Huckabee said, but rather “the actions of the UN – it is the one acting without regard to reality.”Huckabee said it was “absolutely stunning that the Obama administration would spend four years doing absolutely nothing in the Middle East of any significance, other than helping to arm Iran – which is foolish and destructive – and in the last days decide to try and take one last shot at Israel and its sovereignty, and to do it in such a way that is shameful.”Huckabee took part in a cornerstone laying ceremony in Ma’aleh Adumim. “What I tried to do there was make sure the cameras looked up there [at Ma’aleh Adumim] and saw that this is a very well-established, modern, comfortable, livable city of 41,000 people.”He said this was important for the American public to see.“Most Americans hear the term ‘settlement’ and have no idea what they are talking about,” he maintained.“They think of it as a little patch of land with pitched tents. They don’t really appreciated that these are well-established communities with neighborhoods, parks and shops – a very modern setting of cities.”Huckabee, who said he has spoken with Trump about Israel, maintained that the president-elect will be “a strong supporter of Israel.” By expressing support for moving the US Embassy to Jerusalem, as well as nominating David Friedman as the next ambassador to Israel, Huckabee said Trump was signaling that there will be a dramatic change in policy toward Israel under his administration.Huckabee denies that he was ever considered by Trump as ambassador to Israel, as reported last month, and that the issue was never discussed with him. “Whoever pretends to be a source for that story clearly did not have a clue what they were talking about,” he said.Regarding whether he believes that Trump will indeed move the US Embassy to Jerusalem, he replied: “I think it is possible, and admirable if he does.”