Israel and Singapore: The ties that bind 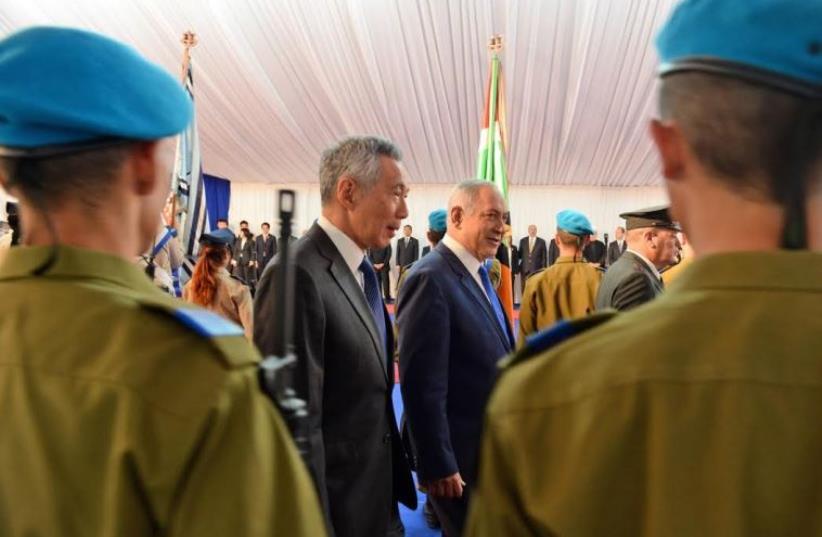 Prime Minister Benjamin Netanyahu meets with visiting counterpart from Singapore, Lee Hsien Loong
(photo credit: HAIM ZACH/GPO)
Advertisement
Last week Lee Hsien Loong, the prime minister of tiny Singapore, paid an official visit to Israel. It was the first visit of its kind. Accompanied by ministers and businessmen, he and his host, Prime Minister Benyamin Netanyahu, issued statements praising the good relations and joint ventures between the two countries in the fields of hi-tech, cyber, water, environmental conservation and more.Netanyahu also mentioned the first prime minister of Singapore, Lee Kuan Yew, who happens to be the father of the current one and is considered in his country as the founder of the republic. Netanyahu “forgot” to mention the first chief minister, David Marshall, who was a local Jew, whose legacy has been erased from Singaporean history books by the dictatorial regimes of father and son.However, what was missing during the visit in all public declarations was the glue that binds the two countries. That glue, according to foreign reports, is the military, intelligence and security ties between the two countries. The ties are very close to the extent that Singapore has over five decades become a very important market for Israel’s military industries not only in Southeast Asia but on a global level, and a partner in joint research and development ventures of advanced weapon systems. The country attracts hundreds of former Israeli military and intelligence officers and hosts major security corporations such as Israel Aerospace Industries, Rafael Advanced Defense Systems and Elbit Systems, in addition to the Israeli Embassy with its military attachés.Surprisingly, it was the guest who recalled the secret past military ties by saying, “We thank Israel for your assistance when Singapore was forced to get its independence in 1965, when our security and survival were in doubt. Israel Defense Forces helped to build our armed forces when other states refused.”Lee also recalled how he first visited Israel in 1977 when he was a junior military officer while escorting Lt.-Gen. Winston Choo, then his country’s chief of staff and now the ambassador in Tel Aviv.Singapore is a modern-day city-state spread over 700 square kilometers, with a population of 5.5 million. Seventy-five percent are of Chinese descent, 13% Malayan Muslims and 10% Indians. It is surrounded by two large Muslim nations – Malaysia and Indonesia.In that sense Singapore sees parallels between its situation and Israel’s: two small nations with advanced economies, surrounded by hostile states with different backgrounds, religions and cultures.This seeming similarity brought Singapore in the mid ’60s to ask Israel to build its armed forces, after India, Egypt and Britain declined.In 1965 Israel sent a military delegation led by Col.Yaakov Elazari and later by Binyamin Ben-Eliezer, who years later would be the defense minister. The Israeli advisers advised Singapore to form an army based on the IDF’s experience, tactics and doctrines. To conceal the presence of their nationality the Israeli advisers were locally referred to as the “Mexicans.”After forming the armed forces, Israel began supplying Singapore with weapons of all sorts and, according to foreign reports, it continues to do so today. According to these reports, the arms deals have included patrol and missile boats, upgrading of fighter planes, intelligence equipment, missiles and control and command centers.Defense News reported that the Singaporean air force is flying two squadrons of Israeli- made drones. One is composed of the Hermes model manufactured by Elbit, and one the Heron made by IAI.The French newsletter Intelligence Online wrote last year that Singapore also purchased dozens of Israel made Merkava tanks to be used as artillery to repel any future invasion of the country.Since the Defense Ministry doesn’t name the countries that purchase weapons from Israel, it is unknown what the export volume to Singapore was. But if all the deals, as reported in the foreign media, are added up, it is possible to conclude that Israel has sold Singapore over the years weapons worth billions of dollars.It was also reported that the two countries’ military industries cooperate in joint ventures in third countries.For example, IAI and its Singaporean counterpart won a tender to upgrade Turkish fighter planes. Another pattern revealed by some foreign reports is that Singapore invests money in the research and development of Israeli weapons systems and in return gets to manufacture them in its own industries.One example stands out. For the last five years there were consistent reports in the foreign media that Singapore was financially involved in the Israeli-made Iron Dome, a system to “kill” rockets and missiles, which was used in the last two wars in Gaza.Both Israel and Singapore didn’t comment.Last week during Lee’s visit, it was the Singaporean Ministry of Defense that broke its own silence by announcing that it had bought advanced radar from Elta, a subsidiary of IAI. This radar is part of the Iron Dome system.In the last decade-and-ahalf, since 9/11/2001, intelligence cooperation between the two nations to combat terrorism has been on the increase. Together with foreign intelligence agencies, Singapore exposed terrorist cells of al-Qaida and recently Islamic State that originated in neighboring Malaysia, Indonesia and the Philippines.The cells planned to hit ships anchoring in or sailing to the port of Singapore, embassies and other Western installations, including Israel’s.The Mossad, for its part, uncovered a Hezbollah plot that spread from the Philippines to bomb the Israeli Embassy in Thailand.One can expect that after the visit of Lee, who invited Netanyahu for a reciprocal visit, Israeli-Singaporean relations will develop even further.