Israel strikes a chord with a Milwaukee musician and Houston family

“For a while now, I’ve thought living in Israel was a better, more wholesome life than living in any other country, especially in America." 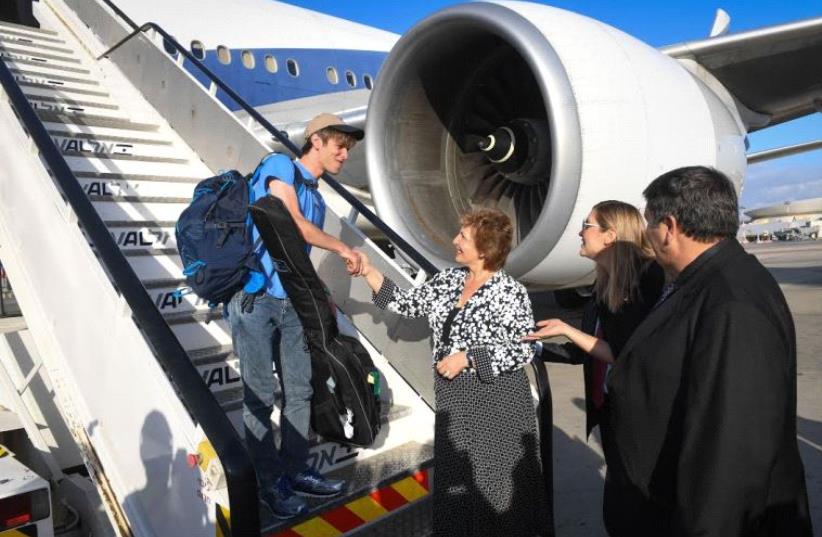 Ilan Eckhardt is welcomed at Ben-Gurion Airport on July 19 by Immigration and Absorption Minister Sofa Landver.
(photo credit: SHACHAR AZRAN NEFESH B’NEFESH)
Advertisement
Among the 218 immigrants from North America who arrived on Nefesh B’Nefesh’s 54th flight from North America on July 19 were Ilan Eckhardt, a Milwaukee musician, and Linda Grodner, who made aliya with her two daughters and dog from Houston, Texas. The aliya flight was facilitated in cooperation with the Immigration and Absorption Ministry, The Jewish Agency for Israel, Keren Kayemeth LeIsrael, and JNF-USA.A beaming Eckhardt, 22, arrived alone with his guitar in hand.“For a while now, I’ve thought living in Israel was a better, more wholesome life than living in any other country, especially in America,” he said.Eckhardt plans to study at the prestigious Rimon Music School in Ramat Hasharon, and plays no fewer than eight instruments: piano, guitar, violin, saxophone, bass, drums, mandolin and ukulele.Besides being a one-man band, he wowed Israeli television viewers with his superb singing in the popular TV show Rising Star (Hakochav Haba) three years ago.“I’ve always known that I wanted to do music. Rimon is world-renowned, so it was a no-brainer for me to do this,” he said.His dream is to embark on a musical career in Israel, he said, explaining that he was raised by his family and teachers with a strong Jewish and Zionist identity. He studied at religious schools in Wisconsin and Chicago, and graduated from the Cooper Yeshiva High School for Boys in Memphis.“It was always more of a question of how to do it,” he said. “For thousands of years, my ancestors couldn’t move here and it has been so difficult to do. But I finally got to do it!”A love of music is for him a family affair. Going back one generation, his grandmother was a concert pianist who once played with Liberace. His father, Joel, is an opera singer and cantor, while his mother, Chana, is a concert pianist and teacher. His three brothers are also musicians.“My grandmother would teach me the piano one hour every day except for Shabbat for seven years, from the age of four to 11. Her name was Beatrice Sharp-Karan (‘B Sharp’ was her nickname).“I got lessons from the first chair violinist of the Milwaukee Symphony Orchestra. My mother was the first chair in the Milwaukee Youth Symphony Orchestra. My father also recorded CDs with Ben Zion Solomon, the father of members of the Moshav Band, Soul Farm and the Solomon Brothers.“We used to be referred to as the ‘Jewish Von Trapp Family.’”After high school, Eckhardt came to Israel to study at Yeshivat Orayta in Jerusalem’s Old City. He started busking on Jaffa Road in Jerusalem and went to audition for Rising Star at Mike’s Place bar. He was accepted and reached the semifinals.Although he returned to the US for a while, he was now determined to make aliya, and decided to come via Nefesh B’Nefesh. He is initially staying with an older brother and his family in Ra’anana.Asked what his dreams are, Eckhardt said: “I hope to be making a living off of music in one capacity or another; and I hope that I can bring positivity to the world and influence the next generation of Jewish musicians to continue the pursuit of higher music education, i.e. formal training and college. I hope to eventually teach as well.”ALSO ON the Nefesh B’Nefesh El Al flight from New York were an emotional Linda Grodner, 57, her two daughters, Gila, 15, and Kayla, 12, and their Pomeranian named Sonny from Houston, Texas. Linda’s husband, Brian, died three years ago of cancer at the age of 55, and her oldest daughter lives in Wisconsin, where she has a successful marketing career. 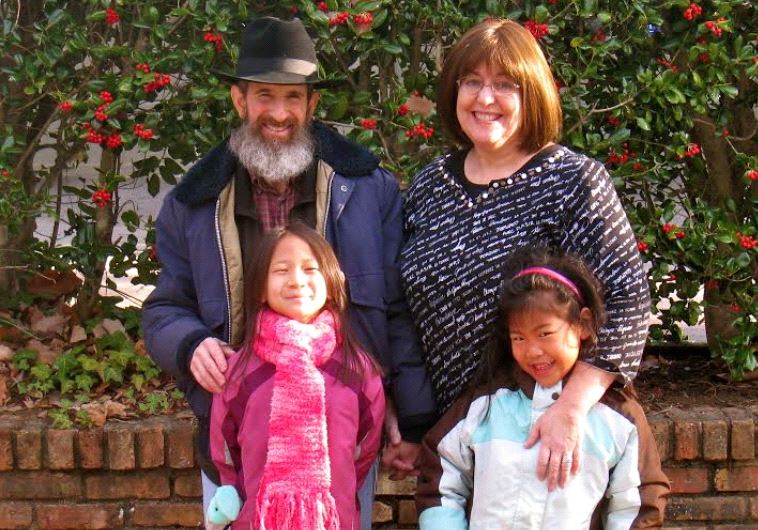 “My late husband and I always dreamed of making aliya and visited Israel several times,” Grodner said. “I made aliya with my children because I believe that the strongest way to establish and preserve their Jewish identity is to live in a Jewish world.”Among those greeting them at Ben-Gurion Airport’s Terminal 1 were a group of girls from her daughters’ new school in Beit Shemesh, carrying a photograph of Gila and Kayla.Describing her excitement at finally making the move to Israel, Grodner said: “The Nefesh B’Nefesh staff were enthusiastic and genuinely excited to see us make aliya. Our plane was full of families and the excitement could be felt in the air. I will not forget walking off the plane and becoming an Israeli citizen.”The Grodners adopted their two youngest daughters in China, and enrolled them in the Torah Day School in Houston when they moved from Birmingham, Alabama, after Brian was diagnosed with cancer in late 2009.“Because of my children’s appearance, they will always be different,” Grodner said. “I pray that in Israel their differences will be celebrated and appreciated as there are so many different types of Jews here. I also want to be part of something larger than myself. Israel is a young vibrant country with history still to be made. I want to be part of Israel’s story.”Asked what she planned to do for a living in Beit Shemesh, where they have rented an apartment, Grodner said: “By education and training I am an occupational therapist, but I retired when my husband became ill and began to work with him in his business of brokering equipment for the sawmill, forestry, logging and woodworking industry. I will continue to do this work as it is flexible and allows me to work anywhere in the world.” A day after their aliya, Grodner added: “Our apartment is perfect! We have a yard and an incredible view. We have purple, pink, orange, yellow and white flowers blooming. I can’t help but think how much Brian, alav hashalom, would have loved this place, and I definitely feel his presence.”As for their dog, Sonny, Grodner said she got him for Gila because she was having a difficult time after the death of her father. 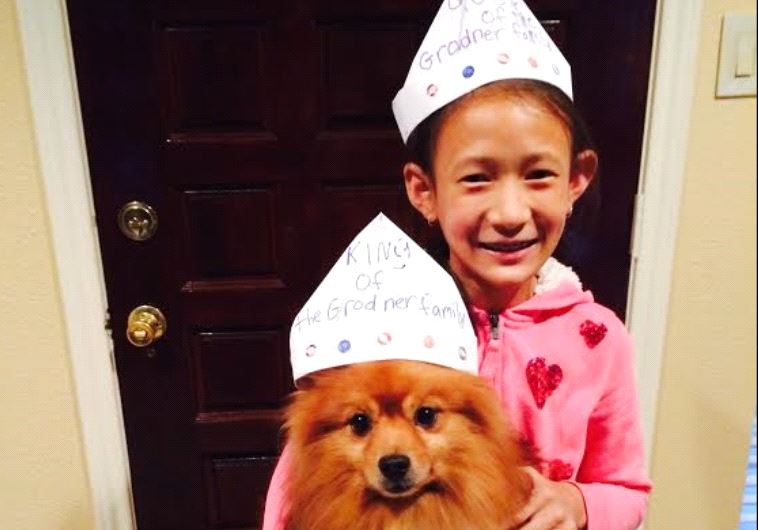 “I remember how much I loved my dog when I was her age, and he was a true friend. I wanted her to have this same unconditional love. Gila and Sonny do not think that he is a dog. He enjoys riding in his stroller and Gila dresses him in baby clothes and feeds him in a makeshift high chair!”Among those attending the upbeat welcoming ceremony for the newcomers at Terminal 1, which included a musical performance by hassidic singer Benny Friedman, were Nefesh B’Nefesh co-founders Rabbi Yehoshua Fass and Tony Gelbart, Jewish Agency Chairman Natan Sharansky, Immigration and Absorption Minister Sofa Landver, KKL-JNF World Chairman Danny Atar and MK Avraham Neguise.In addition to five sets of twins and two dogs, the olim included a diverse mix of people from 17 US states and two Canadian provinces, former servicemen from three US Armed Forces units, families of all sizes, young professionals and youngsters planning to join the IDF.This summer, Nefesh B’Nefesh plans to fly in a total of 2,000 immigrants to Israel. This latest flight was the first of two charters set to help reach that goal, in addition to nine group aliya flights, as well as individuals and families arriving independently.The Jerusalem Post and Nefesh B’Nefesh are pleased to cooperate on the “Meet the Oleh” project. Founded in 2002, Nefesh B’Nefesh in cooperation with the Israeli government and The Jewish Agency for Israel is dedicated to revitalizing aliya from North America and the UK.