The feeling inside the PMO is that such a meeting could help “change the atmosphere and calm things down,” the official said. 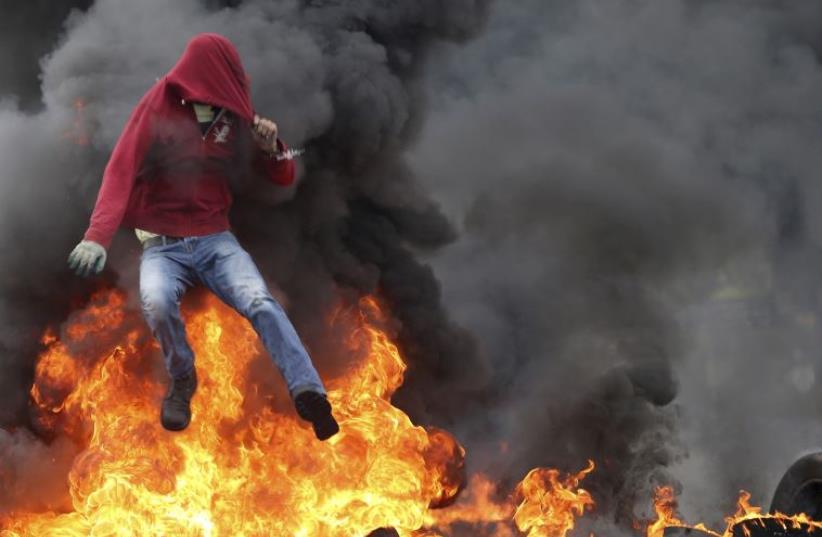 A Palestinian protester jumps over burning tires during clashes with IDF troops near the Jewish settlement of Beit El
(photo credit: REUTERS)
Advertisement
Prime Minister Benjamin Netanyahu is ready to meet with Palestinian Authority President Mahmoud Abbas “anyplace and anytime,” an official in the Prime Minister’s Office said Tuesday in response to a French effort to set up such an encounter.The trouble, the official said, “is that the Palestinians have refused such a meeting.”French Foreign Minister Laurent Fabius raised the idea of such a meeting last week during a meeting he had in Paris with Interior Minister Silvan Shalom, who is also the head of negotiations with the Palestinians. While the PMO has responded positively to the idea, the Palestinians – according to the official – continue to refuse to meet.The feeling inside the PMO is that such a meeting could help “change the atmosphere and calm things down,” the official said.Netanyahu himself reiterated his readiness to meet, at a press conference with the foreign press he held two weeks ago. He said he has called for such a meeting “repeatedly,” and was open to it now.“I’ve been talking to [US Secretary of State] John Kerry and other leaders about such a meeting. I think it’s potentially useful, because it might stop the wave of incitement and the false allegations against Israel,” he said. “So, I’d be open to meeting with Arab leaders and the Palestinian leadership in order to stop this incitement and set the record straight.“I’m willing to meet him, he’s not willing to meet me,” Netanyahu said at the time.In a related development, a government official said Jerusalem was open to the idea of live-streaming onto the Internet the feed from surveillance cameras to be positioned on the Temple Mount. In addition, the feed is also expected to be monitored by the Jerusalem police and the Wakf, the Islamic religious trust that administers the site. Jordanian officials have reportedly expressed interest in the livestream as a way of increasing transparency.“We are open to the idea, and will be working with the Jordanians to move forward,” one government official said. "We think transparency serves our interests.”According to a plan announced Saturday night by Kerry, Israeli and Jordanian teams will work out the details of the cameras’ operation, which he said could provide “comprehensive visibility and transparency and that could really be a game-changer in discouraging anybody or disturbing the sanctity of this holy site.”Senior Jordanian figures criticized the PA on Tuesday for rejecting the idea of installing security cameras on the Temple Mount.The Jordanians explained that the cameras would be aimed at “protecting the Aksa Mosque by documenting what’s happening at the site.”PA officials have over the past few days dismissed the proposal, arguing that Israel would use the surveillance to arrest Palestinians “under the pretext of incitement.”PA Foreign Minister Riyad al-Maliki said earlier this week that the Israeli-Jordanian agreement to install the cameras was a “trap.”The Amman-based Al-Ghad newspaper quoted Jordanian politicians denouncing Maliki’s remarks as “inappropriate and unfair.” They said the PA leadership should have relayed its position on the cameras directly to the Jordanian government instead of making such “inflammatory” public remarks.Adnan Abu Odeh, a veteran Jordanian politician and former adviser to both King Abdullah and King Hussein, said he did not believe the cameras would serve Israel’s interests, as the PA claims. “The cameras will document everything, including those who want to assault Palestinians or Israelis,” he said. “The cameras will document anyone who carries out an assault or Jews who want to pray there.”Abu Odeh dismissed Maliki’s remarks as “provocative, tasteless and inappropriate.” It is in the interest of the Palestinians to have cameras at the Temple Mount, he said.Former Jordanian parliament member Bassam Haddadin said he did not know whether the PA leadership shared Maliki’s opposition to the installation of the cameras. Noting that Jordan had requested the installation of the cameras, Haddadin demanded that the PA leadership clarify its position on the issue.Jordanian columnist Musa al-Ma’ayta also criticized Maliki’s remarks, saying it was “inappropriate” for a PA minister to make such allegations against Jordan, “after all that we did for the sake of the Aksa Mosque.”Jordanian journalist Awwad al-Khalayla said Maliki’s opposition to the cameras sends a message to the international community that the Palestinians have something to hide. “Maliki should have welcomed the decision to install the cameras, because they would document Israeli violations against Muslim worshipers,” he said.Khalayla condemned Maliki’s stance as “clumsy,” saying it reflected “clear and deliberate ignorance” on his part.Meanwhile, Jordanian minister of wakf affairs, Hayel al-Daoud, defended the decision to install cameras on the Temple Mount. He said the cameras were meant to protect the site, and added that Jordan alone was responsible for installing the cameras, and Israel has no right to intervene in the decision.The Jordanian-controlled Wakf in Jerusalem held an emergency meeting on Tuesday to discuss the latest tensions on the Temple Mount. At the end of the meeting, the department issued a statement in which it emphasized that the Aksa Mosque and its entire compound, including the “Al-Buraq Wall” (Western Wall), belong only to Muslims.This would not be the first time that cameras have been placed on the Temple Mount and footage broadcast live.In 2007, the Antiquities Authority placed three cameras at the Mugrabi Gate that leads to the Mount, to show excavations at the site to repair the damaged wooden bridge there, and to use the live-stream to try to dispel Muslim fears being fanned at the time that the excavations were an attempt to undermine the al-Aksa compound.