Which comes first, peace or the embassy move? 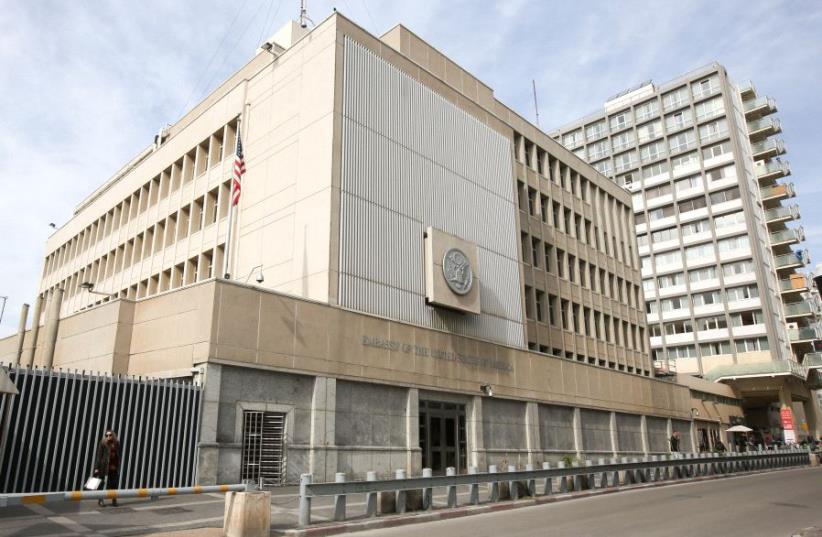 US Embassy in Tel Aviv
(photo credit: MARC ISRAEL SELLEM)
Advertisement
Politicians from Prime Minister Benjamin Netanyahu’s Likud party expressed disappointment with US President Donald Trump’s announcement that he wants to try to make peace between Israel and the Palestinians before considering moving the US embassy from Tel Aviv to Jerusalem.“I want to give that a shot before I even think about moving the embassy to Jerusalem,” he told interviewer Mike Huckabee on the former Arkansas Governor’s show “Huckabee” on the Trinity Broadcasting Network on Saturday.“If we can make peace between the Palestinians and Israel, I think it’ll lead to, ultimately, peace in the Middle East, which has to happen,” he said.Asked if there was a time frame for the embassy move, Trump said: “We’re going to make a decision in the nottoo- distant future.”Trump signed a temporary order in June to keep the US Embassy in Tel Aviv, despite a campaign promise he made to move it to Jerusalem. He will have to make another decision on the issue at the end of December.
Trump delays moving US embassy to Jerusalem (credit: REUTERS)
Jerusalem Affairs Minister Ze’ev Elkin said he believed Trump made the wrong decision to trust Palestinian Authority President Mahmoud Abbas.“I am very disappointed that President Trump chose to delay implementing his campaign promise to move the US embassy to Jerusalem due to an illusion that a real peace process can be advanced with the current Palestinian administration,” Elkin said.“Anyone who sees the incessant incitement from the PA, which refuses to stop paying salaries to terrorists, elects a murderer as Hebron mayor and embraces Hamas, understands that the last thing to expect from Abbas now is advancing peace.”Jerusalem Mayor Nir Barkat said he was still confident that Trump would keep his promise to move the US embassy to Jerusalem.“Moving the US embassy to Jerusalem, the eternal capital of the State of Israel and the Jewish people, is the right thing to do, with or without a peace agreement,” Barkat said.While on a tour of Samaria with visiting international parliament members brought by the Israel Allies Foundation, Deputy Foreign Minister Tzipi Hotovely said that all embassies must be in Israel’s capital.“All the embassies should be located in Israel’s capital, Jerusalem,” she said in a video she posted on Twitter.“We all know that Jerusalem will remain in Israel’s hands under any future agreement.“Therefore it’s important not to condition the moving of the embassy on progress talks with the Palestinians, who are very far from the word peace – and instead incite hate and violence.”Likud MK Yehudah Glick told that delegation of parliamentarians about the importance of recognizing that Jerusalem is part of Israel.“We do not need the recognition of the world to Jerusalem, the world needs it,” Glick said.“Every leader has a choice, he can chose whether he wants to be a Pharaoh or a Cyrus. Every president, every leader can chose – he can chose to be part of the Godly historical events that are happening right now.”Those who do, “will become part of eternity. If you decide not to, you are forgotten in the history of the world,” Glick said.Glick later said that the president should be given the benefit of the doubt.“At least he was humble enough to say he may not succeed,” Glick told website Breaking Israel News.“We all want peace. Real peace will be when the world recognizes Jerusalem as the eternal capital of the Jewish people. Trump said he would recognize this, and we expect him to do it. I don’t think that transferring the embassy should happen after we achieve peace, but as part of achieving peace. Any delay will not get us closer.”Jerusalem city council opposition leader Fleur Hassan-Nahoum of the Yerushalmim Party said the Israeli government deserved a share of the blame for not promoting Jerusalem as Israel’s capital.“The transfer of the American embassy to Jerusalem is not a prize or a bonus for the State of Israel, but it is a necessary step which Congress decided upon many years ago,” she said. “Trump, like all his predecessors, made the statement about moving the embassy before he was elected – and then backed away when he took office.“However, it would be hypocritical of us to complain about the President of the United States – when our own country the State of Israel itself does not implement decisions it has taken to transfer all the ministries and government departments to the capital,” Hassan-Nahoum continued. “Unfortunately, we see how politicians speak in grandiose terms about strengthening the status of Jerusalem from the podium, but in practice very little is being done to make it happen.”Only MK Yoel Hasson, new faction chairman of the Zionist Union, was prepared to defend Trump’s decision not to move the embassy.Hasson said embassies moving to Jerusalem will be one of the products of a successful peace process.“The president, like his predecessors, understood that reality is different from an election campaign,” Hasson said. “There is no doubt that every embassy should be in Jerusalem, and every Israeli government that did not persuade the world of this has failed. But Trump realized there is a historic opportunity to advance a regional peace process with dialogue between Israel and the Palestinians. Any unilateral step could destroy this opportunity and add tension in the region.”

Reuters and Jerusalem Post staff contributed to this report.