Rivlin: "The State Comptroller needs the skin of an elephant because nobody likes to be criticized." 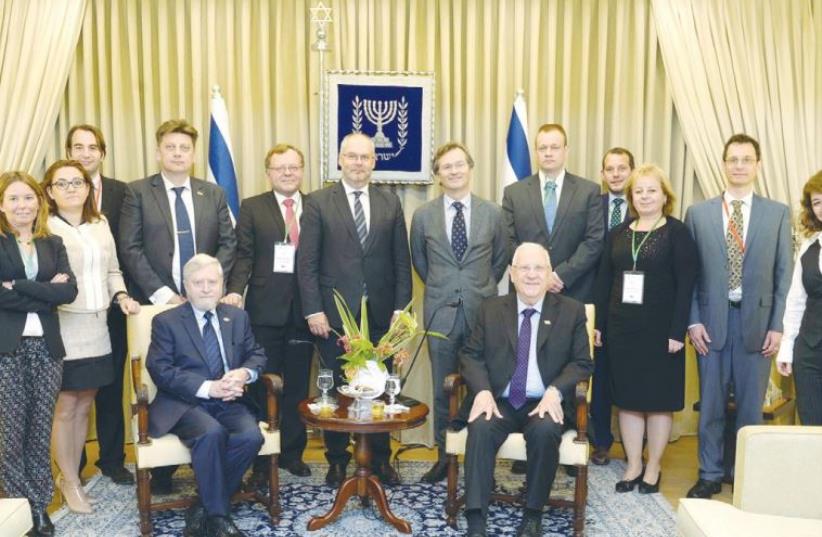 PRESIDENT REUVEN RIVLIN (center right) hosts State Comptroller Joseph Shapira and European state comptrollers in Jerusalem at the President’s Residence
(photo credit: Mark Neiman/GPO)
Advertisement
Cyber-based activity is shaping up as the greatest threat to world security, Israeli, European and Asian comptrollers said at a seminar hosted by State Comptroller Yosef Shapira on Tuesday.Governmental comptrollers and ombudsman from the US, Austria, Estonia, Finland, Germany, India, Ireland, Latvia, Lithuania, Poland, Spain, and Sweden commended Shapira’s initiative in a meeting with President Reuven Rivlin. The officials – who often act as gatekeepers, auditors and investigators – emphasized the importance of global cooperation in fighting cybercrime.“The job of defending democracy is not an easy one,” Rivlin said. “The state comptroller needs the skin of an elephant, because nobody likes to be criticized.”Such independent officers are “a fourth branch of government” and the State Comptroller’s Office is “an important tool for the State of Israel and for Israeli democracy...independent, efficient and strong,” he said, noting how it investigates issues in real time.Rivlin labeled cyber-based crimes a significant, world-wide threat.“This has become a very real war in which we all have to fight together,” he said In his comments, Shapira said Rivlin – a friend since childhood – represented the Jewish values of unity, solidarity and mutual responsibility.He emphasized the need “to stand together” in the battle against undemocratic forces that try to change the life styles and rights of citizens.State Comptroller’s Office Director General Eli Marzel echoed those sentiments as he spoke of “working together to mitigate this threat on all levels.”US Government Accountability Office head and Comptroller General Eugene Louis Dodaro called cyber, or computer-aided crime, “the greatest risk.”