“Even if we rescue 50% of the potential, we will still be rescuing five times more food that we are today.” 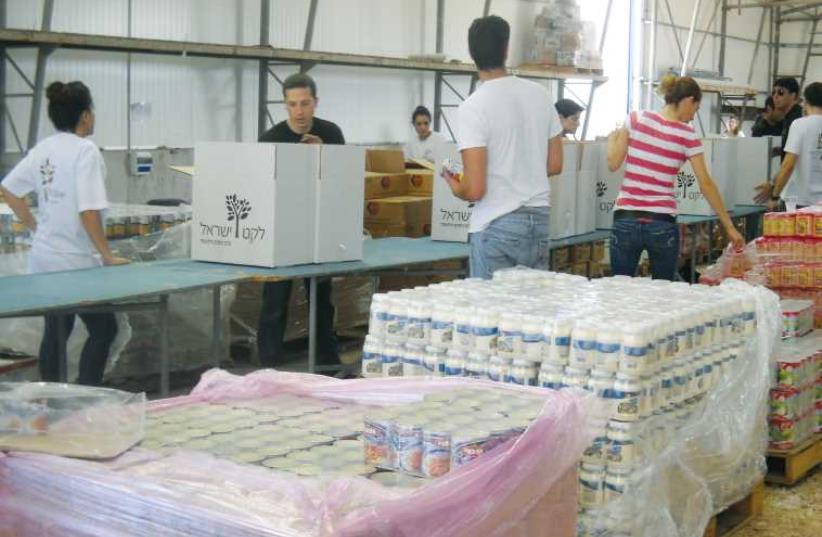 Volunteers at Leket Israel, The National Food Bank, package food for needy families.
(photo credit: Courtesy)
Advertisement
All citizens of Israel should have the right to eat food with the highest level of safety standards, whether they are needy or not, Gidi Kroch, CEO of Leket Israel – the National Food Bank said on Thursday.Speaking to The Jerusalem Post, Kroch discussed the impact that the Food Donation Act, which passed a preliminary vote in the Knesset plenum on Wednesday (41 in favor and 0 opposed), could have on the food rescue industry in Israel.The Food Donation Act is a bill, based on the Good Samaritan Protection Law in the United States, which would protect food donors, donating food in good faith to a nonprofit agency, from liability in the event that the food causes anyone harm.“This law is also declarative.  It sends a message that you can come donate your food through non-profit organizations and if this is done within this framework you will receive protection,” he said.“For the suppliers, legal protection is less important than their reputation. What they do want, through this law, is regulation and basic criteria that the NGOs will have to stand by in order to receive their food donations,” he said.According to Kroch, the passing of the bill would create regulation in the field of food rescue.“Charities that cannot meet the criteria by upholding food safety, despite their good intentions, will be forced to cease their activities in the field and leave food rescue to NGOs who can uphold food safety – this will minimize the risk for everyone: from the suppliers to the non-profits to the needy,” he said.He added that the law would provide suppliers or organizations who would like to donate food a
feeling that they are “more protected.”“Leket Israel operates at the highest standards of food safety, but despite this, the suppliers would like to see something regulatory that can’t be changed under law,” he said.“It is important to note that in the US this law is already present for 19 years at both federal and state levels and nobody has ever sued under this law,” he added. “The higher standards of food safety prevent people from suing; there is protection and so there is no reason to sue.”Kroch said that should the law pass in the Knesset, it will be up to the Health Ministry to determine the criteria to be put in place to regulate food safety.“The criteria will include what temperature the food needs to be stored, what types of food can be donated, can you donate salads which can go bad quickly or other issues like this – and the regulation should be for all NGOs,” he said.According to Leket Israel, to date the organization rescues some 2 million warm meals per year.  However a recent report it released found that there is the potential to rescue between 15-20 million warm meals per year.“Even if we rescue 50% of the potential, we will still be rescuing five times more food that we are today,” said Kroch. “And we are talking only about cooked meals. There is also the food industry in Israel that can increase its donations due to this law.  It will provide food manufacturers a backing to donate more,” he said. “The potential of this law is much greater than cooked meals - it can impact the entire food industry.”