Labor leaders announce that compromise on religious issues will be necessary no matter what. 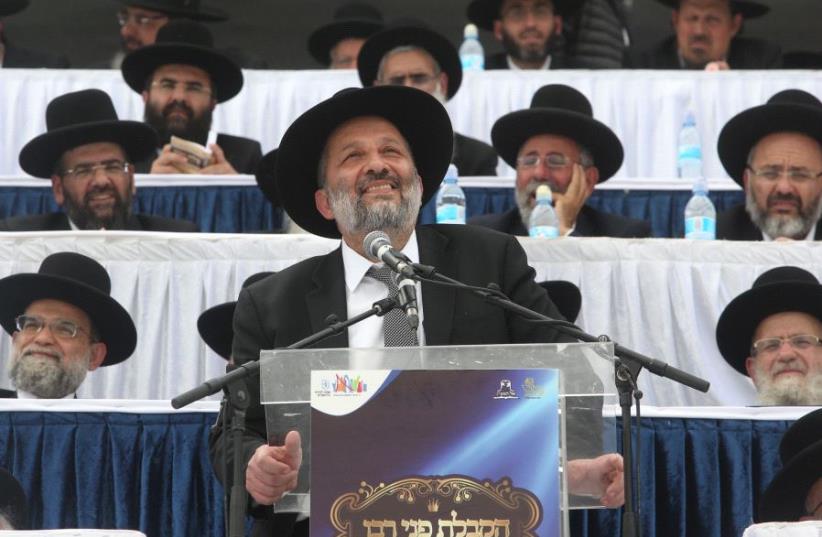 Aryeh Deri at Shas event
(photo credit: MARC ISRAEL SELLEM)
Advertisement
No matter who wins Tuesday’s Labor leadership race and who forms the next government, the haredi (ultra-Orthodox) parties will be part of the coalition, Labor candidates said in a debate in Tel Aviv Sunday night.The debate, hosted by Labor’s Young Guard and emceed by journalist Dan Margalit, was the last chance for the eight candidates to reach out to voters ahead of the election. If no candidate wins 40% of the vote, a run-off race will be held next Monday.“In the next government, the haredim will be there and I hope we lead it,” said MK Omer Bar-Lev. “But anyone who tells you that when we lead the government all matters of religion and state will be resolved and there will be peace and love isn’t telling the truth. We will fight for public transportation and stores open on Shabbat, but not all of the problems can be resolved at once.”Incumbent Labor leader Isaac Herzog said Prime Minister Benjamin Netanyahu’s recent decisions on conversion and the Western Wall were horrible and that Netanyahu had betrayed the Diaspora. Nevertheless, he, too, admitted that he would want Shas and United Torah Judaism if he forms the next government.“I’ll tell you the truth as I told haredim ahead of the last general election,” Herzog said. “I want them in the government, but I will insist on pluralism and conversion.”MK Amir Peretz said the haredim needed to be told clearly that compromises would not be made on conversion.Former environmental protection minister Avi Gabbay said he intended to bring Labor enough votes to make concessions to Shas and UTJ unnecessary.“The haredim will go with Netanyahu as long as they can,” Gabbay said. “But, if we block Netanyahu from forming a government, they will have to listen to us and we will demand public transportation on Shabbat and other key issues.”All of the major candidates vowed to not join Netanyahu’s current government.Herzog, who tried to enter the current coalition in return for progress on the peace process, said he would not partner with Netanyahu after the next general election either.“There won’t be a national unity government in this government, and Netanyahu won’t be in the next Knesset,” Herzog said. “We will build a large enough bloc to stop him.”But lesser known Labor candidates said the better known ones were lying. Professor Avner Ben-Zaken said he was sure some of the candidates would be in Netanyahu’s government within a year.And socioeconomic activist Dina Dayan said: “It is wrong to make promises we will not end up keeping. The most important thing is to tell the truth.”Meanwhile, Meretz on Thursday night voted on party leader Zehava Gal-On’s proposal to hold open primaries in the party’s next leadership race. Gal-On told the attendees of the convention at the Tel Aviv Fairgrounds that 83% of Meretz voters backed the idea.Other speakers at the event spoke strongly against the proposal.Results were expected after press time.