Fund seeks to raise $60,000 for generator at orphanage. 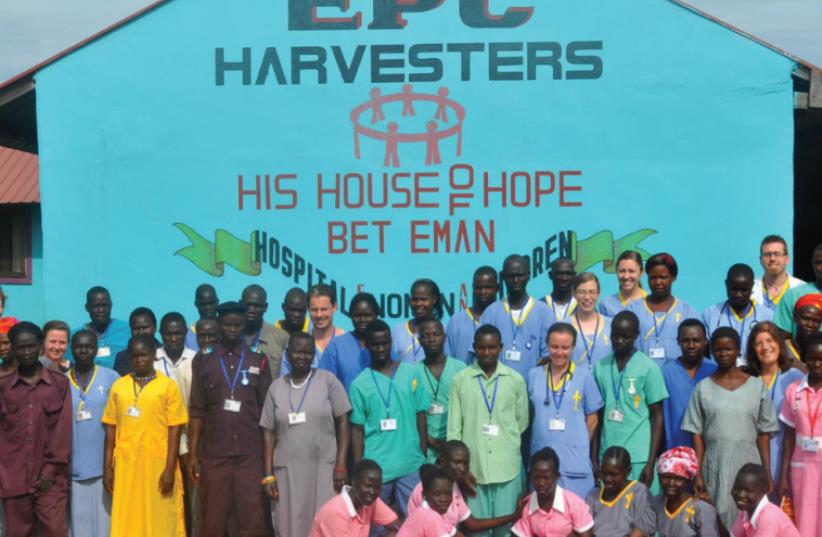 HEALTHCARE WORKERS at the Yei hospital in South Sudan.
(photo credit: HARVESTERS REACHING THE NATIONS)
Advertisement
Aiming to bring light and electricity to a South Sudanese orphanage, hospital and school, a Jerusalem-based international solar-energy developer is hoping to crowdfund sufficient means to install a generator at the site – powered by the sun’s rays.Energiya Global, an impact-investment platform that develops solar fields primarily in Africa, has teamed up with the Renewable Light Fund of the New York-based FJC: A Foundation of Philanthropic Funds to launch the online campaign.By donating the solar installation and a battery storage mechanism, the company hopes to double the electricity generation of the campus, located in South Sudan’s Yei region under the care of the Harvesters Reaching the Nations organization.Since getting started a few weeks ago on the Israeli crowd-funding website Crowdmii, the effort has raised about 6 percent of its $60,000 goal, with 105 days left to go.“Helping orphanages in Africa is part of our company’s DNA and this effort is a down payment on building for South Sudan’s large-scale solar fields, like Israel has in the Arava,” Yosef Abramowitz, CEO of Energiya Global and one of the founders of the Israeli solar industry, told The Jerusalem Post on Monday.Energiya Global is best known for its role in initiating East Africa’s first commercial scale solar installation, in Rwanda’s Agahozo-Shalom Youth Village. That field was developed in partnership with American-owned Dutch developer Gigawatt Global, which has a robust pipeline in sub-Saharan Africa solar projects, including a signed power purchase agreement in Burundi.The campus in South Sudan lacks sufficient electricity to adequately care for its population, with the hospital unable to refrigerate blood, vaccines and other equipment, and the school having no power whatsoever, according to Energiya.Yei is located about 150 kilometers southwest of Juba, close to the Democratic Republic of the Congo border.“The school currently has no electricity at all – they don’t have lights,” said Sara Halevi, director of communications for Energiya and the manager of the South Sudan campaign.At the moment, the existing energy supplies there include a polluting and constantly depleting diesel generator, as well as a small 16-kilowatt capacity solar unit and 12-kilowatt capacity storage battery, Halevi told the Post.Energiya is hoping to double the capacity of both the solar energy production and the battery storage, she explained.Regarding Energiya’s campaign, a spokeswoman for the Texas-based Harvesters Reaching the Nations expressed the organization’s gratefulness for the possibility of the new solar installation.“Our work in Yei is growing and it is imperative that current electricity be augmented with a new solar system,” she said. “Reliable refrigeration for the blood bank and medications in our hospital is critical and this campaign will bring lights to our primary school for the first time! Hundreds of orphans and other vulnerable children will benefit, as well as the thousands of women and children who receive care at our hospital.”Asked why the company became involved with the healthcare and educational campus in Yei, in particular, Halevi said she and her colleagues stumbled upon the opportunity there and found that it was an ideal match for Energiya.“We hope to replicate this same model in other places in sub-Saharan Africa,” she added. “We are targeting the poorest and most vulnerable populations.”The company also saw a clear advantage in turning to crowd-funding, over soliciting one solid donation from an individual philanthropist, Halevi explained.“The point of the concept of crowd-funding is that a lot of people get to own a piece of it,” she said. “That raises the awareness of the problem in the region.”