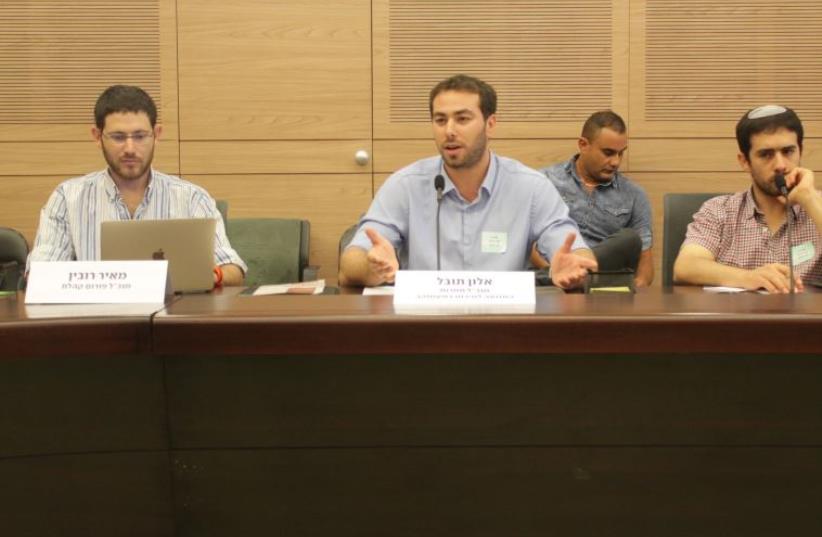 CEO and founder of 'Tacharut', Alon Tuval (center), speaks at the Freedom of Employment Conference at the Knesset.
(photo credit: UDI SHAHAM)
Advertisement
A conference led by MK Sharren Haskel (Likud) was held at the Knesset on Monday, aiming to promote freedom of employment and a strong free-market economy.The conference, organized by the Tacharut (Competition) movement and the Kohelet Policy Forum, was attended by dozens, including MKs and senior figures in the economic field, including Uriel Lynn, president of the Federation of the Israeli Chambers of Commerce (and a former Likud lawmaker); Dr. Michael Sarel, head of Kohelet; and Alon Tuval, CEO and founder of Tacharut.In her opening statements, Haskel addressed the practice of unionization.“Although it is presented as ‘freedom of assembly,’ sometimes it causes coercion on others,” she said of the practice. “It should be perceived as freedom – people should feel free to assemble or unionize in a way they see as right, and with whomever they choose. The way it is done now does not benefit the employee.”Referring to the labor courts, Haskel said: “Each time, we see the how the court rules in favor of the Histadrut [labor federation]. It is outrageous.”Tacharut’s Tuval told The Jerusalem Post that the existing legal situation, which grants tremendous power to labor unions, has severe implications on the way the public administration operates.“The power balance between a given union and an employer, including Israel’s biggest employer – the state – leans remarkably toward the unions’ side, which act de facto as a powerful cartel,” he said. “Our goal is to create a balance between those unions and public.”Tacharut was founded in early 2016 to speak on behalf of those not unionized under the Histadrut.“The way the system works now is that the Histadrut prevents individuals from negotiating for themselves. By doing so, a third of the employees at a certain workplace can impose their will on the majority, under the umbrella of the Histadrut,” Tuval explained.“Moreover, the labor courts do not recognize large organizations as legal representatives of employees, mainly because of ideological issues,” he claimed.The street demonstrations that swept the country in 2011 raised public awareness about social and economic issues, and increased demands for reforms in the public administration.“The main problem is that the labor unions, which hold too much power in their hands, in our opinion, are preventing these kinds of reforms,” said Tuval. “For instance, the 1996 reform in the Israeli Electric Corporation, which could have opened the electricity market to competition, was postponed because of the labor unions.”Other examples he cited included attempts to increase efficiency at the Airports Authority and attempts to upgrade the computer system of the Israel Lands Authority.“All were blocked by the labor unions,” Tuval charged. “All of that can save a large amount of money to the public purse, and can make state-run services much more efficient.