Proponents of the bill say it's meant to keep the capital united, but the text allows for dividing it. 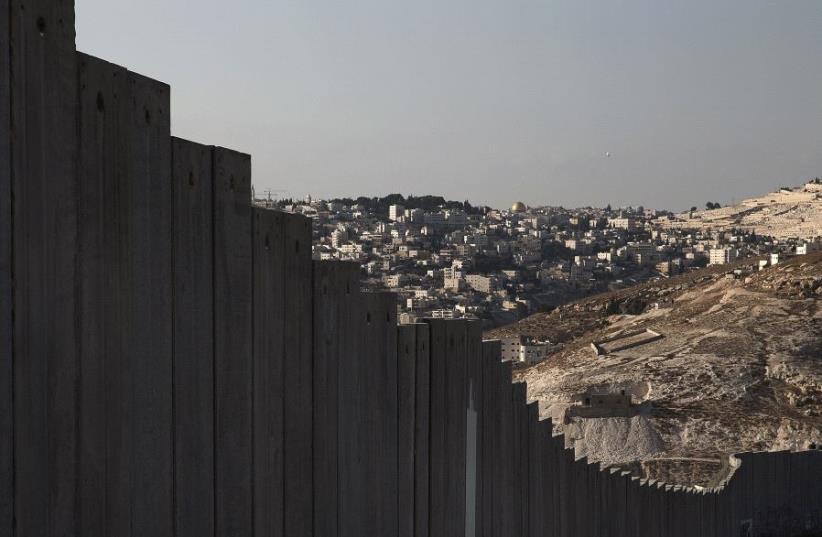 The security barrier leading up to Jerusalem
(photo credit: FINBARR O'REILLY / REUTERS)
Advertisement
Legislation meant to keep Jerusalem united, but which allows for the exact opposite, passed a first reading, 51-41, on Wednesday in the Knesset.The bill’s proponents, foremost Education Minister Naftali Bennett, have nicknamed it the “united Jerusalem bill,” saying it sets a near-impossible standard for a prime minister to be able to concede parts of the capital in negotiations: approval by 80 out of 120 Knesset members.However, the bill also allows for Jerusalem’s municipal lines to be redrawn, such that areas of the city would remain under Israeli sovereignty but no longer be part of the capital. Then, if a government chooses to concede those areas, it would only be subject to a national referendum as is the case for any sovereign Israeli land, but not the two-thirds Knesset vote that is just for Jerusalem.Predominately Arab areas of Jerusalem, such Kafr Akab and the Shuafat refugee camp, could be likely candidates for this treatment.In addition, the article requiring a two-thirds vote to divide Jerusalem can be canceled by a 61-MK majority.Bayit Yehudi MK Shuli Moalem-Refaeli, who submitted the bill, said she drafted the bill in light of past cases in which concessions were pushed through without Knesset approval.“I call on all MKs who see Jerusalem as the eternal capital of the Jewish people to support this law,” she said.MK Miki Rosenthal (Zionist Union) came out against the initiative, saying: “I have a great love for Jerusalem, but when we dreamed of Jerusalem, we didn’t dream of Sheikh Jarrah.Arab neighborhoods weren’t part of Jerusalem. I think most of us are united over Jerusalem in its real borders.”MK Michal Biran, also of the Zionist Union, called Jerusalem a “microcosm of what’s happening in the whole country” demographically.“People can’t imagine that there will be an Arab mayor of Jerusalem,” she said, turning to Bayit Yehudi lawmakers and saying: “You keep accusing us of dividing Jerusalem, but you really are.”Joint List MK Jamal Zahalka said the bill is trying to prevent negotiations with the Palestinians.“No Palestinian leader will give up on Jerusalem. Whoever votes for this is voting for eternal war, the burial of the dream of peace that many in this land still dream,” he said.Zahalka proceeded to deny the Jewish connection to Jerusalem, and the debate deteriorated into a shouting match between him and Moalem-Refaeli, before he walked off in a huff.Jerusalem Affairs Minister Ze’ev Elkin closed the debate by pointing to the law the Jerusalem bill amends, which requires a 61-MK majority to divide the city. It passed in 2000, and some of today’s opponents enthusiastically backed it, despite it being of the same spirit.Elkin read from a speech given by MK Tzipi Livni, then of the Likud and now of the Zionist Union, in which she said she was honored to be involved with the legislation.Opposition leader Isaac Herzog (Zionist Union) was cabinet secretary at the time, and then-prime minister Ehud Barak’s coalition supported the initiative.“In 2000, Labor knew that a party that claims to be Zionist can’t lend a hand to harming Jerusalem,” Elkin said. “In the last 17 years my friends in the Labor Party lost their basis in Zionism. Before it’s too late, read what Labor MKs did then and remember that a party trying to be Zionist, if it betrays Jerusalem, even the name Zionist Union won’t help.”