Lapid warned US that MOU could backfire

Lapid did not endorse anyone in the American election, but he did make a surprising statement about the race for UN secretary-general. 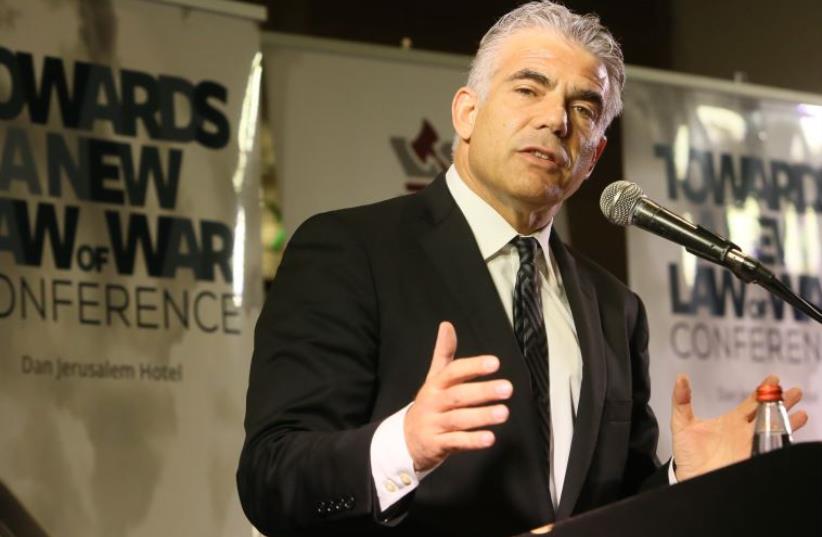 Yair Lapid at 'Shurat Hadin' conference in Jerusalem
(photo credit: ODED ANTMAN)
Advertisement
Yesh Atid leader Yair Lapid told senior officials in US President Barack Obama’s administration that the new defense aid package to Israel could be remembered very negatively by Israelis, Lapid said Wednesday night in a conference call with the Israel Policy Forum.Lapid warned the Obama administration officials not to allow a clause in the defense pact that allows part of America’s defense aid to Israel to be spent in Israel to be phased out over the next five to 10 years.“I think it would be a mistake,” Lapid said. “The United States may end up giving us $38 billion dollars, and the only thing Israelis will remember from the deal is the unemployment line in Karmiel and other places in the periphery.”During a visit to Israel Aircraft Industries headquarters earlier on Wednesday, Lapid called upon Prime Minister Benjamin Netanyahu to see what he can to protect thousands of Israeli jobs in the defense industries.“We are past the moment of truth in the negotiations,” Lapid said on the visit. “I call upon the government to ensure that the Israeli defense industries will be given proper recognition in the agreement with the United States.”Although he said he has a policy of not criticizing the prime minister when he speaks to foreigners, Lapid accused Netanyahu on the conference call of preventing Israel from receiving a much larger defense package, because he spoke against the Iran deal in Congress in March 2015. Lapid said that had Netanyahu reached a deal with Obama then, the aid could have been $50 billion over ten years, instead of $38 billion.Lapid also accused Netanyahu of alienating American and Reform Conservative Jews with his government’s policies on religious pluralism and matters of religion and state.“Israel should acknowledge that most US Jews are Reform and Conservative,” he said. “This government insulting Reform and Conservative Jews is agonizing for me.Israeli security is based among other things on American Jews telling their congressmen ‘you have to take care of my people.’ We can’t lose the voices in the American arena that help protect Israel.”Lapid said Israel should set goals of being more bipartisan and rehabilitating its relations with American Democrats.Regarding concerns in Israel that Obama could take steps that could harm Israel between the November 8 US election and the inauguration of the next president on January 20, Lapid said “that transition time has always been dangerous for us.” He said he hoped the Obama administration would not allow anything anti-Israel to be passed in the UN Security Council that would be counterproductive, adding that he had very little faith in the French initiative becoming tangible.In more criticism of Netanyahu, Lapid said “Israel needs a foreign minister with better dialogue with the State Department and the White House,” and that “better manners” were needed than have been displayed in dialogue between Netanyahu and Obama over the past several years.Lapid did not endorse anyone in the American election, but he did make a surprising statement about the race for UN secretary-general.“I hope the next UN secretary- general will be a she,” he said.