Liberman heads to US amid aid talks crisis

Netanyahu: More than anything we need to be able to defend ourselves by ourselves. 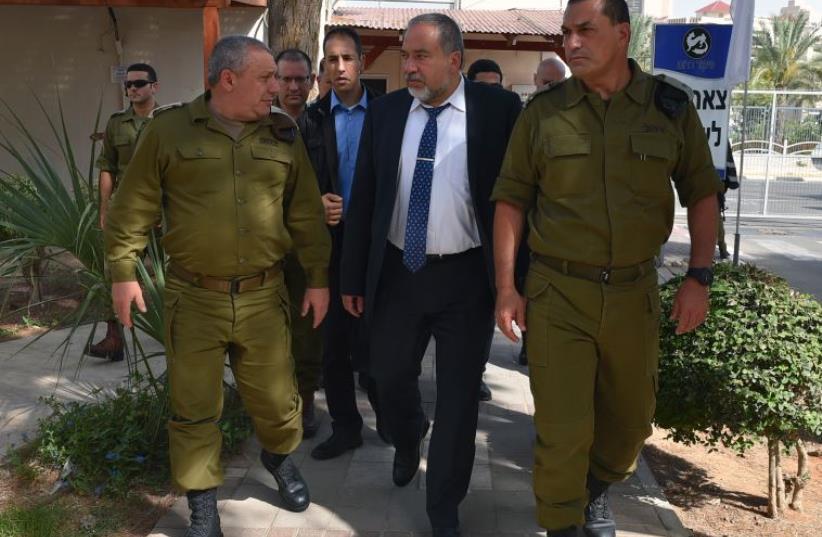 Liberman and Eisenkot at IDF Southern Command
(photo credit: ARIEL HERMONI / DEFENSE MINISTRY)
Advertisement
Defense Minister Avigdor Liberman is set to make his maiden trip to the US in his new role on Saturday night, going to Washington for talks with Defense Secretary Ashton Carter that are sure to deal with the framework agreement for military aid to Israel – the 10-year Memorandum of Understanding – being negotiated.Yaakov Nagel, the acting head of the National Security Council, told reporters on Wednesday that the negotiations were in their final phases. Key players in Jerusalem, meanwhile, are urging Prime Minister Benjamin Netanyahu to sign the new agreement with US President Barack Obama, and not to wait for the next president.And Deputy Secretary of State Antony Blinken said on Wednesday at the Herzliya Conference that the US was ready to give Israel “the largest single pledge of military assistance from the United States to any country in our history, cementing an unparalleled security relationship all the way to 2029.”Under the current MoU, which will expire in October 2018, Israel has received some $3 billion a year in military aid for the last decade, plus an average of $400 million a year in supplemental missile defense aid. Under the MoU being negotiated, the supplemental aid is expected to be bundled together with the annual assistance.The two outstanding issues still to be agreed upon are the amount of the annual aid, as well as how much of it can be transferred into shekels and spent in Israel. That level today stands at 26.3 percent, with the US wanting to decrease that proportion significantly.Netanyahu met on Thursday with Blinken, who is heading a 19-person inter-agency US delegation holding its biannual strategic dialogue with Israel, whose team is headed by Nagel and Foreign Ministry director- general Dore Gold.At a memorial ceremony for the Altalena in Tel Aviv, Netanyahu said he came from an “important meeting” with Blinken and his team.Netanyahu said the he could not go into details of the discussions, but that the atmosphere was “very good” and “very positive.”“As partners in a strong alliance, the discussions there dealt with the many challenges in the region and the solutions to those threats,” the prime minister said.Netanyahu said that he greatly appreciated the US for its support of Israel, “but with that – as a student of [Revisionist Zionist leader Ze’ev] Jabotinsky, and also of Menachem Begin, I believe that more than anything we need to be able to defend ourselves by ourselves.”Liberman, while in the US, will travel to Fort Worth, Texas, and the Lockheed Martin plant there to participate in the rollout ceremony of the first F-35 fighter plane that is expected to be supplied to Israel in December.Israel plans to buy at least 33 of the fifth generation fighter planes. Liberman will also go to New York to hold meetings with the Defense Ministry’s acquisition delegation there.