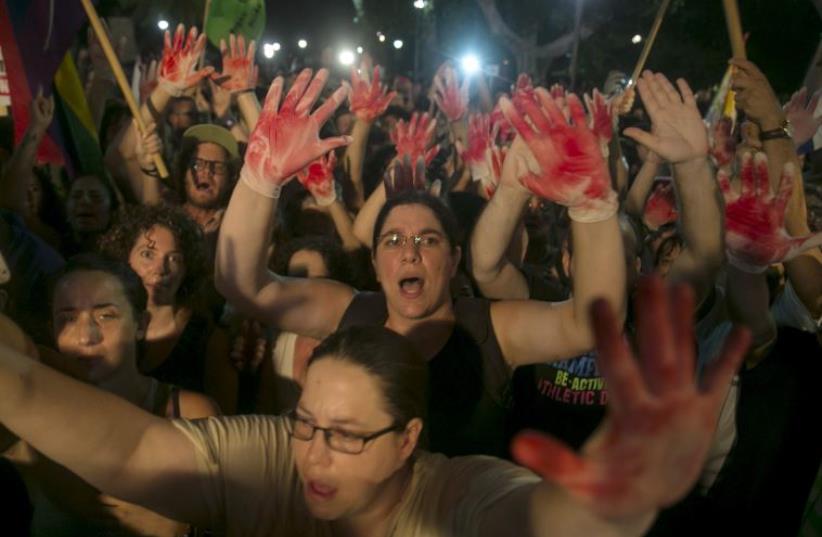 Protesters hold up gloves covered in red during a protest against the violence towards the gay community in Tel Aviv August 1, 2015
(photo credit: REUTERS)
Advertisement
Lehava is a racist group and violent group that must be outlawed, MK Ksenia Svetlova (Zionist Union) wrote in a letter to Attorney-General Yehuda Weinstein on Tuesday.The organization’s name is an acronym for “preventing assimilation in the Holy Land,” and Lehava pursues that agenda mostly through protesting intermarriage, but it demonstrated against last week’s LGBT pride parade in Jerusalem, at which six people were stabbed. Also, two of Lehava’s members have been convicted of setting fire to an integrated Jewish-Arab Jerusalem school and others were arrested on suspicion of inciting racial hatred.
Lehava"s Meir David Koperschmidt slams homosexuals ahead of Jerusalem pride parade
“Lehava’s activities are fertile ground for crime, bullying, inhumane and harmful activity towards weak populations in Israel, including new immigrants, the LGBT community, migrants, non-Jewish people, non-Jewish spouses of Jews, and in general, whoever does not follow the line they drew and do not match their one-dimensional, racist, exclusionary and discriminatory worldview,” Svetlova wrote to Weinstein, the Registrar of Non-Profit Organizations, and the National Fraud Investigation Unit.Svetlova called Lehava a leading incitement organization, which by definition is illegal.The MK also said Lehava is not registered as an NGO, rather, it receives funding from The Fund to Save the People of Israel, which is led by Lehava CEO Benzi Gopstein and Ayala Ben-Gvir, wife of Kahanist activist Itamar Ben Gvir.The Knesset plans to hold a Zionist Union-initiated plenum discussion of last week’s hate crimes on Tuesday, during its recess.Zionist Union faction chairwoman Merav Michaeli said, upon requesting the meeting, that, “The two horrible hate crimes of Jewish terrorism must be discussed in the Knesset.We will demand from the prime minister and the rest of the extreme-right nationalist leaders to present to the Knesset actions to eradicate Jewish terrorism and not empty declarations.”Similarly, Svetlova wrote that, “We need actions. We spoke enough. Many MKs, as well as myself, demand that Lehava be outlawed as soon as possible.”According to Svetlova, who witnessed the stabbing, the two attacks that took place last week did not happen in a vacuum, but rather in an atmosphere of conflict between different population groups, and Israeli society must counter that by promoting equality, social justice, and tolerance. She quoted the verse from Proverbs that God’s “ways are ways of pleasantness and all its pathways are peace” and said anyone acting against values of peace and justice are harming Israel as a Jewish and democratic state.Earlier this year, Defense Minister Moshe Ya’alon said he was considering outlawing Lehava.Last week, shortly before the LGBT parade, Lehava representative Meir David Koperschmidt told The Jerusalem Post that homosexuality “destroys the Jewish nation” and threatens Jewish families, and gays need to seek help rather than march in a parade.Meanwhile, MK Revital Swid (Zionist Union) submitted a bill that would keep perpetrators of hate crimes under supervision when they’re released from prison, like sex offenders.The proposal came after Yishai Schlissel, who was released from prison less than a month ago after serving 10 years for stabbing marchers in the 2005 Jerusalem LGBT parade, committed the same crime again on Thursday.“Criminals who commit hate crimes on the basis of religion, race, gender, and sexuality are a ticking time bomb,” Swid wrote on Facebook.“Recent events taught us that hate criminals are recidivists. Their worldview does not change because of imprisonment.”“We must prevent the next hate crime,” she added.