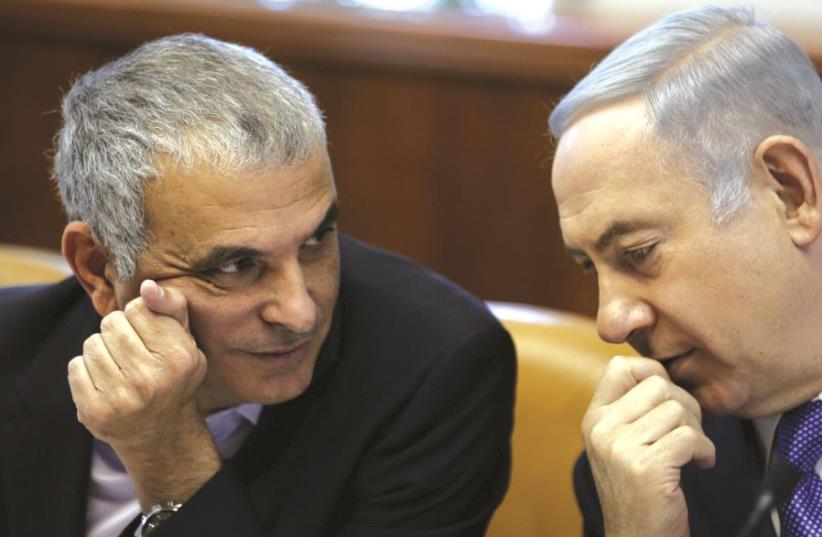 Moshe Kahlon (left) and Benjamin Netanyahu (right).
(photo credit: REUTERS)
Advertisement
Amid last-minute objections and protests from government ministers and haggling with Treasury officials, the cabinet was likely to approve the 2019 state budget late Thursday night or early Friday morning, according to an official from the Prime Minister’s Office.The draft 2019 budget, released on Monday, totals NIS 479.4 billion ($140b.) in expenditures, a 4% or NIS 20b. increase from last year. It includes some NIS 100.7b. for debt repayment and NIS 39.1b. for interest.Speaking earlier in the day at the Globes Israel Business Conference in Jerusalem, Prime Minister Benjamin Netanyahu said that the budget would contribute to Israel’s above-OECD-average economic growth, with predictions for 3.5% GDP growth next year.“Today, we will pass the [first reading of the] budget, and in two-months’ time, we will pass it on the second and third readings in the Knesset. This [budget] gives us stability, provides us a basis for growth, and gives us a basis for taking care of diverse security and social needs, as well as the needs of the State of Israel.”Several cabinet members have publicly criticized the budget for proposed cuts to their ministries, including Culture Minister Miri Regev, Science and Technology Minister Ofir Akunis and Public Security Minister Gilad Erdan. Another dissenter is Interior Minister Arye Deri, who boycotted the cabinet meeting in protest of proposed cuts to religious affairs, which would see NIS 11 million taken away from adult Torah learning.Most coalition partners are not expected to bring up major objections prior to voting on the budget, making it likely that the cabinet will approve it.Afterward, it is sent to the Knesset to be voted upon. Kahlon and Prime Minister Benjamin Netanyahu took the unusual move of passing a 2019 budget nearly a year in advance in order to stabilize the coalition, which won’t have to deal with another budget before an election is legally required – in November 2019.Among the reforms in the budget are greater subsidies for nursing, lowering the price of private surgeries, shortening Passover and Hanukka school vacations for children up to the third grade, reducing the use of cash, and possibly launching exports of cannabis abroad.Some people who may lose out under the new budget include Diaspora Jews moving to Israel. New immigrants whose household assets are estimated at being worth more than NIS 500,000 will not be eligible for the absorption basket. The new restrictions will only apply to immigrants moving to Israel after January 1, 2019, and the move could save the government some NIS 130m.The Foreign Ministry also protested, slamming a proposed cut of NIS 40m. over the next four years, with dozens of diplomatic missions facing closure and many positions being eliminated. Ministry officials said it would undermine Israel’s public diplomacy at a time when worldwide delegitimization is on the rise.Other cuts include taking away NIS 10m. from the Settlement Division of the World Zionist Organization, reducing its budget from NIS 36m. to NIS 26m.; deducting NIS 10m. from the Agriculture Ministry’s rural development grants; and cutting NIS 30m. from the Education Ministry’s training program.The budget also proposes a deficit target of 2.9% of GDP, exceeding the legal target of 2.5%. That led the central bank to criticize the profligate spending during a time of economic growth.“It is not wise to raise the deficit target to a rate that will... increase the debt-to-GDP ratio,” said Bank of Israel Gov. Karnit Flug at the cabinet meeting on Thursday. “Increasing the target to levels even higher than proposed, under the current macroeconomic conditions, will constitute a negative signal to the markets.”Notably, the 2019 budget allocation for education is projected to be greater than that for defense, with spending for schools set at NIS 57.1b, followed by defense allocations totaling NIS 55.7b. and National Insurance costs at NIS 44.2b.In the past five years, the education budget has increased by 38%, or NIS 16.6b, while the defense budget went up by 37%, or NIS 15.4b.“The budget that we are bringing today to the government is a social budget that focuses on the growth of the Israeli market and the strengthening of the economy,” Finance Minister Moshe Kahlon said at the beginning of the cabinet meeting. “It is growth that allows us to bring social goods... to the right places and to people who have been forgotten for too many years. This budget continues the social revolution.”In terms of welfare spending, the budget does not seem to include plans to significantly increase welfare disability payments, despite government promises to the contrary. That has led to disability-rights activists to continue their public campaign of blocking highways in protest.