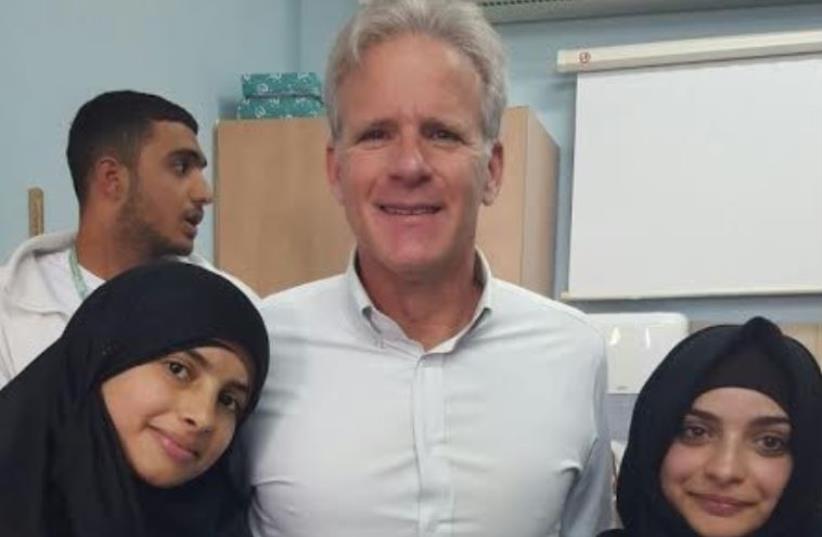 MK Michael Oren with Beduin women who participate in national service today in the Negev
(photo credit: ANNA OLIKER)
Advertisement
Kulanu MK Michael Oren on Sunday urged the government to address issues in the Beduin community to prevent further infiltration by Islamic State as he toured the Negev on Sunday meeting with Beduin soldiers and women national service volunteers.“The Beduin community offers immense challenges to the state of Israel but also offers great opportunities.The state can either meet the challenges intelligently and sensitively or other forces will fill the vacuum, including Islamic State,” Oren told The Jerusalem Post.The Kulanu MK has introduced legislation granting lone status benefits to Muslim and Christian soldiers who face opposition from their communities due to their service. On his tour, he visited Soroka Medical Center in Beersheba where Beduin women perform their national service.In the last few decades, he said, there have been twin processes among the Negev Beduin: Islamization and increased Palestinian nationalism.“The state left a vacuum. I meet people today who want to be part of Israel,” he said, calling it a struggle for “awareness.”“If we are smart, they will become very productive citizens of the state,” he said.Oren added that he plans to learn more about the Beduin issues, in particular the ongoing government effort to resettle the Negev Beduin, and deal with hundreds of illegal settlements.The Beduin women serving at Soroka, he pointed out, face tremendous difficulties, the main one being just getting there since there is no bus service from many of their villages scattered across the Negev.“There is an immediate need for 200 additional positions for national service,” Oren stated, adding that there is much more demand than supply for the program.The former ambassador to the US also commented on the difficulty for Beduin who complete their military or national service in finding work and integrating into Israeli society.“We are not maximizing the investment” in the Beduin sector, he asserted, noting that he lived in the Negev in the past and that Israel cannot afford to ignore 62 percent of the country, which contains one of the fastest growing populations on the planet.Othman Abu Ajaj, the head of the Beduin section at the Beduin Development Authority, which deals specifically with the land issue and has offices in Beersheba, accompanied Oren on the tour.Ajaj, who is responsible for creating the Beduin national service program, which came up against strong opposition, said he has received multiple threats, including telephone calls, adding that he carries a weapon.Asked if he is scared to continue, Ajaj responded, “I already have been doing this for five years and will continue.”He explained that five years ago the program began with just four girls but eventually grew to hundreds, though there is a lack of budget to provide more places.“This is the best platform for the Beduin in the Negev to integrate,” to contribute and to receive benefits, he continued.Asked about the controversy over solving the resettlement of the Beduin, he argued that it could be solved through dialogue.Addressing the infiltration of the Islamic Movement among the Negev Beduin, Ajaj said the group’s presence has gotten stronger and has started to control local education and called on the state to strongly supervise Beduin education and invest in it to create hope.