Contrary to the widespread sentiment shared by media commentators, Moshe Ya'alon wasn't blindsided by the move to fire him in favor of Avigdor Liberman. 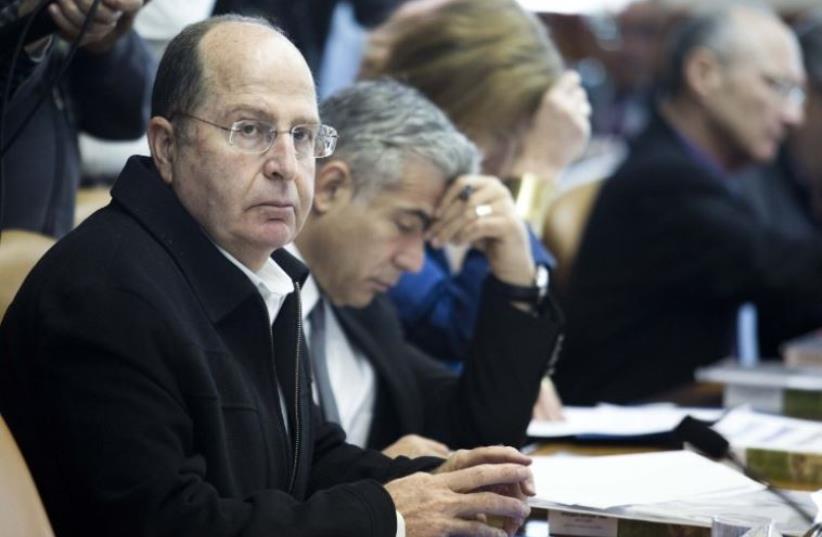 Defense Minister Moshe Ya'alon (L) looks on during a cabinet meeting in Jerusalem
(photo credit: AFP PHOTO)
Advertisement
The eyes of the soon-to-be-former defense minister Moshe Ya'alon told the whole story. It was as if the light had been switched off. The eyes told a story of hurt. They were a window to the months-long ordeal that had befallen him.Contrary to the widespread sentiment shared by media commentators, Ya'alon wasn't blindsided by the move. What did take him by surprise was the manner in which it was executed. "If only the prime minister had called him in to his office and explained to him the political challenges that he faced and had asked him to sacrifice his post for the sake of political survival, it would have ended differently," a Ya'alon associate said. The minister was cognizant of the headlines in the press and the coalition talks that Prime Minister Benjamin Netanyahu was engaged in with Isaac Herzog. These negotiations were ongoing for weeks. He also knew that behind the scenes there were those who had expressed the desire to see Avigdor Liberman enter the government instead of Herzog. Ya'alon also heard the calls from within his own party and other parties in the coalition wishing for his ouster from the defense minister's job. Some of these calls were overt, while others were made directly to the prime minister in private. He understood that his position was tenuous even as far back as after the previous elections last year. That was when Bayit Yehudi head Naftali Bennett cast a ravenous gaze at Ya'alon's seat. Ya'alon even demanded clarifications from the premier that his job was safe. That is why this week's events did not take him by surprise.Ya'alon saw how the pressure was building up on Netanyahu in recent weeks. That is why he chose to send his boss a message this past Independence Day, when he hosted the Israeli military high command at the Defense Ministry compound in Tel Aviv. He took advantage of the opportunity to implore the officers to speak their minds without fear of criticism. This was a clear, unequivocal message to the senior IDF leadership, but it was also intended for the ears of the prime minister. It was as if to say, "I'm here, and I'm not to be taken for granted."Netanyahu elected to exploit this opportunity in order to castigate his defense minister, although the end result was a laconic joint statement. "This story is behind us," the two men announced. If only that were so. This story was right in front of them, sitting there on the table.Ya'alon was an excellent defense minister. This is beyond dispute. When it came to job performance, he scores a perfect 10. On the political side, however, he was never at ease. When it comes to politicking, he deserves a three. He never knew how to walk the tightrope between being the defense minister of the State of Israel and being a member of the Likud central committee. When he publicly took a stand against the extremists and fulminators, they excommunicated him. The straw that broke the camel's back from Ya'alon's perspective was the demeaning attitude broadcast by Netanyahu toward the job. Ya'alon stood aside and watched as the prime minister was hawking the Defense Ministry as if he were manning a stall in an open air market. Defense minister is one of the most sensitive jobs in the entire Middle East, and the most sensitive position in the Israeli government. Watching Netanyahu barter with it hurt him personally. The treatment he received as a Likud member – the most loyal Likud member to the premier – was not as hurtful. But the give-and-take surrounding his job simply broke him."There's no chance he'll participate in the ceremonial changing of the guard at the Defense Ministry," a ministry employee said. "He won't give Liberman the satisfaction. There also won't be on-the-job training to ensure a smooth transition. Liberman can forget about that."Ya'alon faxed his letter of resignation to the Prime Minister's Office on Friday so that Netanyahu can hand over the reins to Liberman. Ya'alon could have waited until Sunday morning, but instead chose to dedicate this time to the one place where he garners respect – the General Staff of the IDF. One after another, the generals of the IDF will stand and salute the departing defense minister, a commander who gave them his full backing over the objections of the Likud central committee. He chose them rather than cheap populism.